Lauren Wilcock In A League Of Her Own 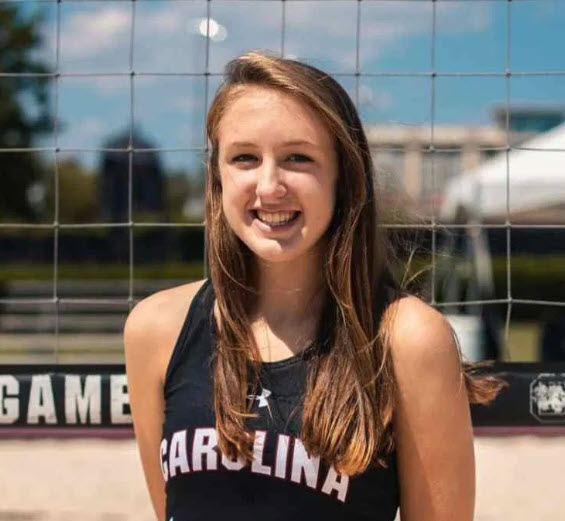 So just how good a volleyball player is Lauren Wilcock from Mendham? From our seat, she will be the leading candidate for player of the year honors in 2020. She will be playing beach volleyball for University of South Carolina in Fall 2021 after she graduates having committed when she was a sophomore. When you think of the very top female volleyball players in the state for 2019, a handful of names come to mind. Anna Morris, Jenna Rogers, Nylene Mateo, and Lauren. But Lauren was the only junior in that group. She is a leader and has a high reaching goal of getting back to the state championship game this year, with different results of course.

Lauren’s affinity to the beach is quite evident. Despite her amazing hard court skills, she is most comfortable on the beach and will be an outstanding addition to the Gamecocks program. Her advanced training programs offered in the Carolina’s will continue to hone her skills as she preps for college.

This year will be a special one for the Wilcock’s. It will be the senior year for Lauren and the sophomore year for her sister Sarah. It will be the last season to join family forces at Mendham and the stage is set for it to be a special one. Sarah has already shown signs of following in her sisters footsteps putting up a monster freshman year as setter for the Minutemen with 441 assists, 122 digs, 75 kills and 20 aces. It’s one more of those potential magical dynamics that can set the stage for a brilliant 2020 season.

NJP tries to come up with adjectives that describe our players in our interviews. The one word that comes to mind with Lauren is “fearless”. She possesses the confidence and the attitude to accomplish just about anything she puts her mind to. She sets high goals for herself and has achieved so much so far. NJP’s advice? Don’t bet against her.

Here is our interview with Ms. Wilcock…

Tell us a bit about yourself Lauren?

My name is Lauren Wilcock and I am a rising senior at West Morris Mendham High School. I will be graduating in 2021. My Mom and my Dad met playing volleyball and I have a younger sister, Sarah, who also plays at Mendham.

I started playing volleyball at a very young age because my Dad played every weekend. My first official summer clinic was when I was seven years old. Volleyball was more of a hobby for me for quite a while when I played basketball. When I was twelve, I decided to play volleyball full time on an indoor national team. I played two years up on a 14U national team at a club in New Jersey. I then started playing beach as a way to cross train for indoor volleyball. However, I ended up liking it much better. I now play beach volleyball for Sinjin Beach in North Carolina and I am part of the P1440 Junior Elite National Team.

What are your metrics/details? Height, vertical, position, club team, etc.  What’s your favorite position to play?

My height is 5 feet 10 inches. My vertical is 21 inches. For Mendham, I play as a full rotational outside hitter. I absolutely love playing my position, but I always thought it would be fun to be libero or a setter.

How are you and your family dealing with the current world situation with COVID-19? Are you expecting a normal Fall high school season schedule?

My family and I have been staying home for the past few months, but recently travelled down South to train with some clubs for beach volleyball. I hope we can have a normal fall season, I think the likeliness of us having one is going up. On the other hand, who knows how normal it may be. Maybe there will only be players and no fans, more sanitization of the volleyballs, no high fiving, etc.

How will your high school team do in the upcoming season? Do you have a lot of returning players? What will be the key to success? Tell us about your teammates. Who do you expect will be this year’s standout and up and coming players?

I think we have a good chance of claiming the state title again this year. We have a lot of returning players this year. We lost Lauren Casignetti (middle blocker) and Julia Trzesniowski (defensive specialist) and these are some big losses, but I know many other underclassmen are eager to work hard to earn those available spots. My teammates are amazing and we have so much fun together. Our team did so well last year because of how we were able to figure things out on the court as a team and lift each other up when we needed it. Mendham will definitely have a few standout players this year. One being my sister, Sarah Wilcock, who had an amazing season last year, she was able to adjust on the fly and execute perfectly when we needed her to. She put up some amazing stats last year as a freshman with 441 assists, 122 digs, and 75 kills.

Another standout player would be Cat Holtz, she was Mendham’s other outside hitter but she also plays middle and is a phenomenal blocker. Cat was thrown into the outside position unexpectedly last season and handled it like a pro. She finished the season second in kills with 225. Some up and coming players are Ally Blackwell, Brittany Giles, and Katie Gionco. Ally is a middle blocker and rightside who was pulled up to varsity last year and worked so hard the whole season. She came early to practice and stayed late and will be a force to be reckoned with this season. Brittany Giles and Katie Gionco were on JV last year, both liberos and they will be extremely helpful on the defensive side of our team. Both are very scrappy and have great ball control. We also have Michele Kifyak and Poppy Skjonnemand as returning players this season and they will be great contributions. I’m so excited for this season and can’t wait to see how the team shakes out this year.

Wow, the journey of the previous season was insane and one I will never forget. I guess you could call us the underdogs. During the regular season, we didn’t have a standout record and no one really saw us as a threat. As we neared the end of our conference, we saw that we could win it and kicked it into high gear. We won our last game of the regular season and became NJAC Conference Champs, which was only the very beginning of our journey. Then came counties which we had not won in eight years. We felt pretty confident until we had to play West Morris Central in the semis. After winning that game we knew Kinnelon would be tough.

Luckily we had a huge fan section thanks to the Mendham Moshpit, which really helped keep our spirits up throughout that game and in the end clinch the title. Next was states, which seemed like a far off dream, considering the fact that Mendham volleyball had never won a state title. We had our first two rounds of states at home and we had a packed gym with fans. However, our quarterfinal against Old Tappan was our first real test. They were one of the best teams in the state, much bigger and much more physical than we were. No one would have bet on us that day. We won that game in a tight three setter. Then was Colonia, an amazing defensive team to combat our offense. Once again, we won in a tight three setter.

I’m not sure we would have been able to pull this one off without the help of the Mendham Moshpit and the entire community’s support. Our next game was against Wayne Valley, the state finals, we won in two sets, probably the easier of our games in the state bracket. As we went into TOC, we didn’t expect much, we just went out to have fun and play the sport we love. We won the first round against Williamstown and lost a close two sets to IHA in the finals. Overall, this journey last season was amazing and it changed the culture of Mendham volleyball forever.

During that run, you put up some amazing statistical numbers leading your team to success. What are your personal expectations of your senior year?

My personal expectations of my senior year are very high, I’m always working hard and pushing myself to be better. Obviously, I would love to hit the 1,000 kill mark. I was injured my freshmen year and barely played, so I would have to hit 300+ kills this season. But I am up for that challenge. I would also like to win counties, states, and TOC this year. As you can tell, I have very high expectations for our team this year.

My support group is my Mom and Dad. They both played sports and understand the time and hard work it takes. I love always talking to them after games to discuss how we played, how the other team played, etc. It’s also been a lot of fun to be able to play with my sister. I also want to shout out the Mendham Moshpit, our school’s group of sports fans. They dressed up for our games and drove an hour plus to come cheer us on at States and TOC.

Beach. 100%. I love the strategic aspect of the game and the fact that there are less people, which means more touches. Also, the setting of playing on the beach is a perk.

Yes, last year I was 1st team All County and 1st team All State. I also was named the MVP of Mendham Volleyball and the MVP in the Morris County finals.

What is your favorite inspirational video that you like to watch before games?

I don’t really have a favorite inspirational video, but I love music. Some of my favorites to listen to before a game are “Back in Black” by ACDC and “Bennie and the Jets” by Elton John.

Yes, I committed to play beach volleyball at University of South Carolina in September of my sophomore year.