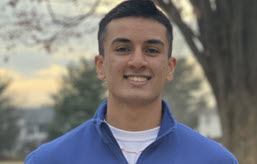 Nithin Kumar is too humble to admit it, but when you think of Most Valuable Players to their team, his name should surface quickly. When we spoke with him it was very clear that he has his priorities in order and his goals set high, both personally and for volleyball. NJP has interacted with hundreds of athletes over the last decade and it was awesome to see that he has an academics comes first attitude which was quite refreshing. And equally as refreshing to engage with a leader who puts his team first as a mentor for younger players and making a contribution to the future of his team after graduation.

Last season, Nithin had stellar numbers which earned him NJP First Team All State honors. His numbers per set in all categories were near the top in the state. He led WWPN in every statistical category accept assists with 240 kills, 29 blocks, 36 aces and 141 digs. All of this was accomplished as a junior and in just 47 sets on a team that went 7-14 overall. Extremely impressive.

This year WWPN returns 9 varsity players and NJP has the North Knights back in the top 50 in their preseason ranks. https://njpowerranking.com/wwpn-2020-psr/

It is very clear that Nithin has an amazingly bright future ahead of him as you will see from his thoughtful answers below. And for opponents in 2020, beware of that big left arm coming at you at lightning speed…

Here is our interview with Nithin…

At first, it was just fun passing back and forth with my brother in the backyard, but that transformed into a passion for the game once I began playing for the school team in High School.

Soon enough, I really loved the sport, and found ways to keep playing, whether that be with teammates at local sand court parks, or at open gyms.

Tell us more about yourself…

I am a senior at West Windsor Plainsboro High School North, Class of 2020, and live in West Windsor with my Mom, Dad, and older brother.

My Mom and Dad definitely were big supporters as they supported me playing volleyball, drove me to and from practices and helped in any way they could. My brother was probably the most influential supporter as he taught me the game from the start, and has always given me tips, tricks, and major support whenever I need.

Coach Michael Villafane and Anthony Venanzi: Venanzi was my JV coach as a freshman, coach Villafane was my varsity coach as a sophomore. They both taught me a lot about the game. Coach Villafane helped me develop strong habits for the game as well as character.

Coach Luiz Tessarotto and Ryan Lagomarsino: Coach Luiz was my varsity coach last year, and will be this year. Coach Lagomarsino (Lags) was the new JV coach last year. Both coaches have supported me throughout my journey and helped with whatever I have needed. Coach Lags works in the school, so I always see him and talk to him about anything. Coach Lags helps me get new players to tryout and play volleyball, as well as supports my vision for the future volleyball program at our school, and helps create fundraisers.

Our team only graduated 2 starters from last season, so we have the majority of our starters back. If our team finds our rhythm and are able to play cohesively, we will definitely do damage this year. We have serious potential to make the state tournament, win the conference tournament, and much more. The key to our success will be how effectively we use our practice times, and how we perform when it comes down to game time. We definitely have the potential, it’s just a matter of putting the pieces together for a winning season.

My school is amazing! WWP North is definitely one of the best schools in New Jersey for a reason. My school emphasizes academics, but it has been one of my goals to change that perception and allow people to see what amazing things are a byproduct of playing sports such as hard work, character, motivation, drive, the list goes on.  As far as volleyball, the volleyball program here has had several losing seasons in the past few years, and it has been my goal to rebuild our program for the future. Our volleyball team in the past was one of the best in the state, therefore, one of my main goals is to rebuild the program, and help the younger players. Recently, I just found out we are going to have a freshman team, which is a step in the right direction towards building a strong program.

Coach Luiz and Lags are great, I couldn’t ask for better coaches. They are both always positive, upbeat, and encouraging throughout the year.

Hunter Oshman from Hopewell Valley was definitely one of, if not the best player I’ve ever faced. I played Hunter at least twice a year for 2 years. He graduated in 2019, which makes playing Hopewell easier. I will miss seeing him this season, but I am glad I don’t have to be across the net from him.

We have had a district rivalry with West Windsor-Plainsboro High School South for years, and that will only continue. It’s a good competitive though because we know each other pretty well, and have played together several times during the off-season. Last year we each won once, and they have some very talented players, so it will be interesting to see who comes out on top this year.We also share a good rivalry with other teams in our conference such as Rancocas Valley, Northern Burlington, Hopewell Valley, and we look forward to a competitive match against all the teams in our conference.

I don’t have one single favorite story, but the things I enjoy the most about volleyball are tournaments such as the Moorestown Tip-off, having a competitive match with a friend and opponent across the net, energetic and lively practices where everyone is having a great time, every single win because those moments are cherished and there is usually a story behind each win.

How do you manage your time when playing a varsity sport?

It’s all about time management, especially during season. My school work and grades always come first, so I try to finish my homework as soon as I can so I can sleep early and be well rested for the next day.

Basketball, Football, Exercising / Weightlifting, and anything else that is fun.

I workout everyday after school in the school weight room. I love the atmosphere there, with a few teammates, the football guys are always there and to me, the weight room after school is the best place to be. It helps me stay in shape, as well as keep me healthy year round. I am a big believer in exercising, eating healthy, and doing whatever you can to help your athletic performance.

I practice weekly with friends at open gyms, these Sunday morning practices keep me getting better weekly.I watch old games several times in the hopes of learning new things. I enjoy looking back at things me and my team did well, and things we can improve on.

I grew up playing various sports and enjoy almost every one. I only played volleyball in high school though.

I like how NJP recognizes players that may not be in the best/top teams in the state.

Earvin Ngapeth from France because I have seen his highlights over and over again, and love his playing style. He is arguably the best player in the world for a reason, and his finesse for the game is enjoyable to watch every time.

One of my favorite teammates is Varun Nathan, my setter, and also one of my best friends. Volleyball has definitely brought us closer together and we are able to work well together on and off the court with anything.

The other teammate is Michael Massoud; he is the heart and soul of our team. Mike brings the energy and hype to practices and games. He is a huge hustle player, and never gives up, which is one of the main traits I look for in a great teammate