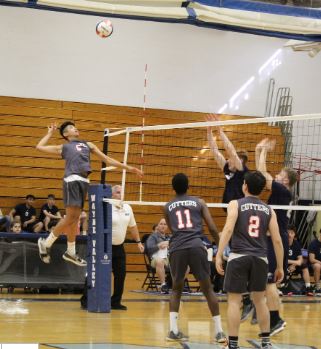 A championship team needs all of the individual pieces to come together as one unit to give it the best chance of success. The Fair Lawn Cutters of 2020 will be making a bid for their 4th State Championship season with the last one coming in 2012. And it certainly appears to have all of the tools to get the job done. Outside Hitter Jack Centeno is one of the key elements of this years squad which is just loaded with returning talent and heavy favorites to be #1 at the end of the year.

Centeno started playing as a freshman like many players in NJ, but his athleticism and speed to learn has been exceptionally high. His level of play has placed him on the Warren Sixpack 18-1 team, which distinguishes him as one of the best players in the state. The best part for Jack is that two of his Fair Lawn teammates (Mark Berry and Alex Work) are also on that club team and have the added benefit of playing high caliber opponents and raising their game even higher. And its easy to see why NJP has the Cutters as their pre-season favorite: https://njpowerranking.com/2020-boys-pre-season-reports/fair-lawn-2020-psr/

Jack finished 8th in the state in kills as a junior with 283. This is just remarkable considering their other outside Mark Berry finished third in the state with 424. This gives junior setter Gil Zyndorf many lethal options against opponents, especially with the middle presence of Dennis Narteh. Jack also contributed 170 digs and 21 aces on a team that went 36-4 and returns almost their entire starting line-up.

Jack has still not committed to a college to play volleyball but is looking at SUNY-New Paltz and Baruch currently. Recruiters… take note!

Here is our interview with Jack…

I am currently a senior at Fair Lawn High School in Fair Lawn NJ. I am a part of the class of 2020 . I enjoy hanging out with my friends and playing volleyball with my teammates in my free time.

I have been playing for 4 years, starting my freshman year at age 14.

My brother (Michael Centeno) played throughout high school and was pretty successful. I remember going to a lot of his games. The most memorable were the state games and that’s what made me want to play in high school.

After a tough loss in the state final last year, we’re looking to win it all this year and we won’t settle for anything less. Most of our roster is returning this year and the key for us to achieve our goal is for kids to step up and fill the roles of the seniors that we lost.

Coach Zisa is one of the best coaches in the state. He is able to make a lot of tough spontaneous decisions especially during games. He’s tough but he brings out the best in all of us.

We like to play as much as possible together during the offseason. Many people also do their own things whether it’s playing club or working out. The thing that makes us the most different, though, is that we’re all very good friends outside of volleyball. It makes us have better chemistry on the court.

This year, we expect our biggest rivals to be Southern, Bridgewater, St. Joes, and Old Bridge.

The toughest and most frustrating player I played last year was Old Bridge’s libero Josh Dewitt. He passed almost a perfect ball every time in addition to getting every ball up that came his way.