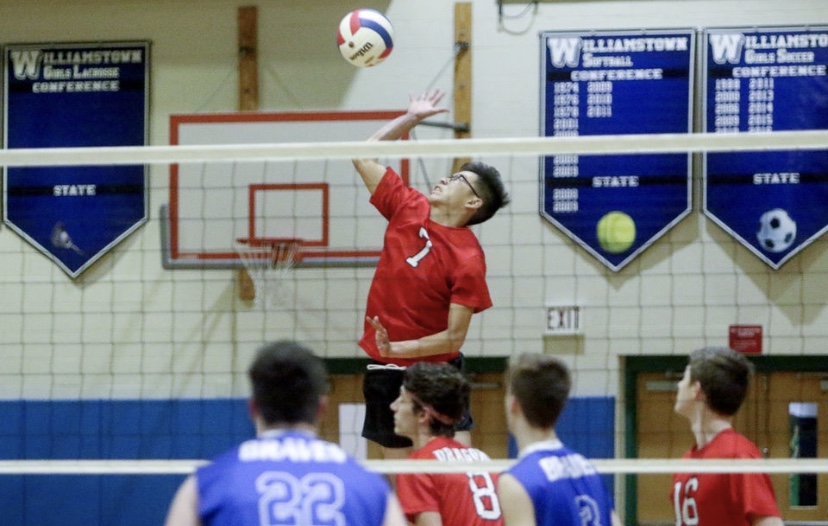 Kingsway has a rich tradition in putting out a quality volleyball program and this year should be no different. Losing six starting seniors to graduation is always difficult to navigate but five starters remain that made a significant impact as juniors.

One of those individuals is Carter Tran. Carter put up some big numbers last season with 177 kills and 39 blocks for the Dragons. This season, Kingsway will rely on him even more to be a leader and join with fellow seniors Nick Poulson (155 kills, 49 blocks) and Matt Luunsk (105 kills, 31 blocks) to lead the way.

We reached out to Kingsway Head Coach Brent Dudolik to get his views on Carter and he shared “Carter is a great kid who has worked really hard to get where he is today. I never thought that he would give up basketball to focus on volleyball in the winter but he did and it has paid off.”

Tran is playing club volleyball for SJVBC 18-1 in the off season which will pay big dividends come the high school season start. Dudolik also said “He has been a great advocate of the sport and is always looking for some gym space or beach court to play with his team mates. I had high hopes for him last year and even bigger ones this year.”

Kingsway is ranked in the top 50 and will look to improve on their 17-16 record last season. The South is always tough to reach sectionals with perennial power Southern and now greater competition from Jackson Memorial, Clearview, and others. County foes Washington Township, Gloucester Tech and Williamstown are all evenly matched and we should see some great match-ups for County honors.

Carter will play an important role in the Dragons success and based on our interactions with him, he is up for the challenge!.

Here is our interview with Carter…

Tell us a bit about yourself Carter?

I attend High School at Kingsway Regional and I am graduating year 2020. I live in a small township in East Greenwich. I currently play for SJVBC and played middle up until my junior year, switching to outside hitter.

I have been playing volleyball since my freshman year, being introduced by my current coach in High School Brent Dodulik who convinced me to play.

What initially inspired me to play volleyball is a funny story. I was playing volleyball in gym class with some volleyball players. It surprised me how much better these guys were compared to the average athlete in class. It made it obvious volleyball is more than athleticism.

I believe we have a good chance to go far in the playoffs this season, let alone in our conference. A good amount of Volleyball players are returning this season such as Nick Poulson, Elija Gatling, Max Ma and so on. The key to our success is passing and defense. Offensively I believe we have a lot of threats but if our passing is consistent, I know we will do just fine.

Kingsway’s biggest rivals are of course Clearview and Williamstown. Clearview has been a Kingsway rivals in just about every sport but the team we often have a good game with is Williamstown. I expect good competion from both schools this season.

Do you play sports other than volleyball?

For most of my life I have practice and played basketball. I never would have thought the love I have for volleyball would change my mind, but now I choose volleyball as my main sport. There is never a dull moment in the game.

My favorite teammate is my good friend Nick Poulson. Having the same story as me, he played basketball and transitioned to volleyball as well. Not only do we have this in common but he has the energy we need to win this season.