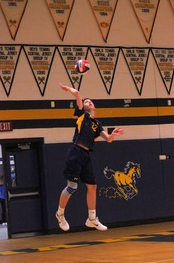 Freshman represented roughly 4% of the NJ High School Varsity Volleyball rosters in 2019. You can count one one hand the freshman that were statistically impactful for their high school team during the 2019 season. There are many great teammates in the Class of 2022, but we think of roughly five players as the cream of the crop. Chris Lynum of Livingston, Brian Mendoza of Bergen Catholic, CJ Barker of Don Bosco Prep, Matiss Bars of Pope John, and our focus for this interview Nick Brzoska of Marlboro. Brzoska had 118 kills, 8 blocks, 19 aces, and 82 digs in his freshman year for the Mustangs. Not too shabby!

Nick brings size and strength to the Mustangs attack. The 6’3″ outside is playing club for Warren Sixpack 16-1 this winter. He is a versatile and talented sophomore as evidenced by his highlight video in this article. Marlboro’s youth movement will be something to watch as the season progresses with many pieces of the future getting experience at the varsity level. There is a swagger that is evident when they talk about their chances for the upcoming season. The confidence that comes from playing at a high level during club season that is sure to carryover to high school come March.

NJP counts 4 returning varsity seniors to the squad including Logan Toran who had 174 kills last season. Marlboro will have a new setter and other young talent moving up. But Nick is the kind of player that the Mustangs will build their team around for the next three seasons. The future looks better and better for Marlboro as they build their brotherhood.

After finishing a respectable 13-9 but losing 7 senior varsity players, the Mustangs were predicted by NJP to decline. But this youth movement lead by Nick will be an interesting story line for 2020. The Central Sectional can be brutally competitive and even their Shore North Division has CBA, Howell, and Wall to contend with. But the line in the sand has been drawn and don’t be surprised to see Marlboro fighting for league honors come May.

Here is our interview with Nick…

Hi Nick…Tell us a bit about yourself?

My names is Nicholas Brzoska. I go to Marlboro High School and I am now a Sophomore. I am a 6’3 outside hitter and I play for Warren Sixpack 16-1’s.

I first started playing volleyball in 7th grade so about 3 years.

I never played a sport before and my parents wanted me to try a sport. My brother played volleyball in high school and told me that it is a really fun sport. I later tried out for the Warren Sixpack 14 age group and made the team and from that point forward I became obsessed with volleyball.

I am 6’3 and my reach is 10’3. My position is outside hitter however I’m very balanced as a player so I play different positions from time to time, and I play for Warren Sixpack.

My High School team this year is going to great. We don’t have many returning players because we lost 7 seniors however the players that are taking the seniors places have been putting in a lot of work and many of them playing at Warren Sixpack. I think a big key to our success is Dan Marino (17-2) because he will be a big block for any hitter.

Last season the toughest player I had to face was Jack Dooling because his serve receive and defense was incredible as an outside but also against us he was slamming the ball deep line causing our setter to have a difficult time getting the ball up.

I do plan on playing in college at the D1 division. Some colleges that I would love to play for are NJIT, Penn State, Loyola Chicago, and UCLA.

Our biggest rival for the upcoming year is going to be CBA for sure. They have incredible potential as a team mostly made up of juniors. Jack Dooling (17-1) is going to be a incredible hitter next year, and Colin Stevens (17-2) is an in  difficult setter to read because he makes the same movements to set a middle or a outside.

My favorite part of the NJP website is the rankings because it allows you to see how strong teams out of your division are. Also I enjoy how NJP interacts with the players and is allowing other players to see how different players get ready for games and what their plan for the future is.

My favorite pro volleyball player would most likely be Bartosz Kurek because of his ability to hit every ball possible even if it would be easier to do something else.