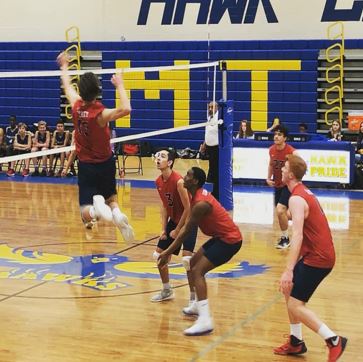 The Jackson Liberty Volleyball team received the #11 ranking in NJP’s preseason analysis. They lost 5 solid players to graduation but return 7 varsity members and almost 60% of their statistical points. One of the most important returning players for the Lions is Outside Hitter Luke Brown.

Luke’s senior year should be a blast! He tallied 234 kills as a junior with 30 aces, 34 blocks, and 110 digs. Luke will be the “go to” guy on the Lions attack and we expect him to surpass the 300 mark for kills in 2020. At just over 6 foot tall, he uses his exceptional leaping ability to pound opponents at the net.

Brown credits his involvement in volleyball to Head Coach Brian Chesley. Chesley started the Jackson Liberty program 6 years ago after graduating as a Lion in 2010. Coach used his influence to get Luke involved as a freshman and he has never looked back as he fell in love with game. Chesley has a chance this year to have his best season ever.

The Lions 15-7 record last season is expected to improve. They will battle Manchester (#12), Vianney (#16), and Donovan Catholic (#37) for league honors. The Shore overall is stacked in 2020 with Jackson Memorial and perennial powerhouse Southern ranked ahead of them and some very solid and improved squads just behind them like Wall and CBA.

Luke is a man of few words. He lets his athleticism and talent do the talking for him and from our perspective, he will be a roaring success in 2020.

Here is our interview with Luke…

I attend Jackson Liberty High School in Jackson, NJ and I graduate 2020 so I’m a senior.

I have been playing volleyball since my freshman year and I was inspired by my dad because he played volleyball and also my coach Brian Chesley.

I am 6 foo,t 155 pounds, and my highest recorded vertical was 39 inches. I am an outside for high school and for my club Warren Sixpack.

The toughest player I’ve faced last year was Alex Roschko the outside from Howell because he picked apart our defense and we couldn’t get a block.

My Mom and Dad support me at every game and also my sister.

I think in the upcoming season my team can win the division with some of our starting returning players Nic Mathias, Kellie Koroma, Keyvon Harris, Bryce Bailey and some new promising players Dollir Churyumov and Zack Rowan.

My school coach Brian Chesley is a big part of me playing volleyball because my freshman year I didn’t plan on playing. But last minute my coach got me to play and I ended up loving the sport.

My favorite pro is Taylor Sanders.