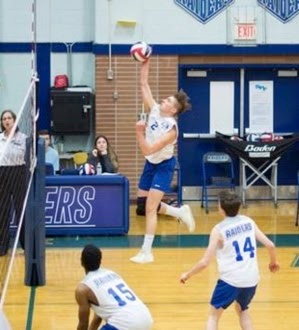 Braedon Cooke will be the only returning varsity player that is a senior at Scotch Plains Fanwood and the Raiders will need his leadership to help rebuild a team that graduated 10. But it’s not as dire as you may think.

Braedon has been playing AVVC 18-1 during the winter club season and the two returning juniors are Anthony Ngumah and Nate Sta Rosa who are high level 17 Sixpack club team players. And between Sixpack and AVVC, SPF has 12 players at the club level at various ages. And those are just the ones on our radar. So the task may not be so daunting as there will be an abundance of talent come tryout time.

SPF finished 21-5 last season and brought home a Union County Championship. They have basically lost 80% of their statistical points and 77% of their starting roster which in our NJP formula has dropped them from #20 at the end of last year to #50 in pre-season rankings. So obviously the PSR can be misleading considering how well the depth charts have been managed by the Raiders and how strong their bench of upstarts and JV players is stacked. So we totally expect them to overachieve on our pre-season projection.

Braedon was the only junior on last years varsity team and he had a solid year contributing 69 kills, 31 blocks, 143 digs and 13 aces. If he slots in as the #1 outside as decided by Coach Brock Hor come season start, we project some big number statistical improvements. And we also expect that SPF will again be in the hunt to defend their Union County title against Union or Westfield.

Here is our interview with Braedon…

Braedon…Tell us some details about you?

I currently am a senior at Scotch Plains-Fanwood High School. I live in Scotch Plains, but I am originally from Bermuda.

I technically have been playing volleyball since I was five but I didn’t start playing competitively until 7th grade. I started playing volleyball because my mom would take me to her practices, and taught me the basic skills on how to play.

I am 6ft 2inches and my vertical is about 20 inches, not really sure. I currently am playing as an outside for both my high school and club team. However, my favorite position would have to be libero.

My club coach, Jabarry Goodridge, has been such an impactful person throughout my volleyball training. Since he is a two-time all american, and was awarded a spot on the … all decades team; his volleyball IQ and experience has really helped me to grow and develop my skills. I have been so grateful to have been able to work with him as my coach.

This year for us should be interesting because we graduated 10 seniors from our varsity team, leaving only three returning members left. Out of those ten seniors 5 of them started. So our team this year is going to be made up of the three returning varsity players and most of our JV team from last year. For this season, the key to our success is going to have to be trust. Since the starting line up for our team has never really played all together before; we are going to have to build up our chemistry so that we all can trust each other to do our job on the court.

The toughest player I had to play against last season would have to be Austin Zhao from Ridge. The reason why is because he always challenged me to be defensive and he forced me to get better to play against him and his team.