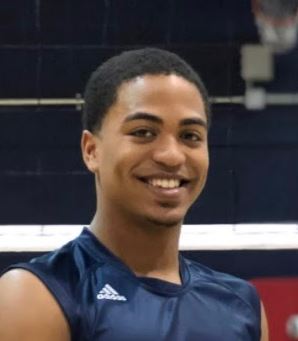 There are some players that Coaches just hate to see leave their program. It is very obvious that a special bond has been formed between Senior Fernando Parades and Passaic Varsity Head Coach Omar Munoz. It dates back to middle school days when they first met. Coach Munoz knew then he had someone special…” He was part of my middle school program since 8th grade. This kid loves this game and loves to win. In all aspects, he’s the go-to guy! His passion leads him to be a natural motivator. One of my mentors identified him as the “X factor” of the team.

Coach was not at a loss for words when describing Fernando… “Because of his love for the sport, he makes programs better. He’s the voice of the program for Passaic. With the intangibles he displays, he is just a great leader!” Parades appears to be the type of personality that puts his all into everything he does. Munoz shared ” He is an active student in the Prep Academy (majoring in Legal Studies), he participates in daily morning announcements and the student government association. He works in Barnes and Nobles café on the weekends and plays club for GSE while managing a 3.5 GPA.”

Coach Munoz also talked about Fernando’s leadership qualities. “Fernando controls the locker room. Speaks up whenever he feels like were not maximizing our strengths as a team, plays with passion. He will do whatever it takes to get the guys fired up to play BIG! Can easily take over when needed to, whether its in a timeout or during practice.”

Fernando posted 114 kills last season as well as 36 aces and 94 digs. With 7 varsity players returning, Passaic will have a solid core to lead the team in the Big North Liberty. They weigh in at #19 in NJP’s pre-season rankings and are projected to finish atop the division. There is nothing that Fernando would like better than to see his team win a county championship as a senior.

Coach finished our interview with these words… “Passaic is really lucky to have him one more year. I will truly miss him. I love this kid.”

Here is our interview with Fernando…

Hi Fernando. Tell us a bit about yourself?

I am a senior at Passaic Preparatory Academy. I live in the City of Passaic. My family consists of my father, mother, and sister.

I have been playing volleyball for 6 years since.

What initially inspired me to take on volleyball was actually my current coach. He at the time was a middle school volleyball coach and encouraged me to try out because he saw how I enjoyed playing played volleyball in gym.

I am not the average height of most outside hitters standing at 5’6 with a vertical 18’’, my club team being the Garden State Elite Volleyball club.

My support group, of course, is my parents but it goes so much further and beyond than my family. My friends who show up to every home game and cheer me on and teachers who come out to watch us play at almost every game. Along with my coaches, who not only support me on the court but off the court, to be more than just great athletes but good people.

Although there is no way to measure how well our team will do the upcoming season. We all have our minds set on winning counties and trying to make a run for the state sectionals. After being ranked #1 in our county and being upset by Wayne Valley, I know without a doubt that every single one of my teammates wants redemption. Especially the eager seniors who have come up short in the past 2 seasons to good teams, but we think this our year and last year to make a statement. Yes we do have a lot of returning seniors. Our key to success will be taking every point we can control from our side of the net and pushing ourselves to excel and play to the high level of volleyball I know we can play at.

My school, Passaic Preparatory Academy, opened up last year in my district for students who want to pursue a pathway in the arts and law fields. Our volleyball team has students from three different high schools in the district, to make up one “Passaic High School” team.

My high school coach is Omar Munoz. He has been my coach since middle school up to now, my senior year. Words cannot describe how passionate and caring he is; he always wants us to succeed in volleyball and in our lives in general. He will go out of his way to make sure we have the skills we need to succeed. My club coach is Jordan Elam. He is such a character! He is always willing to help us improve in every aspect of the game has to offer, working us hard  to improve our skills and to push us to be better athletes. He’s always motivating his players to play for every single ball and give their all every single play, no matter the score. He knows how to turn someone’s day around and knows just the right things to say to get his team playing at the level we all know we can play.

Last season, the toughest competitor that we faced was George Gonzalez from Eastside. He was attacking every single ball and not letting a single play go or giving the defense a chance to settle. During the three matches we faced against Eastside, he would come out putting balls down from every single rotation.

I do plan on playing in college. I am looking into the college of Eastern Nazarene and John Jay Criminal College, both division 3 programs.

I would say our biggest rivals would be Clifton and Wayne Valley for their competitive spirit every single time we play them.

My favorite volleyball story would be when we played Teaneck on our home court and the bleachers were full. As people had come to watch two undefeated teams face head to head. It was an amazing experience, fans contributed to the cheers and having fans brought out the very best in every single one of the player pushing us to play harder.

Tell us about your club team and how the season is going thus far.

My current is Garden State Elite Volleyball club and so far we’ve have a competitive season consistently getting better and making it further to the championship tournament after tournament. I’d say we have a growing team that is looking forward to hopefully medal tournament.

One of my other hobbies would be acting as a part of my school musical. I enjoy the feeling of being on stage and thrills it gives you as a performer.

The things I do to prepare for the upcoming seasons is try and get as many reps as I can. I also look for videos and information on how I can improve my technique whether it’s through workouts or through reps, I also do club training at GSEVC.

Although I share a special bond with every single one of my teammates, I would have to say that my favorite teammate is Ivan Ramos. Ivan is my closest friend and he is someone who has always cheered me on in my years of playing volleyball.

My favorite college men’s volleyball player is Colton Calwell because although he is not as tall as other outsides in the nations he does not let that stop him. He sure doesn’t play to the level of his height and it inspires me because it shows me that you can succeed in anything as long as you set your mind to it and put the hard work in.