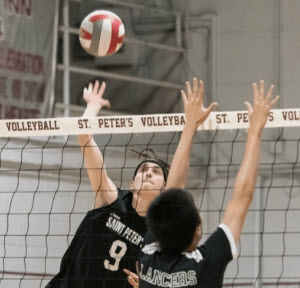 Leadership is seen in many different ways depending on who is doing the looking. Some people, depending on their personalities, are very happy letting others set the tone. And some are brazen about having to be the one in charge. When you watch Aidan Apito on the court, you just think it’s “his” team. He is the one driving the end of point huddles and giving the pats on the back to take the pressure off of a teammates mistake. Or yelling out where the opponents players are aligning to strategize his owns team response. Now as an upper classman for the upcoming high school season, St. Peter’s Prep will reap this benefit.

It’s a comfortable role for Aidan. He was Captain of the Marauder freshman soccer team. He is Co-Captain of his SideOut Sports 18-1 team despite being 17 and one of the youngest on the squad. It was clear from our interaction with him that he is a “man for others” as dictated by the Jesuit tradition his school preaches. But Aidan brings a lot to the table as an individual performer as well.

During his sophomore year, Aidan had 79 kills and 20 blocks. He started as a freshman on varsity at SPP and despite a broken finger still contributed as the starting opposite by mid-season. As a sophomore, he was voted First team All Hudson County and he continues to grow his technical skills at the club level this winter, especially on the back row (watch his recruitment video). Along with NJP 2019 All State First Team outside Chris Larkin, seniors Luke Morrison and Adrian Dookie with varsity experience, and a nice pool of juniors including Aidan, Setter Tim Jimenez, Middle Ryan Karbowniczak (teammate on Aidan’s SOS 18-1), and Six Pack 17 Pius Mwemba, the Marauders appear loaded up for a solid 2020 campaign.

SPP earned a #7 Pre-Season ranking after finishing #6 overall in 2019. They lost some key assets to graduation including starters Mason Matos (NJIT D1), libero Mike Ribeiro, and 4 year varsity players Max Honig and Garrett Gaultieri. But St. Peter’s has a ton of up and coming underclassman waiting in the wings that will contribute at the varsity level. They retain 75% of their kills and two-thirds of their blocks on this years team.

As the 6’5″ Apito continues to mature, it will be an amazing one-two punch with Chris Larkin on the attack. Don’t be surprised to see the Marauders battling for a sectional title with a possible Final 4 Tournament of Champions visit.

Here is our interview with Aidan…

Hi Aidan…Tell us a bit about yourself?

I have been playing volleyball since 7th grade.

My brother also played volleyball in middle school, which is where I was first exposed to the sport. My older brothers went to St. Peters too. In eighth grade, I went to a St. Peter’s high school match and found it amazing. The fans were crazy and it was such a great environment. I wanted to be a part of that.

My parents are definitely my biggest support group. They manage to make it to every game or tournament, no matter where it is or what their schedules are. My brother Tyler is also at most of my tournaments, and it all really means the world to me.

I believe we will have a very strong team this year. We return all of our front row players, with the exception of Mason Matos and Max Honig. The seniors last year played an important part in our team, and we are certainly going to miss all of them. However, a lot of talent is coming back, and we are all excited for the season. Our key to success is to stay determined and focused on the game at hand.

St. Peters is a college preparatory school that is very diverse. We have students and teammates that travel from all around New Jersey. It gives us a sense of Prep Pride knowing the sacrifices people make to come to this amazing school.

My high school coach is Greg Steward. Coach Greg has done a great job, especially stepping into the head coach position shortly before the season started last year. He emphasizes “No Day But Today”, and it inspires all of us to give our best effort every day in the gym.

Our biggest rivals are Bayonne, Harrison, and Kearny. We always meet them in counties and states, and it makes for a very fun game.

What do you do during the off-season to stay in shape and prepare for next year? (Club team? Workouts? Watch VB vids? Go to College games?) Do you play other sports? (if so, which ones?)

During the offseason, I have been playing club at SideOut Sports, and working out with my Prep team. I also love to watch volleyball, especially college volleyball.

My favorite part of the NJP website is the ranking system. I use it as a motivation factor to pass teams up in the rankings.

My favorite volleyball story was winning the county championship last year against Harrison. Many times through the game we found ourselves down, and we managed to pull together and close both sets. It really portrayed the hard work we put into the season, and the never give up mentality we developed throughout the year.

I plan on playing in college, however as a Junior, I would like to explore my options in the upcoming year.