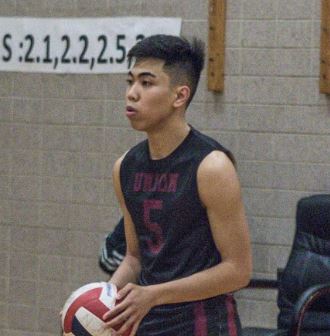 Ethan Espino may not be the tallest player on the court but his vertical makes him one of the most enjoyable players to watch in NJ high school volleyball. The Outside Hitter had an outstanding junior year for the Farmers with 114 kills, 8 blocks, and 72 digs.

The Farmers are expected again to be competing for a Union County Championship. Ethan will be a big part of the Farmers attack in 2020 along with senior setter Justin Novoa. Novoa is one of the best setters in NJ and was the only setter in 2019 to have 4 teammates with over 100 kills. They return 62% of their stats to this years squad and have been awarded a top 20 rating in the NJP preseason analysis.

Ethan has enjoyed some great coaching along the way as well as benefiting from playing club volleyball. This year he was a late addition the CJVA 18 black team and we had a chance to catch some of his matches at BANE in Pennsylvania. He is a leaper and super athletic but he also brings confidence, energy and a positive attitude to his teammates. He also had surprising hitting power for his size.

For his senior year, it will be interesting to see if Union can keep pace with their 17-4 record from last season. Three of those losses were to league rival Scotch Plains Fanwood and the other was in the State Tournament to St. Peter’s Prep which included a 34-36 first game.

Here is our interview with Ethan…

Hi Ethan… Tell us a bit about yourself?

I am a senior at Union High School and I live here in Union. I live with my parents, 2 siblings, and 2 grandparents.

I’ve been playing volleyball since my freshman year. I was introduced to volleyball as a kid but I took interest after a volleyball tournament at my middle school in 8th grade.

I am 5’6. I have a 39 inch vertical and I play outside. I played for CJVA 18 East Hanover this year but I played for the 18-2’s team at SideOut Sports last year. My favorite position is outside because I like the idea of being an all-round player.

I think my high school team will be better than last season. We have four returning starters and two players have great potential for the team this year . The 6 of us have all had experience playing with each other in the past so our team chemistry is great. Our key to success will be passing. We have some strong hitters so when we get a great pass we have a good chance of getting the point.

Colin Donahue was our toughest competitor last year. He is one of the tallest players I’ve faced and along with that he’s a good hitter and blocker. I had a hard time getting past his blocks last year.

My support group are my parents, my grandfather, and my best friend Juliana Yanto. My grandfather helped me condition a lot for sports growing up and still supports me now. Juliana has been one of my closet friends and has helped me overcome a lot of obstacles this year mentally as a player. She also has experience in volleyball as she played for the girls volleyball varsity team this year as the libero .

I’m still deciding about playing in college, but Kean and NJCU are two schools that have my interest.

Our biggest rival is SPF.

In my very first game of high school , I was subbed in as a DS.  One play, I ran up from the back row and jumped to hit it and I got the point. I noticed the coach and players from the other team were complaining and it was then that I found out I wasn’t allowed to jump in front of the ten foot line to hit. Our team still got the point though.

My favorite volleyball player is Yuji Nishida. He is somewhat undersized at 6’1 as a pro hitter but he makes up for it with his amazing vertical, skill, and athleticism. He also began playing for the Japan National Team around 18 or 19. His accomplishments as a player motivate me to do better.

My JV coach Bill Le from freshman year made a big impact on the way I am today. He’s about 5’9-5’10 and has an insane vertical. He helped me understand that being a great player is not all about height and that I could push myself to become a great undersized player like him. He also kept in contact with me and helped me even though he left my school as a coach.