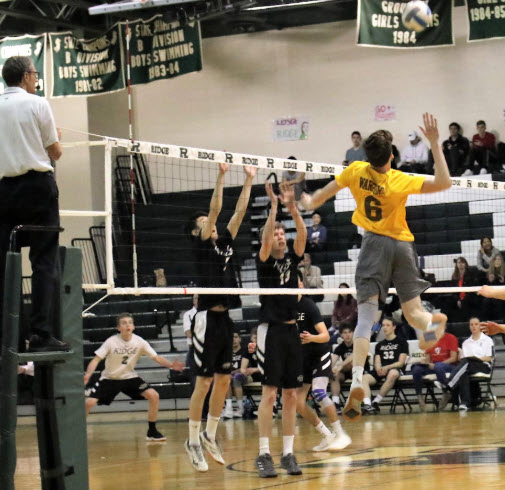 The Watchung Hills Warriors are considered a perfect storm team for the 2020 season. They have had a very young team these past two seasons and are now matured to having a group of seniors who have been through adversity and are pivoting toward success. They return 9 of 11 players, all seniors, and will be bringing forward 88% of their statistical points from last years squad. One of their top players on the attack was middle Alex Raginsky.

Alex was first team all conference in the Skyland’s last year as a junior which is a major statement considering the quality of the other teams in the division. When we get the spring season underway, don’t be surprised by the success this team sees, as they will certainly be one of our best candidates for most improved record in the state.

Here is our interview with Alex…

My name is Alex Raginsky. I live in Watchung and I am a senior at Watchung Hills Regional High School.

I started playing volleyball my freshman year in high school. Back in middle school, most of the volleyball I played was in gym class, but my gym teacher (Coach Buglovsky, who is now the freshmen coach) gave me tips that helped and inspired me to play in high school.

I am 6’2 and play middle for my high school team. I played club my sophomore year at AVVC and also played middle there.

How are you dealing with current world situation with COVID-19?

It is definitely a difficult situation that unfortunately postponed the season for now, but makes the team even more motivated to do big things this season. Safety is definitely what is most important right now and should be the number one priority.

I am definitely for the idea of shifting the season to summertime because it will give all teams an opportunity to play this season, as well as the seniors who have been waiting to play their last season.

Our past 3 seasons have definitely been leading to this year, with 9 returning seniors on the roster. If we end up having a season this year, our team has the potential to be at the top of the tough Skyland Conference and go far in the state tournament. Although the past 3 years we have struggled to win many games in the conference, this year is our breakout year to show the state how much we have progressed as a team. We have many key players that will contribute to our success this season, such as outside hitter Reecie Kirchofer, who will be playing at Ramapo College next year, setter Zach Goldring, and libero Anthony DiGeronimo. Our key to success this year will be improving our serve/receive the most we possibly can. Most of all, no matter the outcome, we win and lose as a family.

My head coach Jens Madsen definitely helped me the most in being the volleyball player I am today. My freshmen year was the first time I had played organized volleyball, and Coach Madsen taught me everything I know about the sport. He pushes the team to be the best players we can be and motivates us before every game to play the level we should be playing at. He also coaches the girls team in the fall and is the assistant coach to the Rutgers University Newark Men’s Volleyball team.

I’m not 100% committed to playing in college yet, but I am definitely looking at schools.

Ridge and Bridgewater Raritan are big rivals coming into this season.