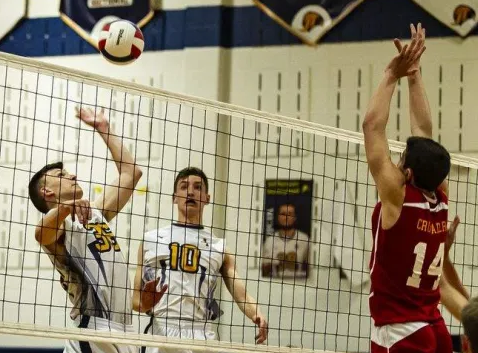 Shane Conley was one of the standout sophomores last season in the state of New Jersey. He knocked down 112 kills which was 7th overall for sophs and 153 digs which was 12th overall in NJ for underclassman. Shane’s overall play and versatility will be a major strength for the team favored to win the NorthWest.

The Falcons have 9 returning varsity players and have a balanced varsity team of all age levels and classes. They lost two high quality players with NJP 1st team All State hitter JT Wojcik and setter Logan Kandel who put almost 500 assists in 48 sets. Shane will need to step in as the offensive force for this season along with senior Sean Whalen. Senior Mark Schlomann will anchor the defense.

We expect Coach Marc Gaydos to have his team rocking and at the top of the NorthWest. We expect them to post similar numbers to last years 17-4 record. We also expect the Falcons to be in the top 40 in NJ.

From watching Shane play for the Garden State Elite 18 club team this winter, he can be dominant in games. If he can stay consistent, he can be a real force in the NorthWest as well as in sectional play in North 1.

Here is our interview with Shane…

I attend high school at Jefferson Township High School and live in Jefferson Township. I am graduating in 2021. I live with my Mom, my Dad, and my brother and I have a dog. I plan on pursuing a career in
mechanical engineering.

I have played volleyball for 3 years now. Before I heard how great of a sport volleyball was, I had already considered playing in high school because my aunt had played for Seton Hall University, which was my initial inspiration to play. Mid-season my freshman year, I was enjoying the time I spent on the court so much and my high school volleyball coach, Coach Marc Gaydos, told me I would have a future with volleyball if I focused on the sport. This gave me a lot of inspiration to keep playing and work hard.

I am 6’2”, have a standing reach of 8’1”, have a vertical of 31”, and play for Garden State Elite Volleyball Club during club season. My favorite position is right side hitter.

How are you dealing with the current world situation with COVID-19?

With all the guidelines that have to be followed, it can be hard to keep up with the sport when you don’t have your teammates to play with everyday. However COVID cannot be considered a break. I have been making sure that I do not lose my vertical jump and keeping physically active as well as exercising to improve my vertical while following the temporary rules that are put in place.

Yes, I completely support this idea. It would be great to get this season up and running again. Players build up to play in this season and they look forward to it, and for it to be taken away really stinks for a lot of players.

My high school team is going to be very successful. The Jefferson Township high school team has 6 returning players that played at Garden State Elite. We have great chemistry and we learned a lot about the sport together the last two years which can make the best of a team. The key to success this year is to give 120% of our effort and physically and mentally outwork other teams all the time. With the volleyball experience that this team has gained, the Jefferson Township high school volleyball team has the potential to have the best winning record in Jefferson history if we fight our best against all of our opponents.

Jefferson Township high school is a public school with around 970 students.

My high school coach, Coach Gaydos, played in college at Southampton College of LIU as a libero. My club coach, Coach Elam, played at Ramapo College as an outside.

Tell us about your club team and how the season is going thus far (If applicable).

My club team did very well this year. We had our ups and downs, but we ended on a very strong note. The GSEVC 18 premier team ended with a 6-2 winning record at the Mizuno Boston Volleyball Festival.

What do you do during the offseason to stay in shape and prepare for next year? (Club team? Workouts? Watch VB vids? Go to College games?) Do you play other sports? (if so, which ones?)

During the offseason, I play soccer and club volleyball. During soccer I make sure to keep up with my volleyball workouts. Then when club volleyball comes, I play three times a week and I still complete my workouts. During club season, I attend a few college games and watch a lot of college and pro volleyball on YouTube and the television.

My favorite part of the NJP website is the Tip From the Pros section.

My favorite pro volleyball player is Matthew Anderson because I learned a lot from watching him on YouTube. I aspire to be able to play just like him.