With Rutgers-Newark Coach Jack Wilson, Winning Is A Tradition 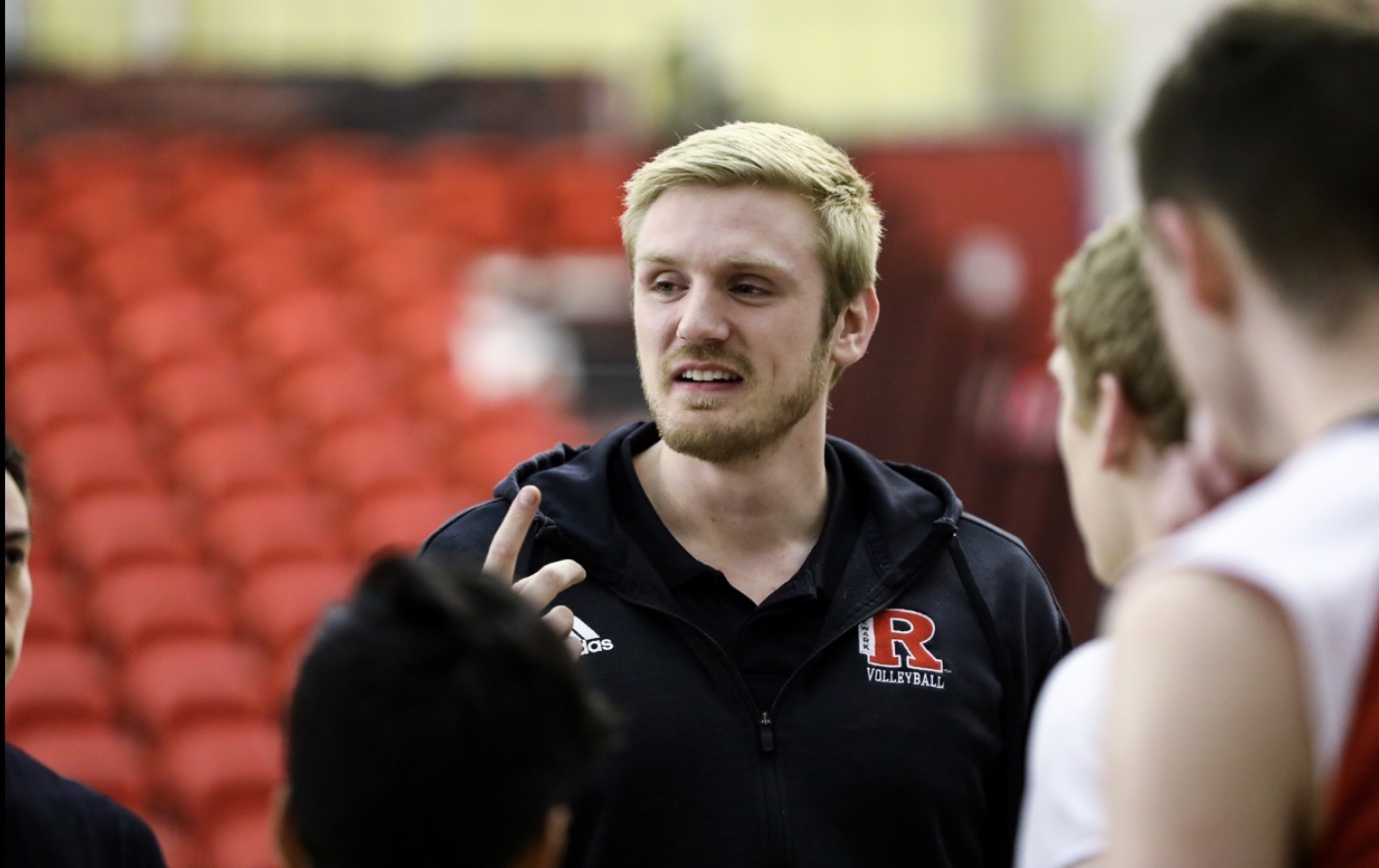 First year Rutgers Scarlet Raiders head coach Jack Wilson has had a considerable amount of success during his volleyball career. It was certainly hoped that his appointment as head coach would bring some new passion to the Rutgers Newark squad. To say the team reacted well to Jack’s leadership would be a major understatement. With a strong influx of new recruits adding to an already established group of top performers, the team put up its best season in Rutgers history, going 17-1 (the best record in the country), a #6 overall ranking, and a signature first year of what should be many years of Rutgers success.

The 2020 squad had many former NJ high school starts contribute toward the amazing season. Freshman Andrew Zaleck and Justin Tuohy, who were leaders in back to back state championships for Old Bridge the past two seasons, had award winning years. Andrew was named the NJAC Co-Player of the Year. Justin was NJAC Co-Rookie of the Year. Both Players also were named NVA/AVCA 2nd Team All Americans and Andrew was named the AVCA East Region Newcomer of the Year. Sophomore Arvind Kumar, formerly from Southern Regional High School, was brilliant all year putting up 155 kills, second only to Zaleck’s 188. The team also had outstanding contributions from former NJ players Robert Long (Ridge junior), Eric Hollenbach (Piscataway soph), Nick Arce-Cox (Bayonne Junior), Elan Dorkhman (Old Bridge soph), and Matt Nikishin (Howell soph). Coach Wilson was named NJAC Coach of the Year.

Coach Wilson had some great roots during his volleyball career. He was a two-year captain for the Cosby High School Titans in Midlothian, Virginia before playing at George Mason University for five years. Wilson was named captain for three of those seasons and helped lead the Patriots to their first Eastern Intercollegiate Volleyball Association (EIVA) Championship in 28 years. He was named EIVA 1st Team All-Conference as well as being twice named to the EIVA All-Tournament team. Wilson as also named a Volleyball Magazine All-American during his senior year with the Patriots.

For two summers Wilson trained in Anaheim, California with the USAV Volleyball squad. He played professionally for Kokkolan Tiikerit in Kokkola, Finland for one season. Wilson’s professional career was unfortunately cut short due to an injury so he decided to pursue coaching. He became an assistant coach for Eastern Mennonite while also coaching the Richmond Volleyball Club in 2018 and a Division I assistant coach for New Jersey Institute of Technology in 2019 before taking on the Head Coach title for the Scarlet Raiders.

We list at the end of this article, the accolades that Jack received throughout his career. But none of them were more important than being AVCA East Region Coach of the Year in his first year as Head Coach at Rutgers in 2020.

Here is our interview with Coach Jack Wilson…

Tell us a bit about yourself? What college did you attend, family?, former high school and club team?, experience, etc…

I am the youngest of 4 and the only boy. I grew up watching two of my older sisters play volleyball. I started playing at Richmond Volleyball Club and I went to Cosby High School and Midlothian High School. In College I played for George Mason University as an Outside for my first 3 years and a Rightside my last two. I then played for a short period in Finland for the Kokkolan Tiikerit. From there I was the assistant at Eastern Mennonite University, then NJIT before I was able to take on the role as head coach for the Scarlet Raiders.

What motivated you to become a college volleyball coach?

Volleyball has taught me so much in my life about teamwork, hard work, discipline, and leadership. These qualities exist in the game naturally, but can really be magnified if taught and supported. I wanted to be a part of teaching the game that has given me so many opportunities in my life and I hope to pass along those life skills to my players.

With regards to the technical aspect of the game, I would just tell them to play as much as they can whenever they can. Play 6s if you can get enough people, play triples, play beach during the summer, pepper in the backyard if that is all you can do. They will naturally learn how to control the ball better.

With regards to the mental aspect of there game, I would recommend that they learn from their errors and then move on. Mistakes happen all of the time in volleyball, but make sure that they happen because of a physical error (not quite contacting the ball correctly) and not because of a mental error (not focusing on the right techniques).

With regards to recruitment: With the number of schools with mens volleyball now, if you want to play in college there is most likely an opportunity for you somewhere. Reach out to every school you might want to play for. Make a good highlight tape and have full match film available.

Tell us about your college team this year?

My team was hungry to improve all year long. They are all working on the court to better themselves and their teammates every day, while at the same time succeeding in the classroom to get a great Rutgers Degree.

Our season was going very well, but sadly due to the current outbreak it was cut short. I do not want to speculate on where we would have finished but I liked our chances against anyone in the CVC and in the Country.

Keep things simple. When there is a lot of extra movement in your technique it become less repeatable. When your movement is simple it is a lot easier to figure out why the ball moved the way it did after your contact and what you need to fix for next time.

I believe to motivate someone you need to figure out what they truly want to accomplish. Once they have that figured out it becomes easy for them to understand whether or not what they are doing is pushing them toward reaching their goals.

Also, great athletes are naturally motivated by competition. So we have time to work on skills every day, but most of our drills are competitive and have some type or score attached to them.

Whatever level you are competing at and whatever level you wish to compete at improvements take time and lot of repetition. Don’t get discouraged if results don’t happen instantly, stay motivated. Keep working and stay focused.

I would highlight the two coaches I had in college, Fred Chao and Jay Hosack. However, I am thankful for every single teammate and coach I have had throughout my entire career. They all contributed to my experiences and knowledge of the game.

What else should prospective players and parents know about Rutgers?

I would encourage everyone to come check out Rutgers-Newark and its campus. It is a great school to get a top notch Rutgers Degree while competing at a high level on the volleyball court.

2017: Played in all 27 of Mason’s matches for team-high 95 sets…led the Patriots in five offensive categories – kills (331 – third in EIVA), kills per set (3.48 – third in EIVA), attempts (717), service aces (31) (0.33 per set – fifth in EIVA), and points (390.5) – in his farewell season…hit 0.243 over the course of the season and contributed seven assists as well. Wilson, one of the team’s captains, made an impact in defense as well, tallying 70 digs – fourth-most on the team – and 49 blocks (0.52 per set), including eight solo stuffs. The redshirt senior was one of Mason’s two players to earn weekly recognition from the EIVA, earning the Offensive Player of the Week twice and was Mason’s only representative on the 2017 First Team All-EIVA. He had 21 double-digit performances in attack – six-straight between Jan. 7 and Jan. 26 and eight-straight between March 24 and April 15 – and two 20+-kill performances…season-high 22 kills against Princeton (April 8)…had season-high five aces against nationally ranked Cal State Northridge (March 11) in the Active Ankle Classic…picked up two four-block performances, both on the road – at Limestone (Jan. 7) and at Charleston (W.V.) (Jan. 12).

2016: Appeared in 73 sets and led the team in kills with 267…Led the team with a 3.66 kills per set average…Finished the season with 59 digs, 20 blocks, 17 aces and seven assists…Had seven matches of 20+ kills…Recorded 20 kills and three digs against IPFW (1/29)…Posted season-high 29 kills to go along with five digs and four block assists against Ball State (1/30)…Served up five aces at Penn State (2/27) while also recording two block assists…Made 27 kills, four digs and three block assists at NJIT (3/4)…Posted a season-best eight digs against UC Irvine (3/22)…Had 26 kills, four digs, two aces and two block assists against Penn State (4/16)…Helped lead Mason to an EIVA Championship with 22 kills versus Saint Francis (4/23) in the championship match…Wrapped up the season with 18 kills, six digs, one ace and one block against Ohio State (5/3) in the NCAA Tournament.

2013: Redshirted first season with the Patriots.

High School: Four-year letterwinner at Cosby … named to the Top 30 Underclassmen to Watch and USA Volleyball High Performance Continental Team as a junior … also named to the 2012 Volleyball Magazine Fab 50 list as a senior.