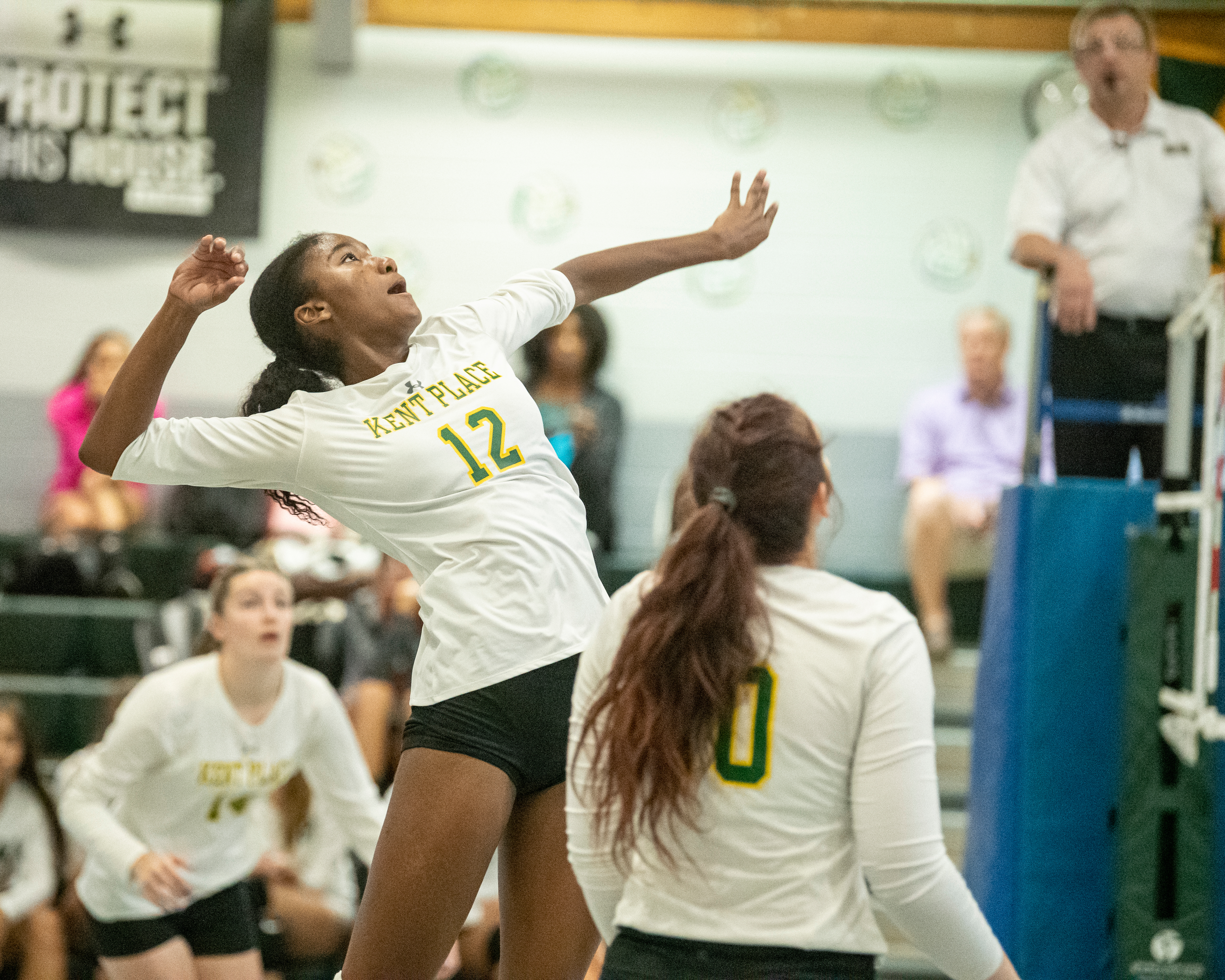 Kent Place had an amazing 2019 volleyball campaign posting a 22-2 record, taking home a Prep School Championship, and possibly most importantly saw the emergence of some young players who will lead the Dragons future. One of those players is Iman Handy. As a sophomore, Iman posted 171 kills, 23 blocks, 22 aces, and 154 digs, numbers that a senior would be very proud to contribute to their team.

Iman is a sleek player with outstanding mobility for her near 6′ frame. She balances a calm presence and confidence before each point with a world of exuberance and passion after each point. She has the talent and leadership skills to drive her team to success every time she is on the court, whether for her high school team at Kent Place or her Club team VB Rags. Along with fellow sophomore Sabrina Skyers, the Dragons will have a ton of offensive production for the next two years.

NJP has the Dragons as a Top 10 rated NJ high school team in their 2020 pre-season ranking analysis (coming soon). We have high expectations for this youthful crew to have continued success. When you consider their only two losses last season were to Union Catholic and Immaculate Heart and they were able to stay close to both of those top teams in their matches by equal scores (25-19, 25-18), NJP had Kent Place’s 2019 final computer ranking at #7 overall in the state despite their #9 seed in the Non-Public Group sectional and not being included in the NJ.com top 20.

As you will soon tell, Iman is a bright and articulate young lady with her gifted volleyball skills being just one of an artillery of talents. We know the best is yet to come from this rising junior, both athletically and academically. The next two years should be a great ride.

Here is our interview with Ms. Handy…

Hi Iman… Tell us a bit about yourself?

I go to Kent Place School in Summit, NJ, and I live in Livingston with my mom, dad, and thirteen year-old brother Miles. I am in the graduating class of 2022, so I will be a junior this fall.

I have been playing volleyball for about five years now. I have two godsisters that both played volleyball before I did and exposed me to the game, so I decided to take up volleyball and found a real passion for it that I did not find in other sports I had tried. My parents have always wanted both me and my brother to play lots of sports for the life lessons they teach (my brother Miles is becoming an elite baseball player and also plays basketball and lacrosse). Tennis was actually my first sport, which I played for about three years. Though my passion was not as strong, tennis greatly helped with the hand-eye coordination and serving form that I use in volleyball!

I am 5’11” with a 28-inch vertical (I can reach 9’11”). I am a six-rotation outside hitter, both for high school and my club, VB Rags Volleyball Academy. I started as a right side and then played middle for two years, and though those helped me develop my attack arsenal, I can safely say outside is definitely my favorite position. I love the versatility that comes with being an outside hitter; you can hit a shoot, go, four, two-ball, tandem, rip, hit right-side for one ball and transition to the left pin – and then you go to the back row for serving and digging!

How are you and your family dealing with current world situation with COVID-19? Are you expecting a normal Fall high school season schedule?

My family and I are doing pretty well during this COVID-19 era. While being cooped up in the house most of the time can be a little boring, we are all getting along and finding new hobbies to take up (my personal favorites are baking, paint-by-numbers, and ping pong!!). As for high school season, I highly doubt the fall season schedule will be normal, but I do have high hopes that we will start playing, or at least practicing!

I think my team is going to be great this upcoming season! While we lost four starting seniors, we have returning players who are finally going to get to show off their talent. I hear we are moving up from the Mountain Division to the Watchung Division, which is huge for us. The key to success in my eyes is going to be lots of practice and team chemistry as we face newer and better competition. I have full faith in us, though, and can’t wait to build on last year’s momentum!

Assuming that all of last year’s varsity players return to play in the fall, we will have a lot of seniors (at least seven), a strong junior class and a few younger players who could make an impact.  Fellow junior, Sabrina Skyers, and I should be a high-scoring duo.  Our new libero and my fellow co-captain, Aya Mtume, is one of our most consistent servers, and I am excited to play with her and see her on the floor more this year. Our other co-captain and middle hitter, Elizabeth Miller, is amazingly hardworking, and I  expect her to be a standout, as well.  And we have an incoming freshman, Lauren Osuala, who will DEFINITELY be someone to watch.  I have seen her in club, and she has so much passion and talent that will take her far in the sport if she wants it.

I would say Alex Kwasnik, former senior middle from Union Catholic, was our toughest competitor last season. She used to play at my club, so I knew how great of a player she was before playing her both in a high school preseason scrimmage and in the semifinals of the Union County Tournament, but her arm swing is so fast that by the time the ball is set, it has already hit the ground!

My high school coach for this fall will be Reynaldo Ferreira. I love his focused-and-passionate coaching style, and I can tell he knows a lot about the game. He has helped me a lot throughout my past two years at Kent Place; whether it’s explaining how to be in the best position to dig a ball, or spending Halloween evening with me working on my right-side hitting, Coach Rey has definitely been a huge help. My club coach, Carlos “Carly” Rivera, has been my longest volleyball supporter (aside from my parents, of course) and I cannot thank him enough for the energy he has put towards my development. He’s definitely the best teacher of the game, and has created a welcoming-but-dedicated club culture where players can learn in a nurturing, family environment. He has watched me grow since I was a skinny ten-year-old, and I can happily say I am so content with where I am now because of him.

For personal awards, last season I was selected for the All-Non-Public Second Team, as well as the UCC All Conference Team, both of which were huge honors as a sophomore.

As a team, last season we were the State Prep Champions and the UCC Mountain Division Champions, which I am very proud we accomplished for Kent Place!

My college choice will be driven by the highest academic environment I can find, but I hope that school is also a place where I can play volleyball. One of the unfortunate things about this COVID-19 pandemic is that I was not able to attend any college camps this summer. Last year I went to Duke and Wake Forest and found camps to be a great way of learning about the schools, so I hope to visit more soon!

While this may be “basic”, Kathryn Plummer is definitely my favorite college/pro player. My club had an endorsement deal with her, which involved her coming to one of our club practices to talk to us about her journey as one of the top players in the country. I loved her “give me the ball, I’m going to close this game” mindset, as well as her dedication and love for the game. Not only is she a leader, but she’s also a kindhearted and genuine person, too!

My club coach entirely shaped my volleyball experience. I have only ever played for VB Rags, so I do have a close connection with the club director, Carlos “Carly” Rivera. Walking in at ten years-old and as skinny and frail as a stick, Coach Carly really invested in me. He has developed me into a great player, and I am eternally grateful for his patience, understanding, and guidance throughout my volleyball career. He is a master at teaching the techniques as well as the IQ of the game, and I’ve learned so much.

What do you care about outside of volleyball?

I love understanding the psychology of people and why people do what they do and how they engage with others. Some of that seems really important in the times we are in now, but I am generally curious about why people buy the things we do, why we choose the friends we choose, what makes people happy about themselves — cool stuff like that. It is fascinating to me all of the things that make up things we simply call “influencers” or “mentors” or “friend groups.” I guess you could summarize it as social and behavioral psychology. I think this interest is derived from my compassion for others and desire to understand the tendencies and lifestyles of other people, which leads me to my other passion of serving the community and seeing the impact of service firsthand!