Barnegat’s Veronica Tikhomirova At The Top Of Her Game 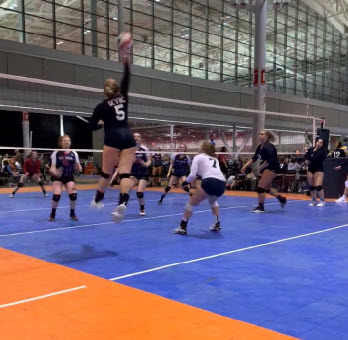 The Barnegat Bengals looked as if it was going to be a very tough year after starting the season 7-10. On October 14th, they played their arch rivals from Pineland and jumped out to 25-19 first set win. But in the next two sets, Pinelands took control winning in a three set thriller.

Something sparked for the Bengals after that night. We think they decided they were just no going to loss the rest of the year. The looked to their go-to player to lead the way and Veronica Tikhomirova took over. In the next 5 weeks, Barnegat had 8 matches. Veronica posted 72 kills, 3 blocks, 45 digs, and 21 aces to help fire the Bengals to eight straight wins. Their state playoff run fell short against Demarest (21-5) in the Group 2 semi-final. Demarest went on to beat Rutherford (31-2) for the Group 2 State Championship. It was a great run as all the Bengals came together to knock off some solid teams including a huge upset in the first round of Ramsey (20-4).

Veronica was just outstanding during the season posting over 200 kills, 186 digs, and 43 aces as a junior. She expects that Barnegat will be very solid in 2020 for her senior year returning almost all of their starters. This youthful squad is looking to improve on last years run and could end up being a force at the Shore.

Veronica plays year round, at high school, club, and at the beach. She is your classic hard worker, putting everything into her game and making her teammates better every time she takes the court. Veronica has a power swing that can overwhelm opponents. A year older, we could see some major records getting smashed come season end.

Here is our interview with Ms. Tikhomirova…

Hi Veronica… Tell us a bit about yourself? Hello my name is Veronica Tikhomirova and I live in Barnegat. I go to Barnegat High School where I am going to be a senior this year. I have been a varsity starter for 3 years now and this will be my fourth year. I will be graduating in 2021. I live with my Mom, Dad, 2 Sisters, Grandma, and 2 dogs. My Sisters are 13 and 5.

How long have you played volleyball and what inspired you to take up volleyball initially? I have been playing volleyball since the 7th grade. Since I was 5, I always thought I would be playing soccer the rest of my life but, in 4th grade, I fractured my leg and ended up cheering until the 8th grade. I was the only person in my school history to be allowed to play 2 sports in the same season. I knew cheer was not the sport for me so when I started playing volleyball in 7th grade I knew that I would be playing it all the way throughout high school and in college. My best friend Morgan, who also plays for Barnegat, told me to try the middle school camp and that is when I fell in love with the sport. Freshman year was when I started to take volleyball seriously and played for the school, club, and beach team. Everyone always asks me why I am such a good passer and that is thanks to Coach Brandy Binkley. She taught me how to pass when I was on her 15 national team and she just drilled it into my head every practice and it has made me such a better player.

What are your metrics/details? Height, vertical, position, club team, etc. What’s your favorite position to play? I am 5’7, my vertical is 9ft, and I am a 6 rotation outside hitter. I also in the past played right side, libero, defensive specialist, and middle. My favorite position to play is no doubt outside. You get to do every aspect of the game, serve, serve recieve, pass, hit, block, and set. I have played for Ocean County Volleyball Club on the national teams for the past 3 years. Last year my club coaches Coach JP and Coach Jose made a huge impact on my game and were always supportive of me.

How will your high school team do in the upcoming season? Do you have a lot of returning players? What will be the key to success? I expect our team to be very successful this season. We went on a run last season in the state tournament and this year our plan is to do even more and we are hungry to win the state championship since we just fell short of it last year. But that starts with trying to win B South and Shore Conference first. All of our starting returning players are coming back except Gilana Fitzmaurice which is very unfortunate. Gilana and I have been playing together since 7th grade and now we don’t have that chance anymore. We were the power duo and I am truly going to miss playing with her. We were destined to win B South last year and possibly Shore Conference but Gilana got hurt in the first week of the season and we did not get her back until the state tournament. Even though she’s a middle and I am an outside, we were opposite each other because Coach Jennings always wanted one of us in the front row. Everyone is hoping to get back on the court soon and practice hard. The key to success is staying focused and not letting nerves get the best of you.

Tell us about your teammates. Who do you expect will be this year’s standout and up and coming players? Most of our team have been playing together since middle school so we have a very close bond. We fight like a family but at the end of the day we put aside all our differences when it is time to step out on that court. Patria Moreno was a key player last year as she set the ball anywhere you wanted it and will continue to be our setter this year. And without her, I would not be anywhere near almost getting 500 kills this upcoming season or potentially breaking the all time career kills record. Nina Soberano, Morgan Giaccone, and Julianna Padilla will take care of the back row this season. With Valencia Gosser’s vertical, I think she will be a huge part of our offense this year. As well as Avery Ocone and Gianna Gerkins who are all up and coming sophomores.

Beach or hard court? Beach or hard court is a hard question because even though they are both volleyball they are played very differently. I play for Stars and Stripes Beach Volleyball Club. In beach you have to be way more smart in where you place the ball and you are in every single play since there are only 2 people. In indoor you hit a lot more and there are 5 other people to rely on other than the one other person you are playing with. My favorite part from beach is using all the cool shots from there, indoors, and people just can not tell where you are going to hit the ball. So in my opinion if I had the chance I would play both beach and indoor in college.

Have you won any awards such as All County or All State or others? Freshmen year: varsity letter.   Sophomore year: MVP, captain on court Junior year: MVP, best defensive player, all star in Moorestown tournament, broke the record for most kills in a single game (22), all division B South, second team all-shore, captain on court, and first group all state group 2, also captain for my club team.

Which schools are your biggest rivals? I think our biggest rival by far is Pinelands in any sport. It does not matter which sport is playing Pinelands, we have been rivals for years and that will not change. We try to get as many people to the games even if it’s away because it is honestly just such a fun environment to root on your team against your rival.

What do you do during the off season to stay in shape and prepare for next year? (Club team? Workouts? Watch VB vids? Go to College games?) Do you play other sports? (if so, which ones?) There honestly is no off season for me. As soon as school season ended I started right away with club and beach. As well as trying to get to the gym at least 6 days a week even after a 3 hour practice in the gym or on the sand. During this winter I have played in beach tournaments in Clear Water and Pompano Beach. Also doing coaches clinics while being there. Then right after club season ends in mid May, beach is still going all the way through the beginning of September and school starts in the fall. So in my case I really have no off season.

Is there a teacher or coach who really helped you along the way? My high school Coach Karla Jennings saw potential in me the moment I stepped onto the court my freshmen year. She has always encouraged me to be my best and always told me how proud of me she was this season and everything I had accomplished. We have a special bond that I will forever cherish. Without her I would not be the player I am today. Unfortunately, I did not get to have a full season with my club Coach Dan Williams. In the short time we were together he has taught me a lot and pushed all of us to our limits. Hopefully we get to finish out the season at Beachfest in Maryland.

We are tied at 14-14. https://www.instagram.com/p/CVeSk2yseId/?utm_medium=twitter

Vianney takes set 2. Going to deciding third set now for all the marbles…