Crusader Ella Kretten is a Vision of Senior Strength 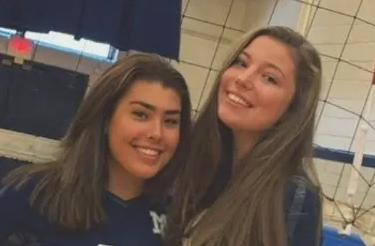 As Ella Kretten enters her senior year, she has a clear vision for her future. She is planning her academics first as she looks toward college with her ambition of becoming a nurse. Of course if volleyball can align with that choice, all the better. She was an athlete when she entered Morris Catholic but had never played volleyball before her freshman year. She picked up the game quickly and is an outstanding player for the Crusaders and for her club team at GSE.

With the recent news of the season start being pushed back a month, most seniors are fearing the same consequences of the cancellation of the boys spring volleyball season in March when COVID first reared it’s ugly presence in our area. Ella, like most seniors, is really looking forward to the Fall season, especially with Morris Catholic having a very strong team coming together. As we all know, life is not fair at times, but hopefully the girls can have some piece of a season to cherish their teammates and play the game that they love.

Ella has been amazing offensively at both club and high school teams. In 2019 as a junior, she put down 211 kills and with her 5’10” athletic frame, was a real force on the attack. Without the season being cutting short, this could have been a year with 300+ kills on a team rated as #33 in the state out of over 300 teams. We expected the Crusaders to be right there in the Big North Freedom with perennial favorites Northern Highlands and Old Tappan.

Whether on the court playing volleyball or pursuing her career goals, we get the sense that Ella will be making a big impact on the world. We wish her the best in achieving all her goals and commend her on her choice to care for others as a profession.

Here is our interview with Ms. Kretten…

Hi Ella… Tell us a bit about yourself?

My name is Ella Kretten and I am an incoming senior at Morris Catholic High School in Denville, NJ. My graduating year is 2021. I have been a two-year varsity starter for my school’s volleyball team. My family consists of my mother, father, my older and younger sister and my dog.

I am 5’10, I have a vertical of 9’3” and I am an all-around outside hitter but can play as a defensive specialist as well. I play for Garden State Elite Volleyball Club on the 17 Premier team. My favorite position to play is outside hitter because it allows me to involve nearly every single aspect of a volleyball game. I can pass, hit, serve, etc. It also allows me to push myself to achieve consistency in these important skills.

After a 5-8 start, Morris Catholic turned their season around finishing 15-12 and getting a state playoff first round victory. What fueled the change?

The thing that fueled the change was the entire team’s change in focus. In the beginning, we were a bit lackadaisical when practicing and not extremely focused but we, as a team, soon realized that we could be great if we put in the effort and focus during practices. Once we did our whole team’s demeanor changed, we still had large amounts of fun but we also knew when it was time to focus and work hard. I believe that fueled the change for our season and helped us get to the second round of states.

What are your personal goals for 2020?

My personal goals for me this year in the 2020 season is to be a leader on and off the court and to give my all to my team this season. It’s my last year playing for this team and I want it to be the best one yet. I want to be able to end the season with a smile on my face knowing that I gave it my all and put everything onto the court.

My teammates are spectacular. They know when’s the right time to be serious but also when to have fun. They all have the ability to help the team win in times of struggles and help others grow in the sport. They are the most supportive teammates in the world and they are like a huge family to me. They celebrate whenever someone gets a record high number of kills, digs, or assists and makes the whole arena know what just happened. I expect that one of my middles, Maia McNeil will stand out this year, she is a high-jumping athlete with such determination which makes me believe she will be a force to reckon with in the middle. In addition, I believe that my setter Riley O’Hagan will stand out this year as well. She is overall an outstanding volleyball player, last year she led our team in assists with 429 assists. Not only does she have fantastic sets but her energy and attitude on and off the court are amazing and really allows the team to flourish.

I do want to play volleyball in college but only if it works with my major. I want to become a nurse and that has changed the schools I am looking at for volleyball. I am currently looking at Gettysburg, Muhlenberg, Boston College, Skidmore, University of Pittsburgh, etc.

Ashley Verma. She was a 2020 graduate at Kinnelon High School and was their libero. She was one of my biggest competitors last year because she had so many outstanding digs against me when I played. She dug most of my crosscourt hits forcing me to change my location and take more line shots. She is an amazing libero and forced me to adapt making her one of my toughest competitors last season.

Tell us about your club coach…

Khaled El Shamey is my club coach and is one of the best that I have ever had. I have only had him for a single season but he has impacted my volleyball skills immensely. Not only has he improved my skills but he cares about the team so much and it shows. He makes an effort to come to every game whenever my teammates play against each other. Before I came to his team, my setter, Riley O’Hagan, was on his team last year and introduced me to him and GSEVC. Even when I was not on his team, he still coached me and showed me support which allowed me to flourish under his coaching ability this past club season.

My support group is my family, which consists of my Mom, my Dad and my two sisters. They have always supported me with everything that I do and have shown me immense amounts of support with volleyball. They cheer me on during my high school games and always cheer me on when I’m away at club tournaments. They have helped me become the confident player that I am today on and off the court.

My favorite college player is Kathryn Plummer. She was a senior for Stanford Volleyball and led them to 3 national championships in 4 years. She is my favorite player because of the way she portrays herself on the court. She has immense amounts of composure on the court and that is something I admire her about. She gets thrown many out of system balls and instead of getting flustered she handles them with calmness and composure, which is something that I strive to do on the court.

The volleyball work never really stops because I continue to play right out of the school season with my club team. When that ends, I continue to harness my control with skills at home and continue to workout and stay in shape for the beginning of school preseason. I also watch a lot of college volleyball to see how they play and how I can incorporate some of their skills into my own volleyball skills.

Is there a teacher or a coach who really helped you along the way?

My high school coach, Coach Corey Meyer, has really helped me along the way. Although I have only had him for my junior season he has helped me become the leader and player that I am today. He is a kind and outgoing coach and has created a good relationship with the entire team aiding our season. He constantly is pushing us to be our best while also keeping it fun and creative. I am excited for my senior season with him because I know he will do anything to help this team go farther than we have before.