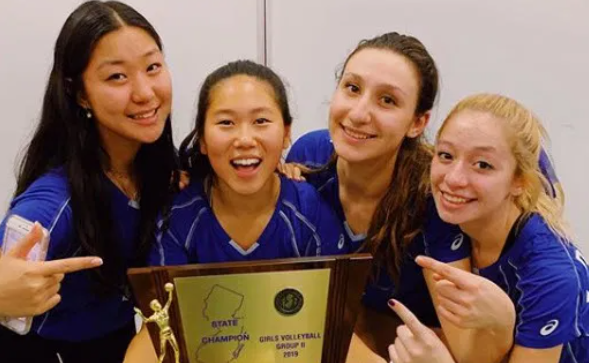 In 2018, the Demarest Norsemen volleyball squad took a senior laden team into the state tournament and had high expectations of success. They had been to the Group 2 championship game two of the past three years and knew they had a good shot to upend Rutherford in the finals. They proved they were the best team in Group 2 in 2018 winning a state championship that eluded them the past five seasons and finishing 21-5. As they looked ahead to 2019, they knew it would be a major challenge as they lost almost their entire starting varsity team (7 players) to graduation.

In 2019, they would need many of their young talent to step up to avoid a potential disastrous season. One of those players stepping up was Noa Shuminer. Noa was a needed ingredient on the attack for the Norsemen. She lead the team in kills and along with sophomores Nicki Woods and Gretchen Haray, accounted for 80% of the attack points for the season. Noa put down almost 200 kills as a junior and also contributed 256 digs to a team defense that tallied almost 1,500 for the season. After starting the season 6-3, they won 15 of their next 16 games ending the season with another Group 2 back to back championship and matching the 21-5 record from 2018.

For 2020, they return almost all of their starters, and will feel a different pressure than the underdog role in 2019. Demarest slots in as #4 in New Jersey in the NJP pre-season ranking.

We expect Noa will slot in as a six rotation outside hitter in 2020. She has a strong stroke and gets a ton of force on her hits whether she is in the front row or back. She has excellent instincts and isn’t afraid to read defenses and drop in some tips to get points. She is also an outstanding defensive player with a lethal combination of accelerating quickness and soft passing hands.

The short campaign due to COVID should work to the Norsemen’s advantage as we expect them to string wins together early and often as a leader in the Big North.

Here is our interview with Ms. Shuminer…

Tell us a bit about yourself, Noa?

I attend Northern Valley Regional High School Demarest. I live in Closter. I am graduating in 2021.

Tell us about your family?

I am the youngest of three kids. I have an older brother who is 27. He graduated from Rutgers and also attended NVD. I have an older sister who is 24. She just graduated from the College of Charleston and she also attended NVD. My Mom and Dad are huge supporters of my volleyball career and come to every game. They love watching me and my team play and I couldn’t ask for better mentors and supporters in my life.

I have been playing volleyball since sixth grade. I was also playing soccer and tennis at the time and did not know my love for volleyball would grow this much. I tried out in sixth grade because my sister played when she was younger and I thought the sport looked fun. Entering high school, I had to choose from the three sports I played because they were all in the fall, so I chose volleyball and never regretted my decision.

I am 5’7 and an outside hitter. I played for Cut Shot Volleyball Club. Outside hitter has always been my favorite position because it includes playing front row and back row.

You lose only three seniors but one was one of the top defensive players in the state in Madison DeMartini. Can the Norsemen repeat last year’s success in the upcoming season?

Madison Demartini was an amazing player and leader, however I truly believe that the talent remaining on our team is more than capable of repeating last year’s success. We learned so much from her on and off the court and we will carry that into the next season.

Tell us about your Demarest teammates. Who do you expect will be this year’s standout and up and coming players?

Our team as a whole is very versatile. Gretchen Haray is an incoming junior and she started as our middle last season. She has an amazing vertical and strong angle swings. Not only is she an amazing player, but she is one of the most supportive girls to keep the team’s energy high and alive. Another player who I believe is going to be a stand out player is Olivia Cammalleri. She was the starting setter and made the entire team better. She is one of the most hardworking girls and can play in any position.

NJP considers you as one of the top players in the state. Do you plan on playing in College?(If so, which ones are you looking at?)

It has always been a goal of mine to play in college. My parents love the idea because they know how much I have invested in the sport and it is such a huge part of my life. A school that I have wanted to look into is The University of Tampa. I love the city and the campus. A reach school for me to play at is College of Charleston. It is my dream school to play at and the campus itself is somewhere I see myself in the future.

Jenna Rogers was an amazing volleyball player and athlete. She was the top player for Rutherford. She was one of the biggest offensive threats on her team, let alone in Bergen County. Playing against her was a challenge and every time we played her we got better.

Tell us about your run to the Group 2 State Championship in 2019?

At the start of our season everyone underestimated us since we lost so many starting players. That was a big role in our season because it motivated us to prove everyone wrong. We started the season with almost a completely new lineup with new girls who have never even played at the varsity level.  We thought we were entering a rebuilding year, but with a lot of blood, sweat, and tears we made it through and won a championship. That feeling was amazing and something I will never forget.

Tell us about your club experience and your Club Coach?

My club experience is something that keeps me active in the sport and makes me love the sport even more. I started playing club in eighth grade for cut shot. I switched into Pinnacle my freshman year and from then on have been playing for Cut Shot. I love the girls and the coaches. One coach that I feel impacted me is Coach Ashley Cornett. During my Sophomore year Club season, I feel like I blossomed into a consistent hitter.

My support group is my Mom and Dad. They are always there for me and motivate me to get better. My teammates from Demarest volleyball make me better everyday and support me in any possible way. Our friendships and our bonds would not be as strong as it is without our love for the sport. My entire friend group in high school is what it is because of volleyball and I would not be who I am today without it. Lastly, the entire volleyball coaching staff are so supportive on and off the court. Coach Beth Powell is someone I feel like I can go to for anything without any hesitation. The entire volleyball program makes you feel so welcomed and like your family, I wouldn’t trade it for the world.

What is your favorite inspirational video that you like to watch before games?

I do not have an inspirational video to watch before a game but our entire team sings a song together in the corner of the gym every home game while the other team is warming up. This song is called I Believe Yolanda Adams, this song is so motivating and inspiring and has a warm spot in everyone’s heart.

Our biggest rivals are Riverdell and Rutherford. Every game against them is crazy and always close. We get better every single time we play them.