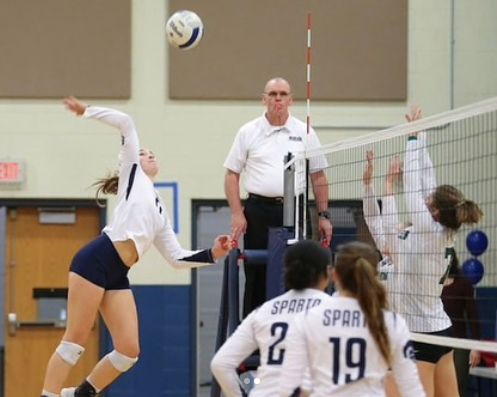 Sparta High School had struggled in the 2018 season, finishing 9-17 overall. However, 2019 was a drastically improved year for the program. MacKenzie Wiggins, an outside hitter, moved from Corpus Christi, TX to Sparta, NJ and made an instant impact. After not qualifying for the postseason in 2018, Sparta made it all the way to the NJSIAA Group 2 Semifinals, only to be defeated by Rutherford. If the 2019 season was any indication, Sparta could be in for an exciting season, with Wiggins returning for her Senior campaign.

Texas is a hotbed for national volleyball talent and it showed with MacKenzie’s transition to NJ. Kenzie just got better and better as the year went on. Her numbers were simply outstanding with over 400 kills, over 250 digs and 66 aces. She was fifth in NJ in kills and was fifth in the state in both the NJP Overall player rater and the NJP Attack rating. She has clearly identified herself as one of the best players in New Jersey and has the ability to be a major force come county tournament and playoff time. She makes the players around her better and Sparta has earned a pre-season #26 ranking overall in the state.

MacKenzie aspires to enter the sports medical field and hopes to help other athletes who sustain sports-related injuries. Having dealt with her own challenges in the past, it brought her perspective and appreciation for dealing with sports injuries first hand.

We expect to see Kenz battling for player of the year honors with Simrin Carlsen (JP Stevens) and Lauren Wilcock (Mendham).

Here is our interview with Ms. Wiggins…

Tell us a bit about yourself, Kenzie?

My name is Kenzie Wiggins I live in Sparta, New Jersey and I will be a senior at Sparta High School graduating in 2021. I moved to Sparta from Corpus Christi, Texas the summer of 2019. I was born in Tampa, Florida and moved to Texas when I was 10. Volleyball has help created friendships and memories among three different states that I am extremely grateful for. My older brother, mom and dad are my biggest supporters and I could not have been the athlete I am today without them.

My favorite position to play is outside for sure, I love being able to do a little bit of everything.

How will your Sparta high school team do in the upcoming season? Do you have a lot of returning players? What will be the key to success?

I am super excited to get on the court this season! I have high hopes and think we have potential for sure. We have about half the team returning and a lot of young talent! The key to success is sticking together and trusting those around them.

Tell us about your Sparta teammates. Who do you expect will be this year’s standout and up and coming players?

Everyone at Sparta is very hardworking, and overall good athletes. As a team I think each person that steps on the court has the ability to make a difference in at least one aspect.

I do plan on playing in college and I am extremely excited about it! I am in contact with some division 1 and division 2 schools and will hopefully be able to make a decision soon so stay tuned!

Which team last season was the toughest competitor that you faced and why?

Mendham high school was definitely one of my favorite teams to play and a great competitor! They’ve got an amazing well rounded team with some great defensive and offensive players.

You lead the Spartans with over 400 kills, 257 digs, and 66 aces as a junior last season and finished 5th in NJ and 2nd in your junior class in kills… what are your personal goals for 2020?

I would love to push myself to get some great numbers although numbers aren’t everying. My personal goals this season are to improve my footwork, serve receive and placement while attacking.

You had 6 matches last season with over 20 kills. Do you feel pressure to be the “go-to” person on the attack?

Tell us about your high school coach Derek Hall?

I am super grateful for Coach Hall! He was extremely welcoming to me and super encouraging. He is always pushing us to become the best version of ourselves on and off the court. He has helped me become the athlete that I am today without a doubt. Moving midway through high school is definitely not the easiest thing but him and everyone on the team were all so kind and made me feel comfortable at Sparta immediately.

Tell us about your club experience at Allegro and your Club Coach?

The coaches and players at Allegro were equally as welcoming to me as at Sparta. They immediately included me and became my favorite people to be around. I always looked forward to practice and seeing all of them. We started off with a great season and sadly had to end early.

Which do you prefer… Beach or Hard Court?

Definitely indoor! I love playing any type of volleyball at any time, although there’s something about a good chaotic rally with 12 people on a court that is just exhilarating to me. A good rally is such an adrenaline rush and as fun as beach is I just only feel it when I am playing indoor.

My first two years of high school were in Texas, and here are some awards I won there:

This past season at Sparta here are the awards I won:

I want to go into a sports medicine pathway and I have a little background story to it! February of 2019 I tore 3 ligaments in my left ankle while playing volleyball. I was out for four months and spent a lot of time in and out of the doctor, trainers office and physical therapy. While talking to all of those people, I really enjoyed what they had to say about their career path. I always knew that I’ve wanted to do something with medicine and the thought of being able to help young athletes is something that I would love to do.