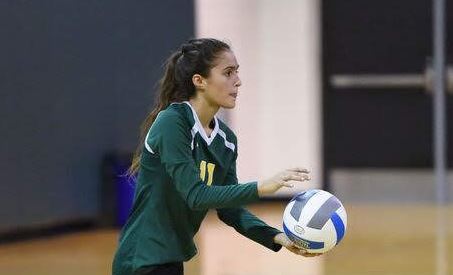 When Laurel Sarkaria burst on to the scene as a freshman setter for JP Stevens in 2018, she made a clear statement that she was capable to contribute toward a GMC title and maybe even a state championship for the Hawks during her high school career. She took over as the Hawks setter about half a dozen games in to her first season and has never looked back accumulating over 1,000 assists already through her sophomore year. Her ability to quarterback the offensive strategy and make her teammates even better is evident. And JP Stevens certainly has had the offensive talent to compliment her strengths.

During her freshman year, the rookie setter lead her team into a GMC championship game against South Brunswick. The tough spot for the freshman turned into a spirited victory for the Hawks with Laurel tallying 21 assists, 3 aces and 8 digs in a 25-19, 25-23 victory. JP Stevens finished their season at 17-6 and made it to the state sectional quarterfinals. They won 12 of 13 games games leading up to their state tournament loss with the only loss coming to Colonia, the undefeated first place team in the GMC.

Last season, Laurel’s sophomore year, was truly special. JP started the season 26-0, won another GMC championship, beating league foe Colonia in the finals, and were primed for a state tourney warm-up game against a dominant Union Catholic team whose only loss was to #1 Immaculate Heart. The Hawks felt defeat for the first team in a tight two set match and lost a bit of momentum as they entered the tourney. They again fell in the quarter-final round, this time to East Brunswick, finishing the season at 28-2.

With Laurel as setter, the Hawks have accumulated a 42-5 record. She finished third in the state of NJ in assists and was tops in her sophomore class. Despite her smaller frame at 5’4″, she plays much bigger and finds ways to strategically dismantle her opponents. The Hawks will once again be stacked on the attack for 2020-21 season with All-World Outside hitter Simrin Carlsen leading the way. Simrin, who will be entering her senior year, already has 833 kills in her career in addition to 591 digs and over 100 aces. Simrin is one of nine returning varsity players from last years squad.

Under normal circumstances, and with the synergy that Laurel and Simrin have established this past two years, we would have projected just monster numbers statistically for both players. With a COVID shortened season, numbers will be diminished, but we expect this pair to lead the Hawks to another season of excellence. They are ranked #10 in the NJP preseason rankings and are rated the best team in the GMC.

Here is our interview with Ms. Sarkarian…

Hi Laurel, tell us a bit about yourself?

This upcoming school year, I’m going to be a junior at JP Stevens and I currently live in Edison, New Jersey. I’ll be graduating in 2022. I have an older sister who just graduated high school and a younger brother who’s about to enter his final year of middle school. I live with both siblings, my parents, and my grandparents. We also have three dogs (meaning I constantly find chewed up volleyballs).

I’ve been playing volleyball since I was in sixth grade and I’ve loved it ever since. I was inspired to start playing by one of my friends who wanted to sign up for a summer camp in the area. After the camp, I continued on and played club all through middle school at CJHeat, but switched to Atlantic Volleyball in high school. Although I do still run track for JP, even though I would much rather be on the court than on a track.

Unfortunately, I am only 5’4”. For both high school and club (last season I played at AVVC), my favorite position to play is setter. I play all around in school and for the majority of my club season. Setting has always come easiest to me and it’s the only position I really see myself playing. However, I do enjoy digging backrow as well.

How will your JP Stevens high school team do in the upcoming season? Do you have a lot of returning players? What will be the key to success?

In the upcoming season, I’m expecting big things from JP. Our past two seasons were phenomenal and I hope things only get better from here! Although our starting libero, one of our starting outsides, and our right side graduated last year, we do have some key returning players. Once we reestablish a team dynamic and really work on playing together as a unit, I think our team can be just as strong (if not stronger) than past years.

Tell us about your Hawks teammates. Who do you expect will be this year’s standout and up and coming players?

There are definitely a good amount of players that I can expect to stand out this year. Incoming seniors Christian Chen and Alexis Jorji (both middles) have showcased immense potential in past seasons. Their skill levels skyrocketed towards the end of last year and will only continue to rise. In addition to those two, I would be keeping an eye on outside, Joyce Chen as well. She did an amazing job stepping up last year after Irene Quan suffered from an injury. I played club with Joyce and watched as her arm swing and vertical strengthened.

Playing in college has only recently become a topic of discussion in my life. I only really ever played for fun, but this year things may change and I am always open to the idea of taking the sport to the next level if I succeed in finding somewhere that appears to be the right fit for me.

Tell us about your club experience at Atlantic Valley?

I loved playing at AVVC this past season! It was a completely different environment than that at CJHeat. I had a great coach (Greg Chiang) and I was able to perfect a lot of different skills as well as learn new drills. The club has a very open atmosphere and it’s easy to ask questions and build relationships with your coaches. The different drills that were implemented also helped to push me to be my best.

You have made a huge impact on your Hawks team as setter with almost 1,100 assists in your first two years. What are your personal goals for 2020?

In 2020, I hope to continue to garner more assists and hopefully break 2,000 at the conclusion of my senior year. Overall, I just want to improve personally and work to create a strong dynamic on my team as a whole. I’m not sure how the season is going to work this year, but usually I would also be hoping for a GMC title for the third year in a row!

Tell us about your relationship with outside Simrin Carlsen on and off the court.

Simrin has been such a great mentor since the moment I met her. Not only is she an amazing volleyball player, but she was one of the best captains I have ever had. On the court she is a true leader, something that’s pretty clear to anyone who has seen her play. She’s always looking to help everyone out and I’m so grateful to have been able to play on the same team as her. Off the court, we became good friends last season and she’s one of the sweetest people I have ever met!

I run winter and spring track for my high school during the offseason, in addition to playing club volleyball. I’ve been running track for a good part of my life and I love it almost as much as volleyball. It helps me stay totally in shape and allows me to work different muscles.

My support group is definitely my family. My mom tries to come to as many games as she can and is always there with a hug at the end. My grandparents have also made appearances and it makes me extremely happy to see them smile after I touch the ball. My family has been by my side throughout the entirety of my volleyball career and I wouldn’t want it any other way.

My family and I are working as best as we can during this pandemic. We’ve spent a lot of time together, taken a lot of walks, and busted out old board games on the weekends. Unfortunately, this year’s season has been moved to February. I can only hope that myself, along with my teammates, find somewhere to practice and stay in shape in the meantime.

One of my favorite volleyball stories happened last season right before my team played Colonia. I was warming up with one of my teammates and I was smacked right in my face with her phone as she reached to play some music. I ended up chipping one of my front teeth, but was still able to play one of the best games of my life! It was a bit embarrassing, but made for a great story, after I got the tooth fixed of course.

This past season I was super lucky to be picked for the All Conference first team and All Red Division first team. I was extremely excited and grateful for the recognition. Our team also won the Red Division title as well as the Conference championship for the second year in a row!