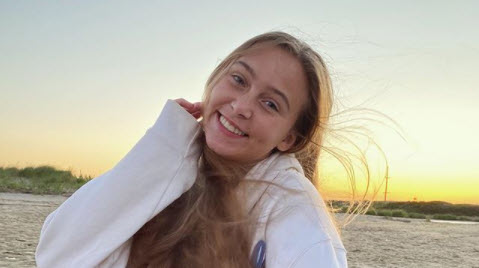 Morristown High School has had a tough go of it for the past couple of seasons. After finishing 5-15 last year, the Colonials will look to outside hitter Brooke Atkins to up big in her third season on the Varsity squad in Morristown, as a Junior.

“My name is Brooke Atkins and I am a six-rotation outside hitter for Morristown High School. I live in Morris Township and play for Allegro Volleyball Club,” Atkins said, “I am currently in my Junior year of high school and graduate in the year 2022, hoping to eventually move on to the collegiate level to advance my volleyball career. Family is very important to me and I also spend a majority of my free time with them and they never fail to put a smile on my face.”

Playing volleyball came as an idea from one of her grandfather’s clients, “My grandpa owns a plumbing and heating company and he was working at a neighbor’s house when she [neighbor] said ‘Brooke is pretty tall, she should play volleyball!’ My grandpa came home with the idea and I loved it, since then I have played for 5 years and have been in love with the sport,” Brooke Atkins said.

Atkins stands 5’10” but has an impressive vertical touch of 9’5”, to which she added, “I am hoping to improve on that tremendously this year with Junior year being the most crucial for recruiting. My favorite position to play is definitely outside considering I am able to display all of my attributes.”

Brooke Atkins also noted that there are a handful of returning players who will be Juniors and Seniors. “I have a lot of hope for this upcoming season and I think myself and the girls on the team all improved,” Atkins continued, “The key to success this year will definitely be to run our offense quick, play good defense, and serve tough.”

Morristown’s program definitely has some important role players to assist Brooke Atkins. Atkins said, “This year’s standout players will be myself, including Saskia Bozard Fowlin and Sydney Rossiter. We all have been starters for Allegro’s National teams for 3 years and compete in the GEVA Power League,” she added, “I feel this makes us stand out because we have been able to build our relationships with very strong foundations from attending the same school and playing on the same travel team for so long.” Atkins also mentioned that playing in the GEVA Power League has “better equipped us for the High School season,” she noted.

Saskia Bozard Fowlin will likely be the starting libero, while Rossiter will presumably get the lion’s share of the setting opportunities. Brooke Atkins will start outside and this makes the Morristown hitters more comfortable, being able to put all the passing, setting, and hitting pieces together.

Atkins has been impressive from the get-go, and the outside hitter intends to play in college.

“I definitely do plan on playing in college, it has always been a big goal of mine since I was in middle school watching the big games on TV,” Brooke Atkins said. She is currently speaking to multiple D-I programs all over the East coast.

Last season did not yield the results that the Morristown Colonials had expected, and according to Brooke Atkins, “Last season the toughest team we played was definitely Mendham. They had a good defense and ran an even better offense. All of their passes were to target, and ran things quick out to the pins, which is something I hope myself and my teammates can accomplish this year at Morristown.”

Atkins has been named an Honorable Mention for the NJAC All-Conference team in the past and she looks forward to working very hard to add more accolades to her list.

Brooke finished with a very impressive stat line at the conclusion of her Sophomore campaign, leading her team in kills (116) along with tallying 73 digs at the outside hitter position.

“For this upcoming 2020 season, I hope to improve and get stronger overall. I believe that the skill will come as long as you put the work in and utilize your time effectively in the weight room and get as many reps in as possible in the gym,” Atkins said.

But does Brooke Atkins feel pressure that she may need to be the ‘go-to’ player for Morristown?

Brooke mentioned, “I absolutely feel no pressure and love to be that “go-to” person for our team. My favorite moments during those close games are the last few points and the feeling of excitement and accomplishment I get when I am able to put the ball down when my team needs it most, is the best feeling in the world.”

The outside hitter, now a Junior at Morristown, had some very positive remarks about her MHS volleyball coach.

“Rita Costigan is the Morristown High School girls volleyball coach and played volleyball at the collegiate level at Manhattan college and coached at NYU,” Atkins added, “Coach Rita has been helping me tremendously through my volleyball career. She is a very hardcore coach that likes to push her athletes with her end goal making her players good people and athletes on and off the court.”

Brooke Atkins plays club volleyball at Allegro, and she has loved every bit of it since the start.

“Playing volleyball at Allegro has honestly been one of the best experiences in my life. I remember when it was my first placement camp ever and the first time I’ve ever touched a volleyball outside of gym class, I was terrified,” Atkins continued, “Shortly after the placements, our teams were put together and I began to learn the fundamentals of volleyball. Since then I have been pretty successful at Allegro continuing to play on their 14, 15, 16, and 17 National teams with the same group of girls. I definitely want to thank my coach Alan Masone for most of my successes in my volleyball career thus far. He continues to push me every practice and put in countless hours to help me advance and better my skills and attitude towards the game.”

Atkins mentioned that she even remember my outfit exactly of her first time playing volleyball: a New York Giants exercise t-shirt, black gym shorts, no-show socks, and black Nike sneakers…to which she joked by saying, “You will never see me in that outfit today.”

Brooke has not gone at volleyball alone, mentioning, “My family is definitely my biggest support group both when I am on the court and at home. My grandparents (Terry Sr. and Sandy), father (Terry Jr.), and all three of my sisters (Gwen, Brynn, and Hailey) attend all of my games and have yet to miss one. They are always willing to change their schedules around just so they can come and watch me play and I thank them all every day for the opportunities and support they have given me throughout my life.”

During the break in volleyball action as a result of the COVID-19 pandemic, Atkins has mainly focused on staying in shape and working on her vertical and speed. She added, “My sisters and I also played some two-on-two games on our backyard net. Our high school tryouts got pushed back to February and that is all we know so far. I do not think this setback will affect our team because we are such a determined group of girls and we all want to do better this season so I have hope that we all will stay committed to the team and do things to stay in shape for the upcoming season.”