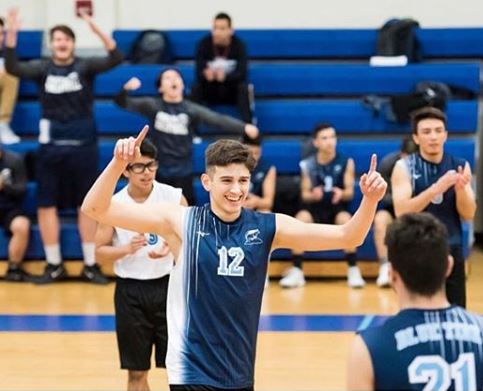 Kevin Molina has made the transition from New Jersey high school volleyball star to Kean University student athlete quite seamlessly. Molina was a major asset for the Blue Tide smashing over 500 kills in his three years at varsity with almost 150 blocks. He also slammed 75 aces during his tenure with 31 in his senior year. Harrison racked up 62 wins over his playing period including a Hudson County championship.

College can be a daunting decision for many high school players who want to take the next step. For the boys, less than 5% of senior varsity players will go on to play college volleyball. Just 1% will play at the D1 level. So it is a major accomplishment to be part of the elite club that represents NJ after high school graduation. Every player who is considering playing volleyball at the next level is encouraged to visit the many options and find the school that is the right fit for you. Kevin has gone through this decision process as a junior and senior, and it’s clear he has made the right choice at Kean. It’s also interesting that many players decide to stay at home for their college volleyball and academics as New Jersey offers 9 opportunities (2 D1, 7 D3) with the addition of Drew University for 2022. Over 50% of the players stepping up end up on NJ college teams.

Kean University has an outstanding D3 program for volleyball. In it’s 10 year history, they have won 246 and lost 92 with a .727 winning percentage and are always near the top of the best Division lll teams in the country. Many of its prior stars are playing professionally or coaching in NJ such as Bez Arslani, Steve Vahalla, Christian Portera, Ed Jedziniak and Ron Dunn. For Kevin, he joined the team at an interesting time. For those of you not aware, current senior Steve Zarzycki was diagnosed with cancer in his junior year and several team members opted out of playing so they can encourage and support Steve, and play their senior year together. So 2020-21 will be an emotional time for the Cougars who are also balancing the COVID pandemic situation which will certainly continue to effect the entire college volleyball landscape.

Kevin was an impact freshman for the Cougars. He appeared in 37 sets and 15 matches, starting 5 times. He had 45 kills, 5 blocks, 42 digs and 11 aces as an outside hitter. He was revving up near the season cancellation times after posting 10 kills against Marymount and 9 kills and 7 digs against Immaculata on 2/29/20, one week before the world changed. Kean should have another top notch squad for 20-21 and Kevin and his NJ teammates Leonel Maizonet (Bayonne), Andrew Lukasiuk (BR), and David Jones (Rancocas Valley) will be making steady contributions on a well balanced and deep team.

Here is our interview with Kevin…

Tell us a bit about yourself, Kevin?

I live in Harrison New Jersey, and I attend Kean University. I plan to graduate in the spring of 2023 with a B.S. in supply chain management. My only family here In Jersey are my parents, and my one older brother. In high school I also played basketball for three years and was in the drama club for all four years.

I have been playing volleyball since my 7th grade year back in middle school. I originally started to play volleyball when one of my former teammates (Sandro Barrantes) told me to try out since he already played in 6th grade.

I am 6’1 and I used to play middle in high school, but I played outside for my second club team and currently in college. I used to play at Sideout Sports my junior year and ended up playing at Central Jersey Volleyball Academy (CJVA) my senior year. My favorite position to play is outside, despite my success at middle for Harrison.

Tell us about your Kean University teammates. Who do you expect will be this year’s standout and up and coming players?

My teammates are amazing, those guys are like my brothers. Each and every one of them bring something to the table and that it was makes them so special. We are all so close with each other which is something that is important in any team sport. For this year standout’s, I cannot really choose one; but I expect it to be one or if not all of our returning seniors.

You had an outstanding high school career at Harrison. As a senior, you had almost 250 kills, 55 blocks, and 31 aces. What was your best memory of your HS career?

My best memory of my high school career was definitely when we beat one of our rivals (Saint Peter’s Prep) in the state tournament my sophomore year after being the lower seed and not winning any of the two encounters we had with them all season long. I also really enjoyed going to the tournaments in Rhode Island that we got invited to in my sophomore and senior year.

Tell us about the contrast between your high school Coach Nick Landy and your University coach Charlie Ginex.

Coach Ginex and Coach Landy are both great coaches and have helped me become a better player overall. They both have different styles of coaching and that is something that I enjoy. They do share a similarity of being very statistical and analytical of each and every game which translates back to what we have to work on in practice.

What advice do you have for NJ High School volleyball players who aspire to play in college?

The only advice I have to give is that if you really want to play in college, you should always be playing in the offseason and against people who are better than yourself.

What was the biggest challenge in transitioning from high school volleyball to college volleyball?

The biggest challenge was probably the mindset difference, especially since college volleyball is taken more serious and requires the player to really be passionate about what they are doing in order to succeed and stay motivated.

Kean University has an amazing volleyball story with many players opting out of their volleyball year and waiting to play this year when Steve Zarzycki returns from his battle with cancer. Can you update us on this great story?

So, all four of our seniors that opted out will be returning to play for their last year together. I only met Steve last year, but he is a good guy with a strong heart that I know will do great things this season after overcoming such a horrible disease that many people could not have handled it as well as he did.

Have you formed any new friendships with your teammates?

The majority of my teammates are not even from New Jersey and come from various places around the country like New York, Pennsylvania, Wisconsin, Missouri, Virginia, etc. So it is nice to have met all these guys and really get to know how people from different parts of the country are as well as the local guys who I might have never met before either.

Which D3 college team was the toughest that you faced as a freshman and why?

The toughest team we faced my freshmen year was probably Benedictine because of their high level of play and also it was our first game of the season and did not quite yet have all the chemistry we needed to win.

How are you and your family dealing with current world situation with COVID-19? How did the shortening of the college season effect your team?

My family and I are fine, we have had a couple of family members/family friends pass away in the midst of all this; but in the end it is a very critical situation that we are all in and must keep moving forward. My team and I were very disappointed, especially since we were 4-1 in the last stretch of games before the season got canceled. Everything kind of got canceled and postponed; but we had hope for a little until we finally got the major decision which was for the best. It was very out of nowhere and It was a weird situation to go through. In the end we got through it and It was definitely a once in a lifetime experience.

Some hobbies of mine include watching UFC, practicing MMA, playing video games, playing ping pong, and just spending time with my loved ones.

One of the best coaches in New Jersey and my own mentor/teacher of the sport is Coach Anthony Sabia. I owe all my success and skills to this man who really helped me develop into the player and person I am today. Without him coaching me all throughout high school, I don’t know if I would be in the position I am right now. He is also a great mathematician, teacher, and friend.