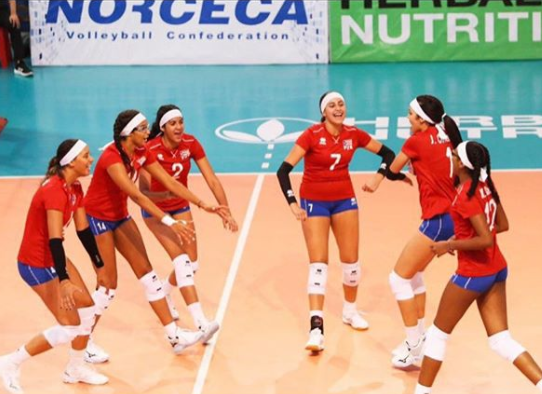 Senior Middle and Outside Hitter Cristal Paulino was kind enough to spend some time with NJP this week to talk about her experience playing volleyball at Hudson Catholic. The Hawks had an outstanding year once again in 2019-20 finishing at 29-8 and continuing their tradition of being the best girls high school volleyball team in Hudson County. Cristal will be stepping up this year as a senior to be the teams leader now that outstanding players like Makila Billingsly (357 kills, 32 blocks, 125 digs), Esther Dogbe (191 kills, 67 blocks) and Lauryn Hansford (849 assists, 82 aces) have moved on to graduation.

Like many of the Hudson Catholic gals, Cristal makes her club home at SureShots VBC. Her club experience, abroad tournaments, and her time thus far at HC has given her the exposure to many college coaches and recruiters. She announced this week that she has committed to play D1 college volleyball at St. Frances College in Brooklyn which seems like a great for her. Typically, New Jersey student athletes contribute about a dozen D1 commits per year, so Cristal is on sacred ground considering there are over 4,000 New Jersey high school girls playing volleyball with about 40% of those being seniors.

Cristal has had the golden opportunity to see the world through volleyball. Her participation in the Pan American 18U and 20U teams and the 18U World Campionship tournaments provides quite a differentiation form her fellow high school players in New Jersey. Playing in Peru, Mexico, and Egypt against some of the top players from across the globe at that age level has really raised her game. These International experiences not only raise the caliber of your play but also help build maturity and confidence, and provide life experiences that can be so beneficial for post high school education and her life after college.

Paulino is 6′ tall and has an approach jump of just under 10 feet. She is an outstanding blocker and gets a ton of power behind her hits. She has some “snap” in her delivery that puts the ball down quickly with force as evidenced by the following clip…

Cristal lives with her Dad Gregorio and Mom Raquel in Jersey City. Her 6’4″ brother Greg is also an athlete, playing baseball for the Hawks as a senior last year. The fireballing right handed pitcher has graduated and moved on to Barton College in North Carolina.

Despite losing substantial firepower to graduation, Hudson Catholic comes in at #21 in NJ in our preseason projection. The next closest Hudson County team is Union City at #56. The Hawks should be a dominant team as usual and Cristal agrees. She offered “Last year, we had some very young players in our rotation and I think the experience they gained will really pay off this year. Players like Drew Leonardis , Rachel Hennessy and Genesis Colon should be primed for bigger roles this year. I think this year’s squad is going to be very competitive.”

The Hawks continually have a talented group to take over and rise up each year and Cristal will be the only returning varsity junior from last year. But don’t let that dim your expectations from this years team. Underclassman have made amazing contributions and will be given the chance to have break out seasons. Drew Leonardis, a freshman in 2019-20, lead the team in digs with a whopping 330 and slammed 53 aces and 40 kills as well. Genesis Colon is another player to watch, a rising junior who did a great job on the back row posting 139 digs and 32 aces.

As a junior, Cristal posted 175 kills, 113 digs and 29 aces. We asked her about her personal goals for the 2021 spring season… “For my senior year, I would like to be more of a leader and a great example to my younger teammates. I personally would like to develop my skills as an all around player and develop and become more consistent with my passing and defense.”

Last season, Hudson was eliminated in the State playoff quarterfinals by the Dwight Englewood Bulldogs, who they had lost to earlier in the season, powered by 16 kills from Audrey Leak who moved on to Yale this Fall. According to Cristal “Audrey Leak from DE was my toughest competitor last year. She has the ability to score in so many different ways.”

But her best memories from last year was bringing a fifth consecutive Hudson County title to the Hawks trophy case. Cristal and the entire HC team take counties very seriously and put an extremely high level of importance on achieving this goal anuually. Personally, Paulino took home some individual hardware as well. “I was First Team All-County and First Team All-Tournament in the Rhody Classic tournament in Providence, Rhode Island.

One of the distinguishing events from last year’s journey was heading to Arizona as a team to play some talented teams from the West Coast. Over a long weekend the first week in October, the Lady Hawks went 4-3 against three teams from California, three teams from Arizona, and a team from Utah. These included nationally ranked teams such as Seton Catholic. “The Arizona tournament was one of my best volleyball career experiences. We got to play with some of the best programs. Every team was an outstanding competitor. To compete at that level was a great experience.”

Is there a teacher or coach who really helped you along the way? “Yes, Head Coach Fernando Colon my high school coach helped me develop my skills as an outside hitter and pushes me to work hard and never give up.”

Volleyball will open many doors that can provide her access to pursue her career goals. We asked Cristal about her career goals. “I plan to become a dentist, have a career in dentistry and a major in biology.” Cristal has an incredibly bright future and we wish her well.