Our Kickoff Tournament in a COVID World 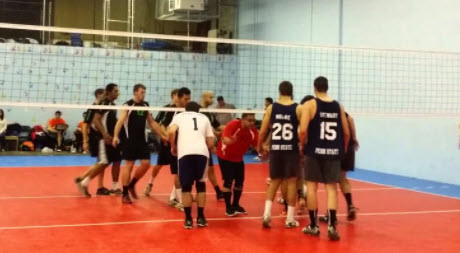 I am excited to announce that for the first time in over seven months, volleyball is back! And no, I am not talking about those zoom workouts, or outdoor practices, or bumping a ball against your living room wall. Although those activities helped us enhance our volleyball skills, there is nothing like getting back on the court with your team.

In these unprecedented times, no one knew when we would get back onto court. This pandemic threw a wrench in all our plans, including canceling our high school season, canceling nationals, and delaying the start of our club season. But finally, on October 31st, we got a taste or normalcy.

Side Out Sports was gracious enough to host a tournament for teams in the 17- and 18-year-old age group. I attended the 18u tournament with my Warren Sixpack 17-1 team. Six teams entered and were immediately temperature checked at the door.  There were signs along the walls, informing teams where to put their belongings so that they were socially distance from others.  Masks were optional, but I kept mine on, as well as most other players. No spectators were allowed in the facility.  Spectators being absent only encouraged benches to be louder as they cheered on their teammates.  It might have been a tad too quiet at times, but when you are focused on the game, you usually tune out the crowd noise anyway.

At the end of the day, my Warren Sixpack 17-1’s came out on top.  After dropping two out of three to CJVA in the first match, we roared back taking two out of three from LIVBC.  Securing the second seed, we rolled the table from there, defeating SOS in the semis and then LIVBC in the championship.

Overall, I would say that this tournament was a success.  Not only did my team win, but it was run in a professional manner and followed all guidelines.  I hope this is the first of many tournaments this season, as all of us in the volleyball community cannot wait to get back onto the court.