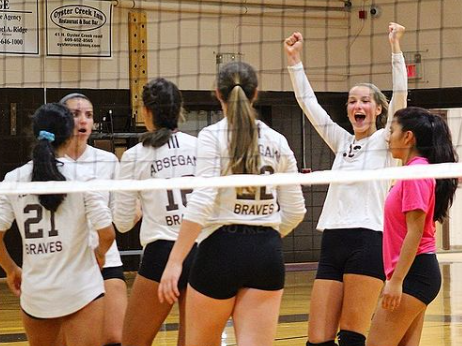 Jackie Fortis and the Absegami Braves had a dream season last year. The sophomore middle hitter had the opportunity to join with her older sister Kailyn on a talented team that finished 22-3 and had the best record in the CAL. One of the many season highlights was beating Brick Memorial in the second round of state playoffs before being knocked out by Colonia in the quarter-final. One could call the season magical.

Fortis got a late start with her volleyball career after excelling in other sports. She has only played two years now as a junior and does not play club due to her involvement in other sports. Her height and athleticism earned her a starter role at middle and she had a breakout year as a sophomore. Even as a freshman she notched almost 100 kills.

Jackie is an obvious athlete with superlative coordination. Her height and frame distinguishes her as a formidable opponent even though her smile and youthful exuberation on the court would indicate otherwise. But this year as an upperclassman, and with all of the starting varsity players, except her, moving on to graduation, she will inherit a leadership role that she is more than up for.

Not only will Jackie be put in the spotlight for a leadership role, but she will most likely be switching from middle to a six rotation outside position. Her versatility will be of greatest benefit in that role and we expect her to thrive in both new roles.

It remains to be seen what kind of career numbers Jackie is capable of with an obvious short season looming due to COVID, but considering she has accumulated over 250 kills already, and will be the go-to player on the attack, she has unlimited potential to get in the Absegami record books before she moves on to college. But that’s probably the last thing Jackie is thinking of as the new season approaches as the success of her team and teammates appears to be largest goal. Like a true leader…

Here is our interview with Ms. Fortis….

Tell us a bit about yourself, Jackie?

I’m a junior from Absegami High School in Galloway Township where I grew up. I play volleyball as well as basketball, track and field and this year soccer as well because of the postponed season. My family consists of my Mom and Dad (Athletic Director at Absegami) and my three siblings who all attended or currently go to Absegami.

I actually only started playing volleyball my freshman year. I had no experience before jumping right in to the high school team. My two older sisters played all four of their years at Absegami and I never missed a game. From that, the game just caught my eye and I’ve never looked back since.

I’m 5’10 and this upcoming season I’ll be playing outside hitter. I don’t play for any club teams since I started so recently and volleyball wasn’t always my main sport. My favorite position is middle blocker which is what I first played coming into the team at Absegami.

Tell us about your Absegami teammates. Who do you expect will be this year’s standout and up and coming players?

This year, I’ll be taking on the court with an entirely new group of girls since we graduated the other five starters last year. I expect it to be a challenge but there is a lot of very promising potential talent. I think up and coming players would be our new freshman, Dessiah Key, as well as returning players Alex Montoya, Sophia Marsico and Deesha Chokshi. There may be even more talent to uncover in any new players who normally played a fall sport during volleyball season who will now be able to play with us this season so it’s all very exciting.

The Braves had an amazing season last year finishing 22-3 and going to the state sectional quarter-finals.  What is your expectation for this years squad?

I think since we lost all of our starters it will be a challenge of course but I never doubt the coaches and my teammates in their abilities. We will have a whole bunch of new players coming out and have a lot to potentially succeed with.

You had a truly outstanding season as a sophomore with 124 kills, 15 blocks, 34 aces, and 86 digs. What are your goals for this upcoming season?

My goals will be to just keep building on my potential as a player since I’ve had such a short time to learn and specifically learn how to be a dominant outside hitter instead of middle as well as become the leader this team needs this year. Our leaders last year set the expectations super high and I’m excited to fill in their shoes.

Tell us about your sister Kailyn and her influence on your volleyball career.

Kailyn was our setter last year and truly picked everything up so quickly. She was thrown in just about every position throughout her volleyball career and showed me you can play anywhere on the court if you work. She influenced my career because she made it really comfortable for me and guided me. (Not to forget she also set me perfectly almost every time in my first two seasons.)

NJP considers you as one of the top players in the state. Do you plan on playing volleyball in College? (If so, which ones are you looking at?)

I actually never considered playing volleyball in college until after last season when everyone mentioned it. I was always intending on playing basketball since it was my sport all my life, but opportunities may come and I’m open to playing of course.

Who inspires me is definitely Coach Kerry Flukey has had the absolute most thrown at her as coach of the girls volleyball program and has never once not succeeded through it all. She has had to completely scratch lineups mid-game, teach brand new players and more but she always seems to make it work, and perfectly. She is such a great player herself and her vision and volleyball IQ is something I always want to embody when I play.

In the off season, it’s rare to catch me not playing another sport, so I’m really always busy and staying in shape.

Which high school or club player was the toughest competitor that you faced and why?

The toughest competitor was from last years playoff run when we played Brick Memorial High School. They had crazy talented outside hitter, Kate Stoughton, who was a sophomore just like me and we pretty much matched up all game. She was a smart player and hard to block, but my job was to shut her down and it was very tough.