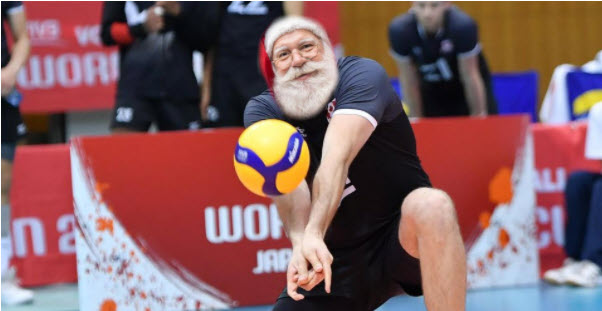 Growing up in the North Pole, there are not many opportunities for volleyball players. Santa Claus, a/k/a Kris Kringle, came from humble beginnings, but his love for the game erupted into a record setting career as both a player and a coach. NJP takes a look back at this incredible story as well as the eventual knee injury that tragically ended his playing days but started up a legendary second career as a global leader in toy distribution.

The Kringles knew from a young age that Santa had a passion for volleyball. In fact the first words out of his mouth were “dig” and “kill”. At first, they had extreme worry that their son may be a serial killer but they eventually figured out that his passion was for volleyball.

Santa, known in high school as “The Claws”, was a battler on the hard court. While most of his friends were playing hockey, he convinced the administration at North Pole HS to start a volleyball program in 1954 and was part of the original team at the school. Needless to say there were not too many other teams available to play but this did not deter the big man from pursuing his passion. He lead the Patriots in Aces as a junior and senior and broke the school career kill record with 1,186 over his four seasons at varsity. The record still exists today.

He also started and played at a volleyball club called the NP SixPack. He was in amazing shape when he started the club and was working out several hours per day. The highly recruited senior had a tough time deciding on where he would spend the next four years at the college level. So he decided to pursue international opportunities that arose after his famed high school career.

While on tour in Europe, he met the love of his life, Jessica Van Winkle, at a club in the Netherlands. After he met Jess, the workouts stopped, and Claus put on quite a bit of weight. But he still had an immense passion for the sport as the duo toured the world, eating local cuisines, tasting the sweet nectar of german beers, and spending little or virtually no time in the gym.

He toured with the French national team for a year and finally found his natural position as setter after being an outside almost his entire life. He was comfortable being the teams strategic leader and quickly found he had hands of pure butter. This became another issue as his weight continued to baloon.

It was in 1965 when the tragic event happened as he came down awkwardly after a monster block in the International Championships in Zurich. It was said that his added weight contributed to the torn meniscus injury but Santa was determined to get back on the floor as quickly as possible. After surgery at the Vienna Children’s hospital, he spent an extended time in rehab and enjoyed spending hours with the many kids who were rebounding from their injuries and illnesses.

Kringle worked like a demon to get back in shape. The physical therapy was brutal and painful but he persevered and was back to running in just 4 months. He traveled to South America and started to make a name for himself in Brazil after turning Pro.

The pressures of the tour were wearing him down and he knew Jessica wanted to settle down and have kids. But everything crashed when he reinjured the same knee at a tournament in Rio and he knew his playing days were over.

Claus just could not deal with not having volleyball in his life. Despite not being able to play, he looked for alternatives to stay involved in the game. He tried Coaching for a while and led the US womans team to a Championship in 1970 in Helsinki. But he knew it was time to return to his home and start his life after volleyball.

Upon his return to the North Pole in 1971, he married “Mrs Claus” and the couple were in desperate need of work. He decided he wanted to try to help more children like the ones in the hospital during his rehab but was drinking heavily and did not know where to start. He met with some of his old volleyball friends and they joined an AA group called Santa’s Workshop.

Suprisingly, all of his old buddies that joined the group were liberos. All of sudden, a new concept just clicked. He used the liberos to help him start manufacturing toys. North Pole warehousing was cheap and the liberos worked long hours for little pay making the business operation and P&L work. The rest is history as Santa grew the small shop into the largest toy manufacturer in the world. He sold the business to Jeff Bezos in the 90’s but still makes a point to travel the world in late December each year and give out toys to whoever was good.

So the world is very thankful that things worked out the way they did. If not for that knee injury, Christmas would just not be the same. So the moral of the story is, sometimes bad things happen. There is pain, suffering, anxiety and loss. Although we just can’t understand the reasons at the time. And we come to learn that as one door closes, another one opens. We get through the tough times, are resilient and return to life with a new perspective on what’s important. And, of course, it has a famous ending…

Sounds like 2020 to me… Hopefully, 2021 is famous for the entire NJ Volleyball community…