Who Will Be NJ’s Best Libero in 2021? NJP Thinks Konrad Bieniek Has The Stuff! 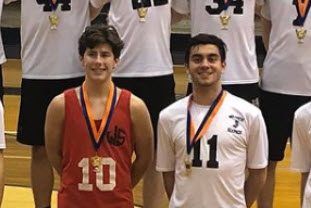 The Libero may be one of the most important positions on the floor in high school volleyball. The ability to defend as well as orchestrate the attack with the first pass is vital to a sound offense. A player at this position requires speed, exceptional intuition and anticipation, and passion that drives reckless abandon while displaying quiet confidence and leadership at the same time. Konrad Bieniek of Jackson Memorial fits the definition.

Konrad will end his 4-year varsity experience with the Jaguars this Spring. Like Alex Work from Fair Lawn last year, Konrad is a clear leader in the category for the class of 2021.

Bieniek has settled in as a major contributor on every club team he has played on. Last year, he was the starting libero on Warren Six Pack 17-1 National team that was super successful bringing home several tournament victories in NJ and out of state. He assumes the same role for the WSP 18-1 National team this club season and gets to play with some of the best NJ has to offer as teammates.

Last season was supposed to be Jackson Memorial’s year to rise to the top of the rankings and was projected to be at the top of the Shore Conference along with Southern Regional. But COVID brought more than we can handle with the start of the pandemic hitting during the first week of high school practice. So it turned out to be the season that never was and shattered hopes for many Jaguar seniors who seemed to be coming together in a perfect storm of talent.

This year, we are hoping for a different plan and after a year of social distancing, wearing masks, and having life as we know it crumble before our own eyes. The glimpse of a new boys high school season on the horizon can provide a much needed return to some level of normalcy. And a possible gift to those who saw their season disappear in March 2020, before it even began.

Konrad is just an exceptional athlete on the volleyball floor. He combines a massive VBIQ with superior physical attributes that separate it from the rest. It’s always fun to bring the big hitters and larger than life giants to your college campus, but the wise will recruit the backbone and leadership qualities that will help drive their program to four years of success. Konrad’s ready…

Here is our interview with Konrad Bieniek…

Tell us a bit about yourself, Konrad?

I attend Jackson Memorial High School, in Jackson, New Jersey. I live in Jackson as well. I am a part of the graduation class of 2021. I have amazing parents and one older brother, Justin.

I’m 5’10 and I play for the Warren Sixpack 18-1s team and the Jackson Memorial Volleyball team. I play as a libero for club volleyball and the past 3 years as a libero for high school as well. I also love to play outside.

Tell us about your Jaguar teammates. Who do you expect will be this year’s standout and up and coming players?

The Jaguar volleyball program we have at my high school is fantastic. There’s a lot of talent and a lot of great guys and friends that I’ve met over the years. I expect our team to be very solid this year with players like Ben Fryc, Destin Llola, Steven Bado, and Jason Casper. I expect Destin to be an up and coming player as he started playing club volleyball this year, and he’s adapted to the game very well/quickly and has become an amazing player.

I have known Konrad since he was 10 years old. I coached his brother’s 14s team and Konrad would come to some practices and some tournaments. It has been such an honor to have been able to coach Konrad all these years. Each year he gets better and better and his desire to be the best is something I love about him. — Six Pack Head Coach Pedro Trevino

I’m still at a crossroads on this topic, I’ve been considering playing for a while. I definitely, at the very least, would want to play club volleyball in college. I am open to all options right now, and I will consider all of my interests and options seriously to see what’s the best fit for me.

You have played on the premier club team in NJ at your age group for the past years. What are your personal goals for this season?

Well I would first love to have some sort of season this year, that would be a start. But, I think my personal goals would be to play the best volleyball I’ve ever played this year and really make this last year count. I want to strengthen all the areas of my game to be able to play my best. For my team, I would love to, assuming we have a season, be able to get a bid this year and go to nationals.

What is your expectation for this years Jaguars squad?

I expect our team to be a very solid and well-rounded team. I think we have a big opportunity to win the Shore Conference and get far in the State tournament.

Tell us about your club volleyball experience at Warren Six Pack.

My experience at Warren Six Pack has been nothing short of amazing. I’ve been with them so long, and I’ve loved every minute of it. They’ve helped me grow as a volleyball player and get me to where I am now. I’m forever grateful to have had the opportunity to be a part of such an amazing program; all the practices, tournaments, coaches, and players have all added to this amazing experience. All the coaches are fabulous and they really put all their effort into getting everyone to improve. I’ve also met so many great friends and people throughout the years and I’m really thankful for that.

Tell us about your Jackson Memorial Coach Jason Ulrich.

I’ve known Coach Ulrich since middle school, and he’s really an amazing guy and excellent coach. He’s helped me a lot with growing as a volleyball player and a person. He really genuinely cares about everyone and he puts his heart into the game and the team. He knows the game very well and can find areas of improvement for everyone. He runs very good practices and drills which have helped me strengthen my game.

I play beach volleyball; I absolutely love it.

Which high school or club team was the toughest competitor that you faced and why?

Our toughest competitor in high school was Southern. They are a very good and reputable team; games with Southern are always intense, tough, and close.

How are you and your family dealing with current world situation with COVID-19? How did the cancellation of the Spring high school season effect your team?

My family has been healthy and doing well thankfully. My brother had a COVID-19 a few weeks ago and was fine and, luckily, didn’t infect any of us or anyone else.

To me Konrad is the top player in the state. Not only is he a great volleyball player but he is such a good kid. I will miss coaching Konrad but he has a very bright future. Six Pack Head Coach Pedro Trevino

I love to fish and ski/snowboard.

I play on pursuing engineering in college.