Union Middle Spencer Boakye Getting A Lot of Attention 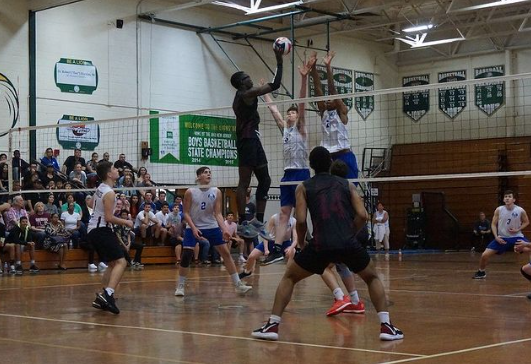 Union put out such a highly competitive team in 2018-2019 in the UCC. They only lost to two teams all year, SPF three times including the County Finals and St. Peter’s Prep in the state playoff tournament. They pushed SPF to three sets twice and lost a heartbreaking first game to the Marauders 36-34 in their playoff match. They had a ton of seniors returning for 19-20 but like most high school teams in New Jersey will be counting on players who have never played at the varsity level.

Spencer Boakye is the lone returning varsity player from the very successful Farmers team in 18-19. He will be a senior leader on a team that has some very nice club talent in addition to Spencer’s presence in the middle.

Boakye has been playing basketball since a young age and has excelled for Union High. His frame is a perfect match for both sports and his athleticism is high. His vertical joined with his long lanky arms allow him to put up a nasty block while also being a conduit on the offensive front as an attacker. It will be interesting to see if Spencer rotates to other pin hitter positions for his senior year.

Scotch Plains Fanwood is the interconference rival that Union has in its sights for the Spring campaign. SPF kept Union from a near perfect season in their last campaign and will be looking to settle the score. SPF is in the top 20 in NJP’s preseason rankings. Union has earned a Top 40 spot so their work will be cut out for them.

Spencer provides a great matchup against SPF’s middle Anthony Ngumah as both may be battling for Union County first team honors. Boakye has seen a steady stream of college interest and really wants to continue his collegiate career with a volleyball in hand.

Here is our interview with Spencer Boakye…

Tell us a bit about yourself, Spencer?

My name is Spencer Boakye. I live in Union, New Jersey and I attend Union High School.  I’m a volleyball player in the class of 2021 and I am currently 17. I also play basketball and have been playing since the 5th grade.

I’ve played volleyball for 4 years and I started when I came to high school.  When I was a freshman my current coach pitched the idea of me playing volleyball for my school and I decided to try it out for the fun of it. At first, it was very frustrating because I wasn’t that good, but as my skills started to develop, I started to enjoy playing more and more.

I am a 6’3 Middle Blocker and I am slowly working towards playing other positions.  I’m not sure of my vertical but I know it’s pretty high based on my ability to compete with players taller than me.  I’ve never played club because I also played basketball during high school and the seasons conflicted, so I only played volleyball in the spring for my school.

Tell us about your Union teammates. Who do you expect will be this year’s standout and up and coming players?

Most of our previous varsity players graduated, so our team is going to be mostly JV players moving up and making an impact immediately.  I do expect my fellow seniors Ryan Lin and Christian Emilzo to step up and have a good season for us. As well as Alex Boulin (Junior), Nathaniel Thompson (Junior), and Faraz Bhatti (Sophomore) to have breakout seasons and get their names out there. There are plenty of other guys that I didn’t mention that I know could also make an impact, but those we will have to wait and see.

Yes, I do plan on playing in college.  I currently hold 14 offers between the division 1/2, and NAIA levels.  I’m also still considering some Division 3 Colleges in NJ such as Kean and NJCU.  I haven’t made too much progress as far as making a decision, but I hope to soon.

I plan to study accounting and/or business management in college.

Who do you feel your biggest competitor will be in Union County this Spring?

Yes, my current head coach Cesar Vega helped a lot along the way.  Without him, I probably would have never even considered playing volleyball.  His coaching and encouragement are what made me into the player I am today.

Favorite pregame music is any song by Young Thug, the greatest rapper of all time he always gets me hyped and locked in before a game.

I like to play basketball with my friends and play video games mostly NBA 2K21.

I workout a lot by myself, but I also play basketball for my school which also helps me stay in shape and improve my athleticism in the off-season.

My support group is my family as well as my entire school, Union does a great job of supporting all their athletes both the students and the teachers. I’d like to give a big shoutout to everyone else who has supported me on this journey, I truly appreciate it.  And a big shoutout to them ayoo fam boys, those my guys 4L.

How did the cancellation of the Spring high school season affect your team?

It was pretty sad for us, our team was mostly seniors and all the guys were all looking forward to the spring season after working so hard in the offseason just for it to get canceled.  We all knew it was something out of our control so we accepted it for what it was and just continued to work on our games individually.

Who do you credit your current success to?