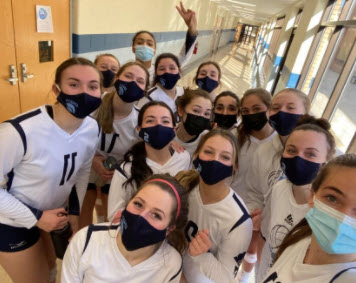 Sparta girls varsity volleyball is off to a great start this season, after defeating two NJAC divisional rivals—Mendham and Roxbury. Both matches were won in dominant fashion, ending in 2-0 sweeps.

After Roxbury grabbed a 3-0 lead to start the first set, Sparta responded quickly with a run of their own. Three consecutive service aces by setter Arianna Puleo, followed shortly after by back-to-back aces by Alexis Smernoff, helped Sparta mount a 9-1 run.

Roxbury head coach Anthony McMichael called a timeout, hoping to slow Sparta down, but Sparta had other ideas

Two more aces by Alexis Smernoff, sandwiched by some Roxbury miscues (setter-error and rotation error), led to another timeout by Roxbury. Sparta held a 15-5 lead at that point.

Sparta took off from that point, only allowing 5 more points to Roxbury the rest of the set. Sparta took the set 25-10.

Set two started a lot different for the Gaels, taking an early 12-9 lead over the Spartans.

Sparta kept hanging around, but still trailed 20-15 late in the set.

“We knew Roxbury was going to come out a lot stronger,” Sparta head coach Derek Hall said, “Luckilly I’ve got a lot of seniors who can lead, and we were not afraid of the moment today.”

After a Sparta timeout, the Spartans went on a 6-2 run, forcing Roxbury to use a timeout of their own. Roxbury’s lead was down to 1 point.

With the score tied at 23 apiece, Roxbury burned their final timeout of set, with hopes of setting up a plan to finish the set strong.

Sparta ended the game on a 3-1 burst, ultimately finishing off the Gaels. The Spartans took the second set 26-24.

Outside hitter MacKenzie Wiggins finished the match with a team-high 11 kills, to go along with three blocks and six digs.

It cannot be understated how important it was for Sparta to get off to a hot start, especially being in such a competitive division in the NJAC.

Hall said, “There are no easy games on our schedule, so our girls know that and are excited for that,” he added, “We waited over a year to play and these girls want to play the best teams.”

Coach Hall has also provided a ton of energy to this Sparta girls varsity volleyball team, which has been a big lift for the team.

“Volleyball is all momentum. To have it [energy] in your head that you’re a great team, ‘Hall being Hall’ really helps to get the energy up,” Wiggins said.

The Spartans host West Morris Central on Monday, followed by trips to Pope John and Jefferson on Wednesday and Friday, respectively.