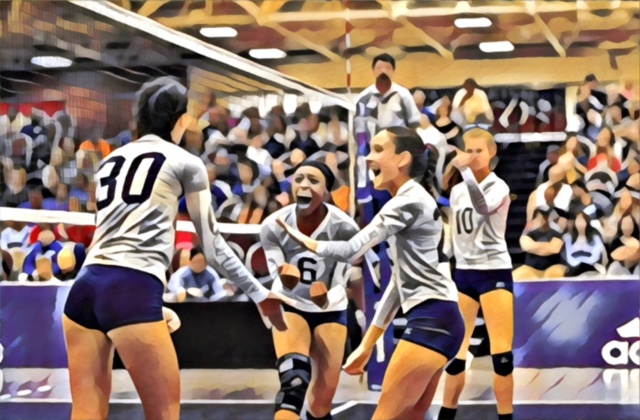 It’s been an eventful first week of girls high school volleyball in New Jersey. After all the anticipation and of course the uncertainty as to whether the season would ever happen, it must be pure elation to just be on the floor with friends and teammates and playing the game we love.

What have we learned from week one? Well, one thing is very certain. And that’s the uncertainty surrounding the schedule. Teams and Coaches have been scrambling to replace games on the schedule when numerous cancellations have occurred. As teams follow the new “protocol” during the pandemic, numerous squads have been shutdown due to exposures and player safety concerns. We do not expect this to change for the remainder of the girls season so as much as we appreciate a centralized schedule, go in knowing that it’s a dynamic moving target.

This is our first season covering the girls. Compared to the boys, there are just so many differences. The sheer number of players, teams, and games dwarf the volume of the boys. Having a few months between each season was expected to be a god send but with both girls and boys running back-to-back, there is not any time to re-load and re-focus. NJ.com has really stepped up with a revised platform and additional information for power points, stats per game, and other features. Brian Bobal has always done an amazing job with both volleyball and hockey.

NJP strips out the subjectivity in its ranking formula. That piece of our website is all about the math. The stories and player interviews are always the fun part of the site as we learn more about the players and their teams, as well as their inspiration and motivation.

We use our game predictor to validate our full state ranking system. Typically, we use the NJP Predictor algorithm after 2-3 weeks of game data. That formula weighs schedule strength and score differential as two major factors. But for the girls and the shortened season, we decided to put our pre-season formula on the line. The preseason ratings were established over the summer and factor in last years ratings and takes into consideration the percentage of stats lost to graduation, remaining stats, and other trends.

It was a rough start to the game predictor at the beginning of this week. For our old hockey site and for boys volleyball, we have averaged picking winners at 84%-89%. We were running at 92% early in the boys season two years ago. Other than ranking and rating validation, the picks are just for fun. Hopefully, teams can use it as motivation when they check in daily. A lot of the NJP website is about fun while giving you the information you need about NJ volleyball.

We are going to take a look at some of the teams that we may have not gotten right in the preseason ratings. For good or bad.

The Mendham Minutemaids received a top 10 ranking based on the Wilcock sisters dominance in 2019. Lauren was an odds-on favorite for player of the year for the Spring but her decision to focus on beach volleyball to align with her college commitment to South Carolina will see Mendham drop substantially. With her sister Sara making the same decision, we see Mendham probably ranked in the 30’s rather than #7. The Minutemaids still have a ton of talent so don’t count them short going forward, but losing two players of that caliber is just tough. Lauren led NJ in kills last season with 434. https://njpowerranking.com/2021/01/02/lauren-wilcock-in-a-league-of-her-own/

NJP has the Hudson Catholic Hawks rated as #21 in NJ for the preseason. After Sophia Wintonick transferred to HC from Colonia, the Hawks are just stacked on both the offensive attack and the back row. As much as #21 is a very high rating, we see the Hawks ending up in the top 10.

The Jefferson Falcons earned a #69 ranking in preseason. So far this season, they have been perfect beating Morris Catholic, Chatham, Hackettstown, and Morris Tech. They have a big match this Friday when they go up against Sparta who knocked off both Roxbury and Mendham in week 1. Jefferson, no doubt, will be moving up.

Dwight-Englewood went to the non-public semi final game last year with a 20-7 record. We may have underestimated the impact of losing Yale commit Audrey Leak to graduation. The Bulldogs are off to an 0-2 start, losing to both Tenafly and Leonia. They are struggling and will have to play #3 Bogota this week to boot.

The South has 2 top 10 teams with Southern at #5 and Williamstown at #9. Their match this week did not disappoint going three sets and coming down to the final two points. These are two top teams in the state and we expect them both to stay in the top 10, with Southern maybe even edging up a bit.

JP Stevens garnered a top 10 preseason ranking. They won their first two games and then ran into East Brunswick. East Brunswick is 4-0 and could be on their way to an undefeated season. They have JPS once again on 4/6 with Simi Carlsen from the Hawks and Hailey Benesz from the Bears getting another chance to show off their stuff. EB is deep and getting solid play not only from Hailey, but from Paige Anania and Anaya Prince on the attack and Megan Lee, Ysabella Sapienza, and Laurel Sheard on the back line and at setter.

Immaculate Heart, NJ’s #1 preseason team, has not hit the floor yet. They have three games this week with one against Northern Highlands on Wednesday. Their toughest games to stop an undefeated regular season will be from NH, Wayne Valley, and possibly Pascack Valley.

Midland Park was projected as a top 10 team but they have not hit the floor yet and do not play until Friday.

Cresskill was not highly rated by NJP but don’t be fooled by their 0-2 record. They took both Rutherford and Glen Rock to three sets.

Hunterdon Central was #88 in the preseason projections but have had a great start at 3-0 and wins over Montgomery, Hillsborough and Bridgewater-Raritan. A team to watch.

How good are both St. John Vianney (3-0) and Donovan Catholic (2-0) at the shore? Both teams are very deep and it should be a spectacular game on 4/1 when they face off at Vianney.

You get the sense that this season is going to go by in a flash. We will be highlighting our daily snipes going forward to give credit to those players who have some memorable nights. But take it all in… as all your memories from this unique season are sure to last a lifetime.