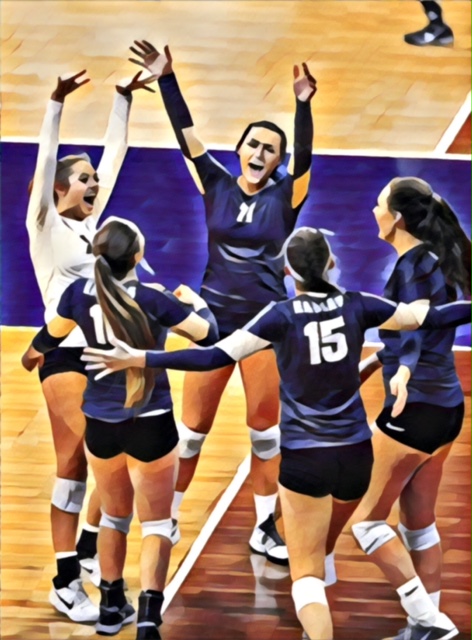 The Wednesday schedule has some special match-ups for the NJ Volleyball community to enjoy. Here is what is “on the slate” in the state…

Hudson Catholic has had a steady climb up the ranks and will now step on the big stage against #4 Williamstown. Williamstown has been stellar this season with just one loss, a three set thriller to #2 Southern. Williamstown is coming off of a 30-3 season and a state sectional title and their 7-1 start is picking up where they left off in their succesful ways. Senior McKenzie Melvin has already racked up 54 kills, 63 digs, and 12 aces and sophomore Julia Scwab has been equally outstanding. Jasmine and Jaylah Rolle have been impressive on the attack and Mia Owen has owned the back row. This team is solid and deep and one of the best South Jersey has to offer. Hudson Catholic is the perennial stand-out team in Hudson County. They are super deep with talent and have a dynamic pair of defenders with Drew Leonardis and Sophia Wintonick. Up front, they boast an athletic and start filled attack with Cristal Paulino-Rubel, Kiannisha Santiago, and Omayre Valle who have smashed 46, 56, and 37 kills respectively in the short season. Omayre already has 31 aces in seven matches. If Hudson was home, we may have given them the nod, but traveling to Williamstown is going to be tough and the Braves will be the best team they have faced this season. NJP PREDICTOR’s CALL: Williamstown 25-27, 25-22, 25-21

The Norsemen have run the table so far this season and boast a perfect 7-0 record. They have beaten some very good teams such as Old Tappan, Pascack Valley, River Dell, and Tenafly. Senior Noa Shuminer is just a great outside hitter and is averaging ten digs a match. But Demarest is a team that just does not allow the ball to touch their side of the floor. Libero Connie Yu has 123 digs so far which is off the chart. They boast super strong middles and have three players with near 20 blocks each. Olivia Cammaleri is an exceptional setter and Coach Powell has already had 14 players making contributions on the floor. Wayne Valley got a very late start but are starting to roll. They have yet to lose a set this season. Senior Julianna Lavner is the go-to attacker for WV who have a solid squad with seniors Anna Balinksi, Lauren Antonio, and Alex Calello as well as juniors Kendall Ferguson and Jen Howarth. We expect this to be a three set match as well. NJP PREDICTOR’s CALL: Demarest 25-20, 24-26, 25-21

After disposing of Northern Highlands, Immaculate appears to be on a road to an undefeated regular season. No out of state road trips for them this year due to the pandemic so they will have to get their fill of competition inside the Jersey borders. Immaculate is the elite team of NJ. They have only lost one game to a NJ team in the last three years. No weaknesses. And plenty of firepower. Seniors Alyssa Lowther and Gianna Grigaliunas are player of the year candidates. That is if sophomore Brookelyn Talmadge doesn’t beat them to it. The emergence of sophomore Alexa Grigaliunas and junior Deanna Whelpley contribute to their elite status. Indian Hills is 5-2 and will be revved up for the big match against #1. Abigail Franks, Julia McCreedy and Megan Sears fire the attack and Paige Desiderio is an outstanding strategist at setter. Hills will need to bring their A+ game and can’t afford any unforced errors against the dominant Blue Eagles. NJP PREDICTOR’s CALL: IHA 25-16, 25-17

Rivalry game at the shore pits a well oiled machine at Southern against a firey competitor in Toms River South. Toms River boasts some solid impact players that are typical difference makers in key matches. 6’4″ D1 commit Kelle Andwander is a force on the attack and the block. She has already accumulated 56 kills and 14 blocks for the 6-1 Indians. Erin Maguire strategizes the attack and TRS is very strong defensively. But Southern has been near perfect this season winning all eight matches and dropping just two sets. Rachel Pharo has been all-world for the Rams but they are chocked with talent and have Stephanie Soares at setter. Freshman Jordyn Hamlin has been a great contributor and is a player to watch. NJP PREDICTOR’s CALL: Southern 25-17, 25-19