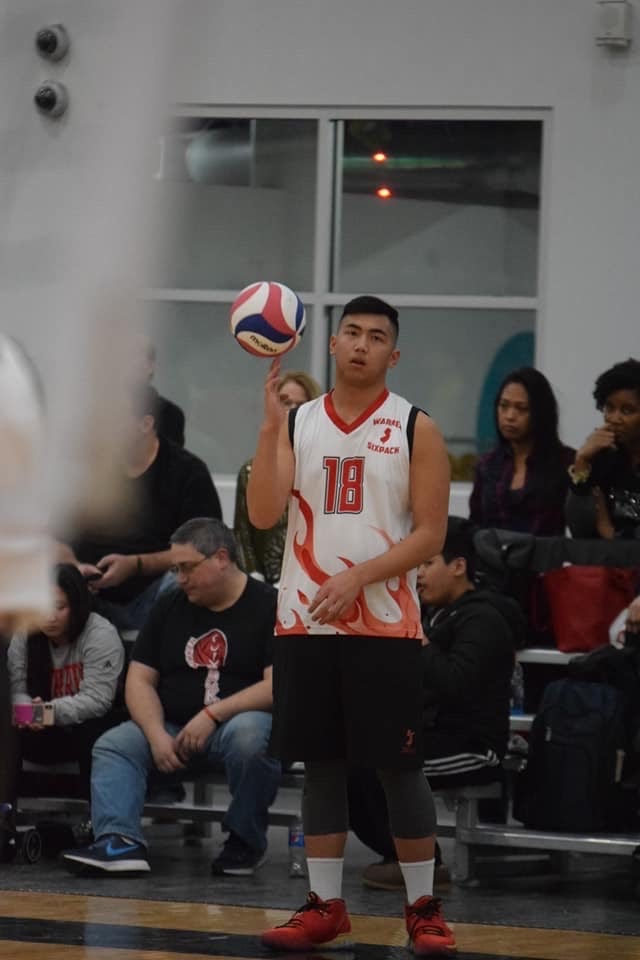 When we think about all of the high school volleyball teams in New Jersey, Scotch Plains-Fanwood sticks out as having the most young players involved in club volleyball. Over the past two years, they have had more participation than any other high school team. Unlike the girls, where there are about 30 different options for club volleyball, the boys have what we call “The Big Eight”. Warren Six Pack attracts many of the elite players and is centrally located in NJ to facilitate travel from all areas. And there are 7 clubs (CJVA, EVA, Princeton VBC, AVVC, SOS, Core, and GSE) that are more regional in nature that absorb most of the quantity of club players at the high school level. Many players aspire to play at Six-Pack that come from areas not in close proximity to get access to the visibility they may provide and the brand they have established.

For a player like Scotch Plains-Fanwood pin hitter Nate Sta Rosa, it’s worth the 45 minutes to an hour commute to Six Pack to play against high caliber players at practice and at tournaments. Nate has been able to build and hone his skills and like most high school players, has high expectations for a big senior year. And Nate has had a fun and terrific ride thus far being the main contributor to the high flying Raiders who remain undefeated and have yet to lose a set after 12 matches. He has had the luxury over the past few years to be playing with Anthony Ngumah on his club team who is the SPF middle for the 2021 spring season. They have chemistry on the attack and know each others movements well.

Nate is a complete and versatile player. He serves well as evidenced by his 38 aces thus far. He has put up 79 kills, 8 blocks, and 28 digs on a team with a tremendous amount of talent across the board and you need to share touches. Nate has great instincts and quickness. He can get digs based on his reflex and quickness and has not problem putting kills away with high energy and force.

SPF is a team getting output from all four class years. They have a strong senior class with players like Nate, Anthony, Dave Farin and Dan Sicinski. They have talented juniors like Aidan Heifetz who has 42 kills, 3 blocks, and 31 digs and Amir Johnson who has 8 blocks and 18 kills. Two sophomores are standout players, their setter Nick Schmidt (222 assists, 16 kills, 2 blocks and 17 aces) and Zach Chung (119 digs and 17 aces). AND they have a freshman standout in Tim Ennis who in his first year has 45 kills, 62 digs and 17 aces. This will be a team to reckon with for years to come.

We have watched Nate at tournaments on and off the court. You can see his close-knit family values by the way he interacts with his Mom, Dad, or family members. It makes you want to root for him more. And its great to see a good kid get the opportunity to have the time of his life during a senior season after such a crazy year in the world. There is no doubt Nate will be successful in his future, on and off the court, due to his work ethic and passion for doing things the right way. Go Raiders!

Tell us a bit about yourself, Nate?

Hello my name is Nathaniel Sta Rosa and I attend Scotch Plains Fanwood High School. I will be graduating in 2021. My family consists of; my parents, 2 brothers named Emilio and Gabe and 1 sister named Isabella. My 2nd oldest brother Gabe started the volleyball program at our high school in 2016.

I started playing volleyball in the summer of my 8th-grade year. I initially started playing because my brother started the program at our high school and I wanted to play a new sport I haven’t played before.

I am 5’11 and I play for Warren Sixpack on the 18-2’s team. My main position is opposite and it definitely is my favorite position I have played.

Tell us about your Raider teammates. Who do you expect will be this year’s standout and up and coming players?

At first, I was planning to go play in college but chose academics over athletics. I will be attending Rutgers University and hope to play on the club team. The major I am studying is Computer Science.

You and the team have had a great start to the Spring thus far, the team is undefeated, and you are leading the way with 78 kills and a whopping 38 aces. What are your goals for this year’s high school campaign?

My biggest goal is definitely to win our section and also to win our conference. We are on a 2 year win streak in the UCC and hope to win it once again. I hope to make it very far in states and to have a fun rest of our season.

Tell us about your experience at Warren Six Pack…

I started playing at Warren Sixpack my sophomore year and we had an amazing team. We made it to nationals that year and had a very fun time playing great competition. I used to be the setter with Nick Schon but later switched to playing opposite which was a great decision.

Is this Scotch Plains-Fanwood’s year?

This is definitely our year. We are a really solid team with most of our players playing club volleyball during their off season. Our potential for what we can do this year is insane.

My family is doing well with the current situation with COVID-19. We have all been fully vaccinated and hope to be able to do more stuff as the year goes by.

During the off season I play club volleyball at Warren Sixpack. It’s really fun to play with many top players from around New Jersey. My favorite part of Club is going to overnight tournaments but this year we were unable to go to any.

My biggest support group is my entire family but my main support comes from my parents. They have brought me to all my tournaments and games for all the sports I have played. Without their support I would not be able to play like the way I do now.