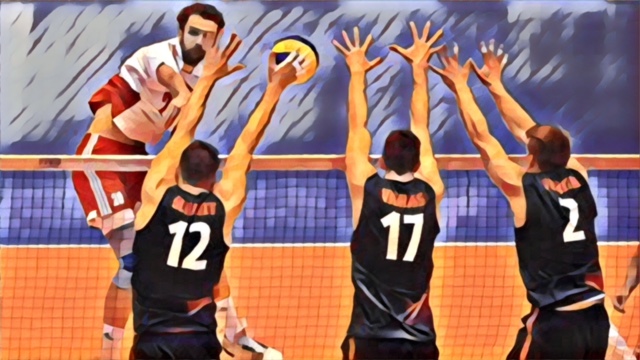 Remember to submit your NJP Clip of the Year entries to njpowerranking@gmail or DM us through IG or other social channels. Be sure to include your name, school, grad year, which contest you want to enter, and who else is in the clip. For you hitters, don’t forget to give your setter or passing lib a shoutout. Also remember, it has to be a high school clip. We have made a couple of exceptions so far for players who do not have a high school team so please note that. Some of the clips have been very creative.

Here are a few more sample entries for fans to take a look at for the upcoming NJP Clip of the Year Contest.

Saturday night is the deadline… keep those clips coming!

Old Bridge and CBA snuck a game on the schedule and played today. CBA at #2 and Old Bridge at #3 provides a premier match-up of elite teams in NJ. The Knights, who have won the last two state championships, have moved up to #3 recently after getting a late start to the season. Old Bridge had been “near” perfect this season, and were points away from closing out Southern, but ended up losing to the Rams for their only loss coming into the game. CBA has been perfect and has lost just one set all season (Marlboro).

These teams have also spent a ton of time on the court together and had quite a few pre-season scrimmages. The players know each other well and many play for the same clubs. This was a significant event for the season and we would have expected a very close three set match. What we got in return was actually a pretty wide margin victory for the Colts. CBA continues to show they are an elite team at the top of the state rankings. The Magnificent Seven was business as usual today despite the enormity of the game and got it’s normal even blend of contributions across the board.

Colin Stevens conducted a perfect orchestra on the attack notching 23 assists while John Doehner put on a blocking exhibition pushing back 5 while also putting down 5 kills. Andrew Kwapniewski led the Colts with 6 kills and Dooling and Mayeregger added 5 each. 2 aces from Liam Crosby and 1 from Andrew Sasso who also added 4 digs and 2 kills. We were not expecting a 25-19, 25-13 score, but it was CBA’s night and they rolled on the momentum. Both teams have 14 wins now, but OB dropped their second loss.

Don Bosco rolled to another win tonight with a straight set win over Ramapo 25-20, 25-13. Senior Matt Ramirez had the best game of his career with 8 kills, 2 blocks and 2 digs and Peter Shahin had 26 assists along with an ace, a kill and a block. Nice contributions by Ben Manasse-Polls, Liam Egan and CJ Barker. The Ironmen continue to improve their connectivity on the court and will present a challenge to any opponent in playoffs. They are now 15-2 on the season.

Another big game on the schedule was the match-up of North 2 Sectional rivals Newark East Side and undefeated Payne Tech. Both of these teams have had Cinderella seasons and have emerged rather unexpectedly to be division leader and top 20 ranked teams. Beastside has just 2 losses, both three set heartbreakers to top ranked teams Livingston and Hunterdon Central. Payne has been perfect thus far and put that record on the line tonight. We knew the slipper would not fit for one of these teams but did expect this one to be super close and probably three sets. The Predictor favored NES and they did not disappoint as the Red Raiders came away with a straight set 25-22, 25-17 victory. Payne is now 16-1. Newark East Side improved to 9-2. These two teams may play again later this week in the SEC tourney.

Three teams took down the Predictor tonight (so far anyway…), Ridge, Bergen Catholic, and Bergen Tech took down the algorithm. Seven games unreported but NJP is 18-3.

Ridge has been an up and down team all year. They are playing at a very high level but continually fall short in certain games and then excel in others. Tonight, they were without their star player Justin Hong but Red Devil players like Ben Grossman, Brendan Davy, and Davis Hood stepped up to bring down Hillsborough in three sets.

These Skyland matches are always so tough to predict and the teams are equally talented and use momentum to drive their success. Tonight was Ridge’s night though as they fought off losing set 1 and dominated the last two sets 25-17 and 25-19. Grossman had 11 kills and Davis Hood had three blocks to go with his 4 kills. Brendan had an excellent performance with 7 aces, 6 kills, a block and 8 digs. Boro dropped to 11-4. Ridge is now 8-7. It’s unfortunate that Ridge got he #8 seed in North 2 as they are certainly one of the teams that can beat any team in NJ on a given night.

Pope John is now 8-1. They drubbed Chatham in straight sets today. Mike Lavin and Collin Mills with strong games for the Lions. Both had 7 kills and Collin added 18 digs while Mike had 12 digs and 4 aces. Dylan Angner with 21 assists and 2 kills and Trace Healy added 2 blocks, 5 kills, and 2 blocks.

Moorestown, with another big win, have run their record to 11-0. Jefferson improved to 12-2 after a first set scare from Sparta but they still prevailed in straight sets 27-25, 25-11. Gloucester Tech is now 13-4 as Preston Forchion continues to impress with 10 more kills.

Tremendous performance by Anthony Trivers tonight for Washington Township. He blasted 15 kills and 3 aces while adding 6 digs and a block. Tyler Jones had 26 assists and Ian Hermanson had 9 kills and 4 digs in a really intense 3 set, fun Olympic match-up with Cherry Hill East. WT is now 9-4 and CHE dropped to 10-6. Union is now 14-3 overall after taking down Summit tonight. Kingsway destroyed Highland limiting them to 13 points overall and is now 13-5. SPF with a blowout win against 9-6 Elizabeth as Nick Schmidt has another masterful performance with 29 assists, a kill, a block, an ace and 15 service points.

Bayonne demolished Hoboken to move to 12-3. Huge rivalry match tomorrow against St. Peter’s in the Hudson County semi-final. The winner will likely get Kearny in the final. Bayonne and SPP met on Monday and it was a three-set thriller that went down to the last point. Hoping there is a stream to share on this one.

West Milford gets the #1 seed in the Passaic County tournament. The Highlanders are a strong team are likely to take this tournament as the best team in Passaic County. We expect them to get Passaic in the semi’s and probably Wayne Hills in the final.

Fair Lawn with the #1 seed in Bergen County and we expect them to have an easy path to the finals. We project Bergenfield or Bosco will be waiting for them.

With the playoffs here now, it’s always great to get some perspective on the important things in life. This inspirational story is about how a volleyball team faced massive adversity but dealt with it the best way they knew how… Worth 10 minutes of your time…