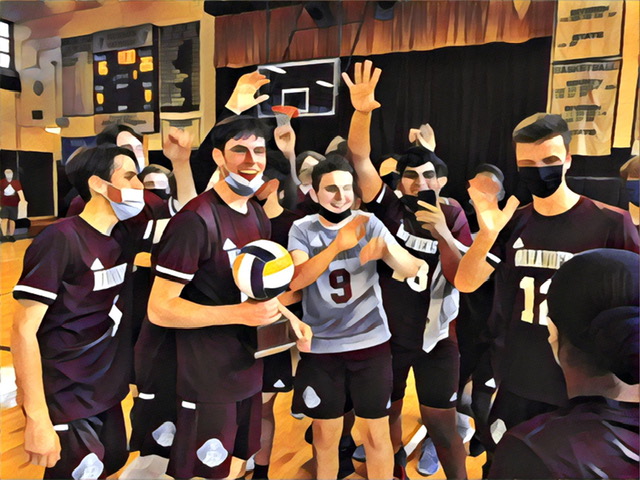 LOTS to look at for tonight’s inner look. Let’s jump in…

Passaic traveled to West Milford for the Passaic County Tournament semi-final. It was a tough start for the Indians as the Highlanders jumped to an 8-0 first set lead. Ryan Thenell and Company continued their assault in set one, winning 25-10. The second set started the same way with Thenell continuing his success on the service line as he smoked 8 aces during the match and posted the Highlanders to another big lead. But Passaic had some fire left at the end and revved up their own engine as they dug deep and got back into the match. Thenell (7 kills/8 aces) and Christ (9 kills/1 ace) powered the attack at the end as well as the Highlanders hung on for a squeaky tight 28-26 victory to close out the match. WM, now 18-1, will go on to meet Wayne Hills in the Championship match.

The St. Joe’s Metuchen and Old Bridge match was like a Rocky movie today in the GMC tournament semi-final. A back and forth battle that went three sets and down to the final point. Trevino and the Falcons took on the long-time champion and weren’t given much of a chance coming into the game. St. Joe’s got their big punch in early, winning the first set 26-24 and setting the tone with a first round knockdown. The Champs turned up the heat and pummeled the Falcons but they just wouldn’t go away. They hung tough. The second set could not get any closer but the Knights evened the score with a 25-23 win. The third set was equally as riveting as the Champs gave it everything they had but the challenger dung deep and would not relinquish. The best part was that Christian Trevino did not need to have his eye cut open to see in the final few points, but like Rocky, the match went to the Champs 25-23 on the final scorecard. Adriaaaaaaaaan! Great showing by the Falcons and another big win for Old Bridge who is now 16-2.

East Brunswick edged South Brunswick in the other GMC tournament semi-final. The Bears got a well distributed attack orchestrated by setter Kush Oza who spread the wealth and sets between 5 attackers. Zhu, Ernst and Spring had 5 kills and Cassotis and Pember had 4. Sean Spring had 6 aces in the match and Oza had 22 assists in addition to two kills, 2 aces, and three digs. The Bears are now 13-6 and will be a probable underdog in the finals against the Old Bridge who has won two consecutive state titles.

Hunterdon Central, Hillsborough, Bridgewater Raritan and Ridge have been smacking each other around all year in the Skyland Conference. They are 4 of the top teams in NJ. When the Skyland conference tournament comes along each year, anything can happen. The semi-final matches occurred today and the final is tomorrow. Of course, both semi-finals went three sets. #11 Hunterdon Central took at #16 Ridge and #9 Hillsborough faced #24 Bridgewater Raritan. The first match went as planned with Hunterdon Central beating Ridge. The second match, not so much as the Panthers of BR took down Hillsborough. All of the team stats looked identical. But we have two teams headed to the finals. A few shoutouts from the matches… Conor Regan from BR had 10 kills, 4 blocks and 6 digs and Alex Song had 30 assists, 8 digs, a block, and two aces. And another great game from Eitan Jentis who had 7 kills, 3 blocks, and 5 digs. Justin Hong from Ridge planted 16 kills and three blocks and Ross Bancken had 24 assists and 2 kills. Avery Gould had 8 kills for Hunterdon Central and Gavin Lefebvre had 21 assists, a block, and an ace. HC will get the nod from the NJP Predictor in tomorrow’s final but our guess is it will be three sets!!

In Bergen County, Fair Lawn eased past Indian Hills to advance to the Bergen County Tournament Championship game. Gil Zyndorf had 19 assists and 4 aces and Dan Choi and Itay Akad had 6 kills each. The Cutters are now 15-6. Don Bosco, after losing the first set to Bergenfield, took the next two sets and will play Fair Lawn for the Championship. After losing in an identical match the day before, the Ironmen came up with a winning formula. CJ Barker jammed 16 kills and Matt Ramirez had 5 blocks and 5 kills to go along with another great performance by setter Peter Shanin who had 28 assists, 3 aces, 2 blocks and 7 digs. The Cutters will get the nod tomorrow from the Predictor.

Let’s move over to the shore and highlight some of the key games results there. Howell took #1 CBA to three sets today. But CBA made a statement in the last game with a 25-5 third set win. The Colts are now 16-0 and are going to be so tough to beat. Colin Stevens had 40 assists and Dolling and Sasso added 11 and 10 kills respectively. Another classic performance from the Magnificent Seven. Wall (11-5) took down Marlboro in quarter-final action. Palluzzi has been exceptional and had another great game tonight with 12 kills, a block, and 2 aces.

And who would have guessed that Scotch Plains-Fanwood and Union would be facing each other in the Union County Championship? Well…. I guess “everybody”. This will be the third meeting between the two top teams in the UCC. SPF took the first 2-0, and took the second 2-1. The last match went 25-23 in the third set. As SPF puts their 21-0 record on the line against the 15-3 Farmers, will it be three times a charm or will the law of averages kick in. The home court will favor SPF and could be the difference in the one. SPF coasted tonight over Summit as did Union over Elizabeth. It should be a great final!

We know some seasons for certain players and schools will be ending soon in the “lose you are out” state tournament. We want to say thank -you for tuning in during the double season with girls and boys. And also remember, NJP cover NJ volleyball all-year round, not just in-season. We look forward to seeing you soon as post season awards, and many other features of the website can keep you fined tuned for all your volleyball news and interests.

The NJP Clip of the Year contest is no longer accepting entries. We will be announcing finalists this week… Stay tuned for fan voting in all three categories. NJP will present all of the finalists later this week from our internal vote. We will then let the fans decide on who wins each of the three categories. Our response in the boys contest was overwhelming so we may need a couple of rounds of semi-finals first… Voting will commence this weekend on the website.

The NJP Player Rater has been very popular this season. There is a new update on Sunday that can be seen at https://njpowerranking.com/2021/05/23/updated-njp-player-rater-may-23rd/

A new updated sectional ranking was completed Sunday. It sheds more light on some on the impending match-ups post first round… a link to the update is here… https://njpowerranking.com/2021/05/23/updated-njp-player-rater-may-23rd/

As you enter state playoffs, it’s a time for heroes! But heroes come on many forms and not necessarily on the court… hoping you all get your standing ovation at some point in your life…