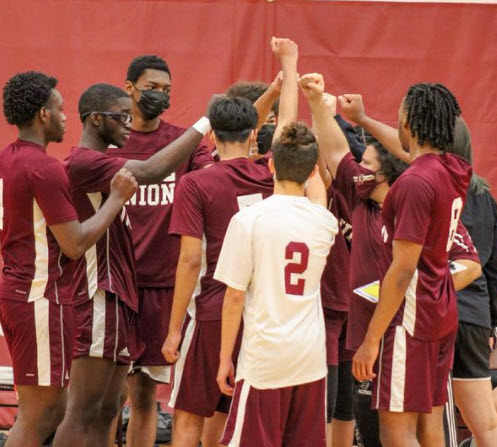 #28 Union has a “statement” game tonight as they advanced to the North 2 Quarter-finals with convincing straight set victory of Ridge. At 17-4, and three of their losses coming to #2 SPF, one would think Union would be a top 10 team in the rankings. The Union Farmers have been second guessed all season long having the vast majority of their games played against Union County opponents. The big win also gives SPF a boost for those that have second-guessed their presence at the top of the rankings.

They have a few exceptions to Union’s county rich schedule that clearly distinguish them as a force to be reckoned with in the state tourney. Union played #11 Kearny early in the season and lost a tight three set match. They played #19 Bridgewater Raritan, a top 20 team almost the entire year, and beat them in three sets on May 13th. And tonight’s win against #15 Ridge is a defining moment for this team as they leap forward into the quarter-finals.

“We came in today’s game as the underdogs and we handled business”, said D2 commit and star middle Spencer Boakye. “I feel like we are one of the most underrated teams in the state, and we are just gonna keep working hard and showing how talented of a team we are.”

Ryan Lin echoed some of the same sentiment. “We came into this season not knowing what to expect but we’ve all surpassed our expectations and are continuing to reach greater heights. This team isn’t ready to stop and we’re going to keep fighting hard until the end.”

Boakye had 5 kills and Lin had 12. Faraz Bhatti had 30 assists, Nathaniel Thompson had 6 kills and Alex Boulin led the team with 13 kills. Alex told us “It was a hard fought victory. Our team wasn’t playing to our full potential at the beginning but we pushed through and showed who was better in the end.”

We reached out to Josh Caster from Ridge tonight as well. As always, he was very respectful and gave Union kudos. “It was a well fought game today. Union is a great team and made some great plays today. We fell short due to some errors, but overall an intense game the entire time.”

Union now gets their rematch against Kearny and will look to avenge their early season loss to the #1 seeded Kardinals. The dream scenario for Union is to advance past Kearny, beat Newark East Side, the 4 seed and probable opponent in the semi’s and then get one more crack at SPF in the Sectional final. In the three losses to SPF, they have gotten closer and closer in every game played through the 3 matches and this could be the time they tip the scales. It’s a fairy tale scenario that could lead them to the final 4. But let’s not get ahead of ourselves. Lot’s has to fall in place. But after this year, a little day dream never hurts…