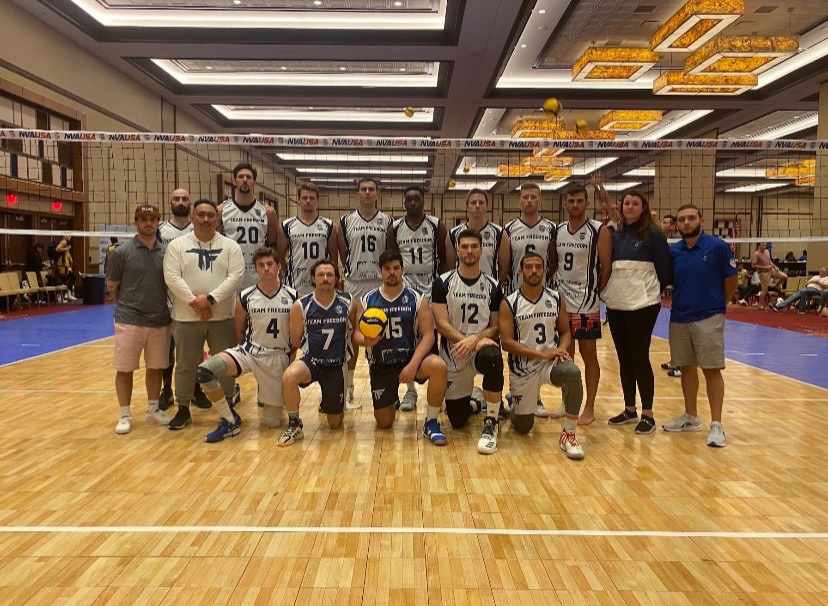 HERE IS THE LINK TO WATCH GAMES — https://www.nvausa.com/schedule

The NVA is preparing for Championship weekend and looks to crown it’s second Champion in the young existenece of the professional volleyball league. NJP had a chance to sit down with Carlo Edra, the Head Coach for NJ’s Team Freedom, to pick his brain on the event and, as always, he provided a world of knowledge for the NJ Volleyball community to get ready for Championship weekend.

Carlo is not only the Head Coach of Team Freedom, but he also heads up the Men’s Volleyball program at NJCU. The Gothic Knights are coming off an amazing season where they earned a ticket to the NCAA Dlll National Championship Tournament for the first time in their existence. Carlo is also a former player at NJCU and has a long history of Playing and Coaching excellence.

Team Freedom is made up of many former NJ high school players as well as local college standouts over the years. Justin Beaumont, owner and general manager, started the team and wanted to keep a lot of local talent to help properly represent the state of New Jersey in the volleyball world. Carlo shared this information about the Freedom roster.

Edra told us there is also a roster of 20+ additional standout players who practice with the team who can potentially be future Freedom players. There are other NJ based players on other teams in the NVA that fans can add to their watch list. Thomas Burrell from St. Joe’s Metuchen is on the Chicago Untouchables and Langston Payne, from Piscataway, is on Southern Exposure.

It’s great to see these former NJ high school and Club players excel at the pro level. It’s clear that Volleyball has a path to professional play, like many other sports like Baseball, Football, and Hockey. For those that have a passion for playing and eventually coaching, the NVA can be a goal for NJ students. As Volleyball, especially Men’s volleyball, continues to advance as the fastest growing sport across the country at the high school level, these leagues have the potential to continue to gain fan support in the next decade to create opportunities for more players and added compensation levels.

The NVA structure has ten teams broken into two divisions:

The Championships (technically event #4), is coming up soon. Here is the schedule and seeds:

The Quarterfinals start on Friday, July 9th with Semifinals on Saturday, July 10th.

The 3rd place match along with Championship match will be Sunday, July 11th.

You can watch the livestream of the matches on Youtube at  https://www.youtube.com/channel/UCa15EyEa3I6BqsPxZt0L6SQ or search for “NVA USA”

Coach Carlo was upbeat about Freedom’s chances in the tournament. “We hit the ground running at the beginning of the season and it carried over to event #2 in Atlantic City.” said Edra. “We were the last undefeated team in the league at 5-0. We’ve been struggling a bit as of late having dropped our last 4 but 3 out of those 4 have been 5-set losses.  We’re showing a lot of fight but we’re not closing out matches like we should be.”

The brilliant start to their season peaked when they faced The Stingers in Atlantic City. This is the team they will face in the quarter-finals in the upcoming Championship tournament. Team Freedom rode a wave of momentum created by local fans in Atlantic City. Carlo shared “Something I have to shout out is the crowd and fans that gathered for our two wins against LA Blaze and the Utah Stingers in Atlantic City. Feeling the energy knowing they had our back with every point we won gave us that little extra motivation to win that match for them. It was surreal to hear them chant ‘Let’s go Freedom’.”

The pandemic has thwarted fan support at many early events so it was a welcome feeling. “The staff and players kept looking at each other mind-blown that we had that kind of support. I saw a bunch of current high school and college players in attendance during our matches. I love seeing it because it gives those guys something to work for. It’s humbling to know there was a point where the guys at Freedom were once high school players wishing and hoping to play at a certain level.”

The NVA has had just one Champion in their league history. The Utah Stingers won in the innaugural season. With the 2020 season cancelled due to COVID, Freedom will start their quest for the NVA title against the defending Champs. “Justin Beaumont and I are very confident going into championship weekend. We know what adjustments we need to make as a team and we will be working on those things in the practices leading up to the event. We have a really tough draw having to play the defending champs in the Utah Stingers but we are ready for the rematch from our epic 5-setter this past May.”

You can watch edited Freedom matches on youtube at the following link: https://www.youtube.com/channel/UCjdSzukOTmYODr8mXdxqyGw/featured

That amazing feeling when your serve comes in just to hot to handle… https://www.instagram.com/p/CSFg72SFZw4/?utm_medium=twitter

Does anyone know how many days are left until the start of the NJ Girl’s High School volleyball season? Anyone? Anyone? https://www.instagram.com/p/CSFPGYDlJWS/?utm_medium=twitter

Congratulations to Michaela Ryan and Josh Wilets for beating the NJP Predictor in the Olympic Men’s Volleyball Contest. Story at http://njpowerranking.com https://www.instagram.com/p/CSCoLNWlHet/?utm_medium=twitter

Girl’s High School Volleyball Preseason rankings will be out tomorrow. Opening day is just 38 days away. Check them out at http://njpowerranking.com. https://www.instagram.com/p/CSBHrdLsoLt/?utm_medium=twitter

Did anyone beat the NJP Predictor in the Olympic contest? Beach results are in for phase 1 at http://njpowerranking.com https://www.instagram.com/p/CSA9-YaMCok/?utm_medium=twitter

Mendham setter Katie Webber sits down with Josh Wilets to discuss the North 2 Group 3 sectional title, playing in a 6-2 system, and the Minutewomen team makeup for the fall at http://njpowerranking.com https://www.instagram.com/p/CR8CZVGMiPr/?utm_medium=twitter