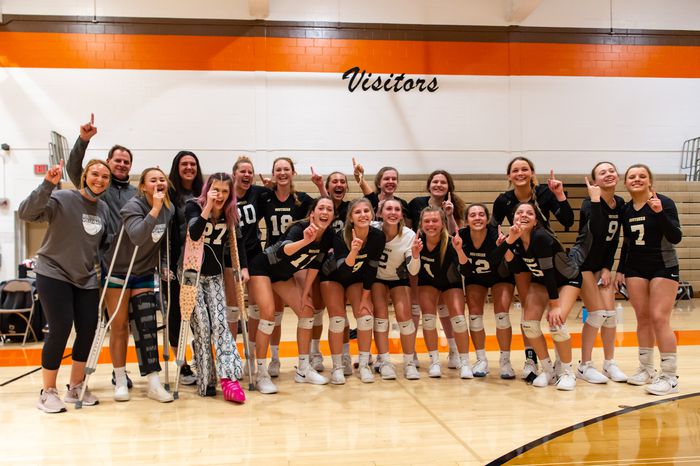 Hailea Krause has been waiting for this opportunity since fifth grade. After falling in love with the game of volleyball at such an early age, the daydream of leading your high school team to a state championship is one that every young athlete has at one time or another. Hailea had a phenomenal junior season, was second on the Rams in kills, and an instrumental weapon in Southern’s arsenal as they finished 17-1 and won their Sectional Group title in the shortened spring season. But her senior year is setup to be something extra special as she will look to lead the Rams to their first ever state championship.

The Rams have made the Group 1 Sectional final 3 times in their existence, winning it once in 2008 and getting to the TOC. The Boys teams at Southern have dominated the high school landscape for well over a decade securing 6 state titles and 11 state title game appearances since 2008. The Rams are well coached and always have a steady stream of talented athletes emerging from the beach at the shore. This Fall’s girls’ squad is reeling from losing many talented seniors, but we expect them to again be in the hunt for a state title.

Hailea will, in all probability, be the go-to, six rotation, outside-hitter that exceptional volleyball team are built around. She will replace Rachael Pharo who committed to play D3 volleyball at NJCU this fall. Krause is tall and athletic, has great instincts near the net, and has proven she can put the ball away as evidenced by her near 100 kills in the short season.

She will be honing her defensive skills and will get many more chances to dig this fall. But most of all. She will bring senior leadership to a team that will likely have a handful of seniors on the varsity squad. Her positive attitude and in-game spirit will distinguish her as one of the top team players and leaders.

Advice to Southern opponents this fall… Fear the ponytail!!

Here is our interview with Ms. Krause…

Hi Hailea? Thanks for taking the time to join the NJP player interview club today. Tell us a bit about yourself?

Hi! My name is Hailea Krause. I live in Manahawkin, New Jersey and I attend Southern Regional High School. I graduate in the year 2022 which means I will be a senior this upcoming fall! I live with my mom, stepdad, two younger sisters and younger brother.

“I am particularly proud of how well she “moves on to the next play” when adversity comes her way… such as being blocked. I think she will embrace being the “go to” hitter for Southern this upcoming season!!” – Charlie Maxwell – Silver Hammers Director

This will be my 8th year playing volleyball, I started playing rec volleyball in the 5th grade because my mom signed me up and I wanted to try something new. I fell in love with the game of volleyball very quickly and I knew that is what I wanted to do in the next years to come.

I am a 5’9 outside hitter and I can also play back row. I have played for East Coast Crush for the past 3 years. My favorite position to play is, of course, outside hitter. I have been the same position since I started volleyball and I always knew that is where I belonged on the court. But I am always willing to play any position I am needed to play.

Tell us about your Ram teammates. Who do you expect to be this year’s standout players in the Fall?

My teammates are all very talented and each and every one of them contribute to our team. We are like one big family, and I know that we are going to do great things. Brianna Otto is a great all-around player and she can do many things but she will most likely take care of our back row this year. Ceyda Zenger is another experienced player who resides in the back row. Jordyn Hamlin, Corinne Hughes, and Sam Hanneman are going to be a big part of our offense just like they were this past season. A couple of incoming juniors Kaya Nascimento and Amanda Floystad will contribute in a big way. As well as sophomores Molly Regulski and Lili Davis.

Can you tell us about your club experience at Silver Hammers and East Coast Crush?

I never competed at a tournament with Silver Hammers. It was more of a practice with our school team that Cathy and Charlie Maxwell had organized. Other girls competed at tournaments but most of my time actually was spent with East Coast Crush South with a great group of girls from nearby schools. At our last tournament, the Atlantic City invitational, we were very successful and won first place in the silver bracket 17 open. I have been with them for 3 years now and this year I will be starting my 4th.

“Hailea has a tremendous desire to be great in volleyball….. She works real hard on constantly improving in all areas of the game.” – Charlie Maxwell – SilverHammers Director

My goal is to continue to play volleyball in college, but I am currently undecided as to where I would like to go. I plan to become a real estate agent when I’m older even though you do not need college for real estate I still want to study business and get my degree!

You graduated some special seniors including setter Stephanie Soares, libero Maddy Gellis, outside hitter Rachael Pharo, middle Emma Gildea, and DS’s Adrianna Conforti, Erin Alegre, and Regina Ingling. How do you think the Rams will rebound for the Fall?

We had a very special season, and those girls are extremely special as well. Not playing with them will absolutely take some getting used to for all of us. But coming off our sectional championship, I know we are all ready to get to work again. We have great chemistry and experience on our team, and I think we will rebound just fine.

Southern had a great run to finish 17-1 and win a Sectional Championship last season in the Spring. What is your best memory from the season?

My best memory from the season was after winning the sectional championship really realizing that all of our hard work had finally paid off.

You had an outstanding junior season smashing 96 kills, second only to Rachael Pharo. What are your personal and team goals for your senior season this Fall?

My personal goal is to always get better because there is always room for improvement. But it is also to be a leader on the court for my team this season and push them all to their full potential. My goal is to work as hard as I can after having a shortened season and play my very best. My team should be very successful this season and our goals stay the same every year. Our long-term goal is of course a state championship. But before that we have a lot of work to do, and my teammates and I know what coach maxwell expects of us. I would love to experience a state final game just one more time.

All of my coaches and teammates have had big impacts on my volleyball career and are all role models to me. But Rachael Pharo, who you may know, has definitely been my biggest role model when it comes to volleyball. I wouldn’t have had such a breakout junior season if it was not for her. She pushed me to my full potential.

Every coach has positively influenced my volleyball career because I would not be the player I am today without them. But Coach Maxwell has of course influenced my game the most. Southern’s boys and girls volleyball teams would not be where they are today without him. He has made me smarter and stronger not only in the game of volleyball but life as well. Two other coaches that have influenced my volleyball career are Cathy and Charlie Maxwell. They were my coaches for my first year of middle school and they taught me the basics and everything that I needed before I competed for the high school team. They continue to support, believe in me and push me to be the best volleyball player I can be. Last, but not least, my club coach Phil Kening. He sees my full potential and is determined to help me achieve all my goals. He prepares me for the competitive school season and assists me in my recruitment process.

My teammates motivate me because I know we all want the same thing whether it’s playing time or to win so that pushes me to always work hard and try my best.

Don’t subject yourself to another football Sunday… save some grief and stay up to date on all the latest NJ volleyball news at http://njpowerranking.com. https://www.instagram.com/p/CWz8CpuA72n/?utm_medium=twitter

NJP announces the All Conference teams at the Shore for NJ high school girls volleyball at http://njpowerranking.com. https://www.instagram.com/p/CWz5D3gAJ9K/?utm_medium=twitter

NJP announces the All Conference teams in the Cape Atlantic for NJ high school girls volleyball at http://njpowerranking.com. https://www.instagram.com/p/CWz45GpgE5q/?utm_medium=twitter

NJP announces the All Conference teams in the NJIC for NJ high school girls volleyball at http://njpowerranking.com. https://www.instagram.com/p/CWz4v9xgosu/?utm_medium=twitter

Braves rise to the top of the USA Today Region 2 girls high school volleyball rankings. Will they end the year in the National Super 25? NJP makes the argument at http://njpowerranking.com https://www.instagram.com/p/CWxLh_zslfV/?utm_medium=twitter