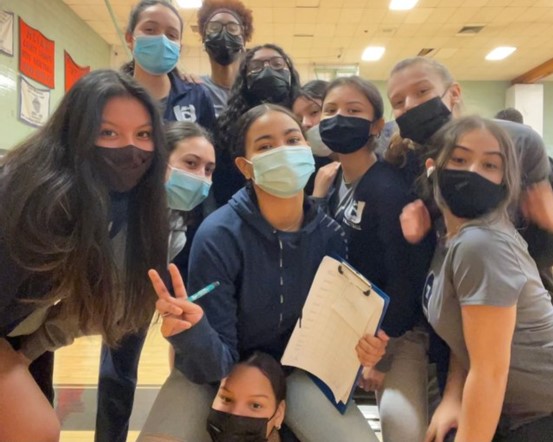 As you look back on the history of Union City girls’ volleyball, it is easy to see the positive impact that Nathaly Flores has had on the Soaring Eagles Program. Prior to her arrival as a freshman in 2018, the team has won just 5 times in 35 tries over two seasons. Her freshman year, the team totaled 8 wins and finished .500 in regular season play and even picked up a state playoff game win.

During her sophomore and junior seasons, UC was 24-9 including an amazing Spring season in 2021 where they finished 11-2. Their two losses were to Hudson Catholic and Northern Hunterdon, both top 10 teams in NJP’s final rankings.

Nathaly has brought an abundance of firepower to the Soaring Eagles programs and a go-to player that has dominated most games she has played. She has been rock solid statistically putting up close to 10 kills/match for two seasons in a row. The 5’9″ outside hitter is athletic and aggressive at the net. She can pound kills with a swift arm swing that produces speed and force on her kills.

Serving has been a huge asset for Nathaly as well. She posted a whopping 51 aces in her sophomore year and added another 28 during the shorted Spring season in 2021. She averages 2 aces per match, and this Fall, we expect her to obliterate the 100 ace mark for her career.

With the emergence of Mathilde Karstens this Spring, the Soaring Eagles have a legitimate dual threat. It should be another successful season for UC as they set their goals high and shoot to take down the perennial power Hudson Catholic Hawks in the HCIAL.

Here is our interview with Ms. Flores…

How are you, Nathaly? Thanks for joining the NJP player interview club. Can you tell us a bit about yourself?

Hello, I’m Nathaly Flores. I’m 17 years old and I live in Union City NJ. I’ll be starting my senior year at Union City High School this fall. I lived with my mother, father and my older sister. When I’m not playing volleyball, I like to draw.

Everything started when I was 14 years old. I only had month in the country and a friend took me to a recreation team in Union City “Complejo Deportivo Polanco”. At the beginning, I was shy. I did not know anything about volleyball at that time and I was afraid to see how the other girls played. But eventually I passed.  The team received me as if I were an old player, feeling the support made me quickly get used to the team.

I’m 5’9″ tall with a 16 inch vertical, and I play outside hitter. My favorite position to play is outside because I get to play all around and feel the energy of every rotation.

My mom is the main reason why I am who I am right now. My mother represents strength, vitality, and unconditional love. She is woman who has overcome challenges so many times in her life. I always feel her support and it makes me stronger.

Tell us about your Union City teammates. Who do you expect to be this year’s standout players in the Fall?

This is one of my favorite questions. Last season united us more and made us stronger than ever. We are much more than a team, we are a family. We all have each others backs, regardless of our mistakes.  I enjoy every second and moment we spend together, and I know that this coming season will be a great story for each of us. This year, we will all get to show our potential. I think our setter, Scarlet Torres, will be the person who stands out the most on the team.  She is one of my favorite setters. I think she was born to be a setter. Her hands become silent when she touches the ball. She is one of those players who really enjoys playing and puts less emphasis on winning or losing. But she has the same positive energy that transmits to the whole team.

I definitely plan to play in college. I think I have a lot of potential which I don’t want to waste.  At the moment, I don’t have any particular college in mind, but it’s time to start looking. I would like to study psychology because I discovered that I have an ability to think about and do things differently than some people.

You have had two dominating campaigns as a sophomore and a junior. What’s left to accomplish in your senior year?

In my last year, I really want to prove to myself that it does not matter how many breaks or hurdles come my way, I can finish.

You had a dominating junior campaign finishing second in the state in blocks with 52 and in the top 25 in kills with 116.  What are your goals for your senior season?

My goal for this season is to take my team to the HCIAL championship. Every single morning I review these goals. This gives me motivation to train and play hard. It reminds me that everyday I have to become better, otherwise, I may let these opportunities slip away.

Union City had a great Spring campaign finishing 9-1 in the HCIAL and 11-2 overall. You return 6 of your 8 varsity players. How will the Soaring Eagles fare this fall? Can Union City win the HCIAL this year?

We are absolutely prepared to win the HCIAL. We have worked hard for that and it is time to make it happen. We must stop listening to the voice in our heads that tells us that we can not and start listening to the good thoughts that has us overcoming our challenges. My team is prepared for it.

Yes, there’s an athlete that I look up to as a role model. Her name is Brayelin Martinez. She’s the outside hitter from the Dominican Republic team. She’s my role model because the way she plays, I see her and then I see myself. She plays with so much energy and with an immense love for volleyball. When I see her play, I only say… someday I will be like her.

The combination of you and Matilde Karskens on the attack spell trouble for Union City opponents this fall. Losing Natalya as setter will make for a tough transition. Who do you expect will be taking the reins at setter?

Not at all. My team and I have faith in our new setter Scarlet Torres the same way we did with Natalya Hechevarria. Working as a team, together no matter what, everything will be fine.

The two coaches who have most influenced my career are Michael Cerreta and Raul Castillo. They always tell me that no matter how many times you fall, there will always be a time to shine. To never stop being humble, because the humbled make a good player and a good person.

For me, one of the qualities that define a good captain is trust. Always be sure of yourself and never question why you did it that way. Another great quality is humility because no matter how much you win, you have to make the people around you feel the same potential and that they can do great things on the court.