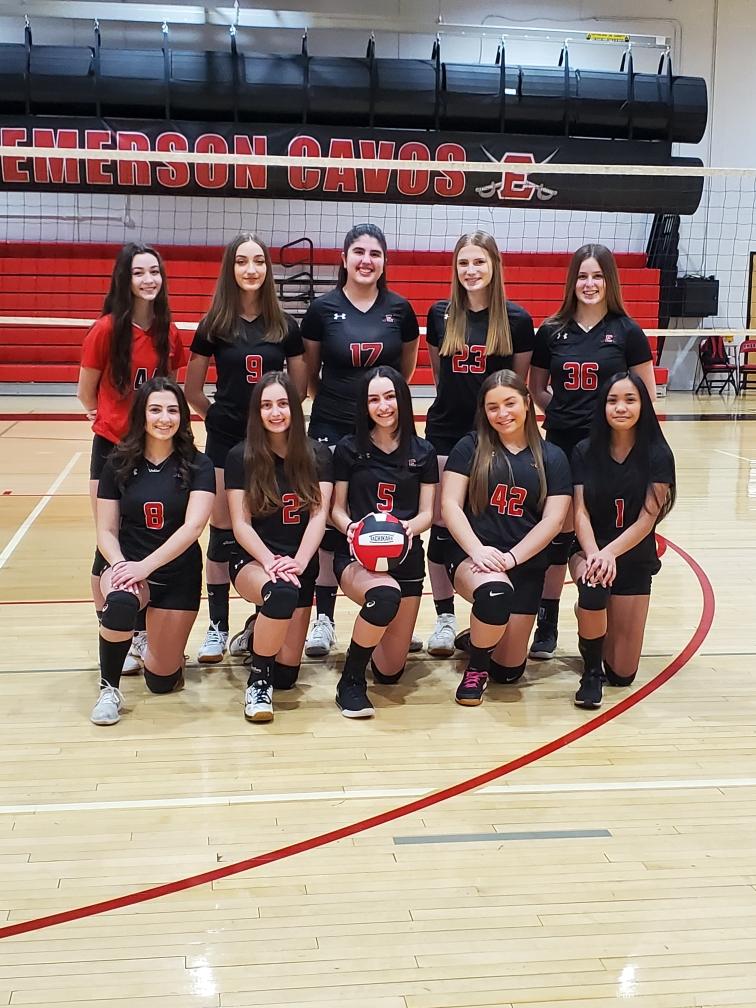 The Emerson Cavaliers have been working hard over the past years to get a winning record on the books and this may be the year they breakout in the NJIC. They broke the top 100 in the NJP preseason poll and earned an 18.76 rating indicating a projected .625 win percentage. This year’s team will have a senior standout, a 4-year varsity letterman Alex Belevan will be the go-to players for the Cavs.

Belevan lead Emerson is every statistical category during the Spring season. She pounded 67 kills in just 11 matches while pushing back 20 blocks. She lifted 75 digs while smashing 26 aces and earning 71 service points. Emerson, despite finishing 4-7, pushed sectional finalist Midland Park to three sets, beat Cresskill twice, and defeated St. Mary’s Rutherford during the season.

For the Fall 2021, they return a large portion of their statistical contributions from the Spring and lose just 4 seniors to graduation. Emerson has a nice group of rising juniors that will be making contributors over the next two seasons. Mia Bonner (21 kills, 55 digs), Natalie Graham (20 kills, 5 blocks), Ryan Grompone (21 digs), and Maureen Zierer (77 digs) are all part of this rising group in addition to rising sophomore middle Sarah Mokrzecki (6 blocks). Two additional seniors will join Alex, Celine Mallouhi (11 aces) and Nicole Romano (12 kills).

Alex is a seasoned volleyball player with club experience. She has solid volleyball instincts and strong defensive skills in her six rotations. Her serve continues to improve and with a full season anticipated this fall, this can be a truly breakout season for the senior. Belevan will be Team Captain and the Cav’s will rely on her leadership as a senior.

Here is our interview with Ms. Belevan…

Hello Alexandra? Thanks for joining the NJP player interview club. Tell us a bit about yourself?

My name is Alex Belevan and I am going into my senior year at Emerson Jr. Sr. High School. I live with my mom and my dog in Emerson, NJ. I am so excited to be a senior this year and I can’t wait to see what the future holds for me!

I have been doing clubs and camps ever since I have been in first grade. I grew up playing a lot of sports such as soccer, softball, cheerleading, and dance, but volleyball was the only sport that I actually fell in love with. I started playing on actual teams in 7th grade and joined my first club team in 8th. Playing on a club team really ignited my passion for volleyball because I got to see how competitive and fun it really was.

I am 5’7 and I am an outside hitter, and sometimes a middle blocker. I have played for Cut Shot for two years and I am planning on trying out for my 18’s year! My favorite position to play is outside because I love playing defense along with hitting. Playing outside allows me to play all around and become a more versatile player.

Tell us about your Cavalier teammates. Who do you expect to be this year’s standout players in the Fall?

My Cavo teammates are very talented and skillful. I admire my teammates because I am always learning something new from them every day. During this past spring season, we really learned how to communicate and play as a team, which has allowed us to score more points and win more games. This season, I expect our junior players, Natalie Graham, Mia Bonner, Maureen Zierer, and Ryan Grompone to really stand out. They have significantly contributed to our team, and I think they will help to lead us to a lot more wins!

Right now, I am focusing on my academics, but whether it is competitively or through a club, I definitely still plan on playing volleyball in the future. If there is ever an opportunity to keep playing volleyball at any level, I would definitely jump on it right away. I have been looking at a lot of colleges this summer, such as Northeastern University and Villanova University. I plan on majoring in business with a focus in marketing.

You led your team is just about every statistical category in the Spring. What are your goals for your senior campaign?

My junior season was the best season I’ve had yet! Though it was cut short, I think it paved a great road to show my potential for my senior season. My overall goal is to help my team win a lot more games. I would love to improve in all aspects in my stats, including kills, digs, blocks, and aces. I have been working all summer on getting stronger so that I can be the best I can be during my last season of high school volleyball.

Midland Park is the usual team to beat in the NJIC D2 division. The Cav’s are rated in the top 100 in NJP’s preseason analysis and are expected to be competitive with Park Ridge and Cresskill this Fall. Where do you see the team finishing in the upcoming season?

During our spring season, we significantly improved in communicating on the court which brought us to more success. We beat Cresskill twice and Midland Park and Park Ridge were both very close games. I think that we can definitely continue our success into this season if we keep up the hard work. All of our players have improved in every skill and that can definitely lead us to more wins this season.

Being a captain of the team this season, I would say I need to be encouraging, focused, trustworthy, hardworking, and passionate.

I have had so many coaches who have really helped me become the player I am today. The coaches I have had at Cut Shot have done so much for me and have helped me immensely improve all of my skills. During my 15’s year, I saw a lot of improvement in myself with the help of my coaches Michelle Yoo and Avery Dravis. They were two of the best coaches I have ever had because they really have a great understanding of the sport, and they were able to help me in skills that I really struggled with. They also taught how to play middle blocker and now I can play it up to par whenever it is needed.

My 16’s year was the year I really started to improve, and all of my skills were finally starting to connect. Taylor Cimillo and Maddie Valko helped me with both my hitting and defensive skills and taught me how to be smarter on the court.

Finally, my high school coaches, Stephanie Cirella and Kelly Wengerter, have taught me the most I know about volleyball. Every day, I look forward to going to practice knowing that we will have a tough, yet fun practice. They have been my coaches since freshman year and they have helped me to grow into the player I am today. Without all of these coaches I’ve had through the years, I wouldn’t be anywhere near the player I am today.