Megan Currie Setting Up TRE Raiders For Success in Fall 2021 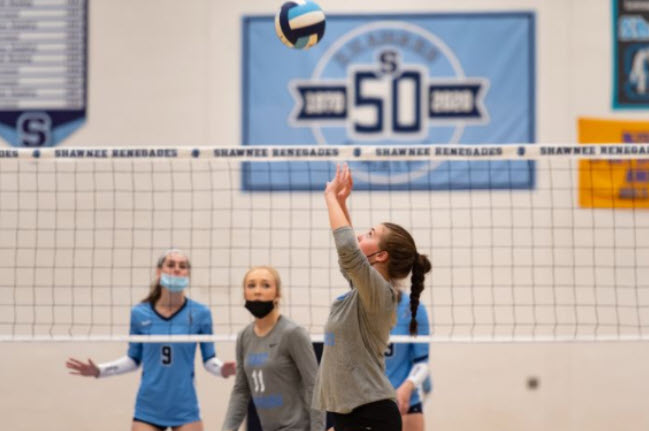 The Shore can be a real battleground for NJ Girl’s high school volleyball and this Fall will highly emphasize that fact. NJP’s preseason rankings have two shore teams in the top 5 and a wide variety of teams that we expect will be floating through the top 40. Southern and Vianney appear to be part of the NJ elite but one of the teams that is expected to continue their rise toward the top of the rankings is Toms River East. TRE garners the #27 preseason ranking and return a seasoned core of talented seniors including their outstanding setter, Meg Currie.

The Raiders return a huge percentage of their statistical contributions from the Spring creating an environment where Meg can further shine as the team’s leader and quarterback. She will have plenty of fantastic options to distribute her sets including rising senior attackers Rebecca Keith, Shannon Donaway, Melissa Marvinny, and rising junior Claudia Cosme. All of these players are club members at Ocean VBC as well as some potential rising underclassman in Valerie Marroquin and Ieva Laurinaitas.

TRE had an outstanding Spring but remained under the radar most of the season. They finished 10-4 with their losses coming to some of NJ’s best in Southern (2x), their rival Toms River South who they also beat during the Spring, and Shawnee in the South Sectional Group 3 semi-final. This Fall could be an opportunity for this senior laden team to really breakout.

Currie concluded the Spring ranked 7th in assists for players in her class year. The Warren Six Pack setter was at the top of her game during the short season. She contributed 20 aces during the season and also uses her 5’9″ frame to contribute on the block defense. She is not afraid to take matters in her own hands as well and tip or smash a kill as part of the offensive scheme. What’s interesting about this upcoming campaign is Meg has been feeding this senior core of players for multiple years and they know each other inside and out. It could be a magical ending for this senior sisterhood of Raiders.

Personally, Megan is well grounded and has has a passion for helping others. She is a swimmer and part of the rescue crew in Ocean County. She aspires to be a pediatric nurse. She has the type of value system that leaders are made of. And the grit and determination to achieve the goals she sets for herself.

Here is our interview with Meg Currie…

Hello Megan? Thanks for joining the NJP player interview club. Tell us a bit about yourself?

Hello! First, thank you so much for this great recognition! I am excited to talk about my volleyball journey, the coaches, teammates, and people that have influenced it. I live in Toms River, New Jersey. I’m going to be a Senior at Toms River High School East and will graduate in 2022. I have 2 brothers: Matt, who’s 19, and Sean, who’s 13. I live with both my brothers, my Mom, Dad, and my dog, Hero.

I have been playing volleyball since the end of my 5th grade year when I attended a summer volleyball camp at Jackson Liberty High School! Though I was a year-round swimmer at the time, I was hooked on volleyball when I saw it on TV and knew I wanted to play it.

I am a 5’9” Setter. I play for both East and my club team, Warren Six Pack! My favorite position to play is setting but I have played every position since middle school. I love when I get the opportunity to be in the front row and when I get to block.

Tell us about your Raider teammates. Who do you expect to be this year’s standout players in the Fall?

I’ve played with many of the senior girls since 6th grade, and we’ve all grown up as players. Playing with them has truly been a great experience since each one of them has their own unique strengths. So, it’s hard to pick only a couple of players that’ll stand out this year. We are looking for returning seniors, Rebecca Keith, Shannon Donaway, Melissa Marvinny, and Sabrina Chunn, to all contribute in a tremendous way, along with Junior, Claudia Cosme.

I definitely plan on playing in college! Academics are really important to me, I want to major in Nursing and become a Travel Nurse and someday work as a Pediatric Nurse in a hospital. I’ve looked at multiple colleges and have loved every single one I’ve seen so far. It’ll definitely be a difficult choice to make.

You will be quarterbacking an explosive offense once again, feeding seniors Rebecca Keith, Shannon Donaway and Melissa Marvinny as well as rising junior Claudia Cosme. All of the attackers are seasoned club volleyball players at Ocean VBC.  Tell us about the dynamic with these players and how you plan to distribute the offense.

I’ve played with all of them for years! Going against each other in practice has made us better and playing together for so long has created a nice chemistry with each other. Everyone has their own style and strength in playing, which makes setting them even more exciting. I’m coached to get the ball to the person who is doing well in the game, along with what the defense gives us. Having so many options to set to, will keep the other team on their toes and hopefully we can put them in difficult positions to win points.

Tell us about your club experience at Warren Six Pack?

I have some amazing coaches coaching me at Warren Six Pack that I’m so grateful for. They have pushed me to be the best I can be and further fed my passion for the sport. All of my teammates are all so nice and inclusive especially considering I’m the only girl from Ocean County on that team. I think that playing with different girls has expanded my ability as a player. I have also been asked to be a volunteer coach for the younger girls on Warren Six Pack, which has been a fun and rewarding experience.

What a solid Spring season TRE had with a 9-4 overall record with losses to some of NJ’s premier teams in Sectional finalist TRS as well as sectional winners Shawnee and Southern. Tell us what stands out in your memories from the Spring.

Yes, it was a great season, and we hope to build on the momentum we created in the spring. Playing against teams like Southern and Shawnee, who are traditionally great teams, only made us better! Seeing their teamwork and unity was inspiring to me! Along with so many great plays and moments we made throughout the spring season, decorating and preparing for senior night last year was a great team bonding experience that I’ll always remember! Also, I am very grateful for Gabby Longo, a senior from last year’s team. We became really close last year, and I will miss her being on the team!

Toms River East gets the #27 ranking in NJP’s preseason analysis making them one of the premier teams at the shore and in the state. What do you expect for the Fall season?

I expect us to build on last year’s success. It will be difficult as we will be playing good teams throughout the A South Division and the Shore Conference. I’m looking forward to finally having a full season to play where we can reach our fullest potential. We all feel that it would be great to end our high school careers with a division and state championship!

My older brother, Matt, motivates and inspires me. He attends Purdue University as an Aerospace Engineer, and he is the smartest and hardest working person I know, which motivates me to be the same. He never quits, he is caring, and not afraid to speak his mind. As my role model, Matt has helped me become the person who I am today, and for that I truly am grateful to have such a great older brother.

My coaches from Warren Six Pack, Josh DeWitt and Kristen Ryan, have pushed and encouraged me to be the best player that I can be. They focus on drills that are specific for the areas I need to improve on by evaluating my performance at our tournaments. I am also very grateful for Coach Gregg Maskale, my East coach, who has seen me through my 4 years. I’m thankful for his dedication to the team!

I have multiple hobbies that I enjoy doing! I love hanging out with my friends and going to the beach. I honestly love my job as an Ocean Lifeguard and couldn’t have asked for a better job. I am an artist at heart and love to paint and draw. I enjoy listening to podcasts about true crime or unsolved cases. Since COVID, I have started playing video games in my free time with my friends. Along with volleyball, I swim for Toms River High School East, but I unfortunately couldn’t swim last year because COVID caused the volleyball season to conflict with swim season. I’m looking forward to swim again this year.