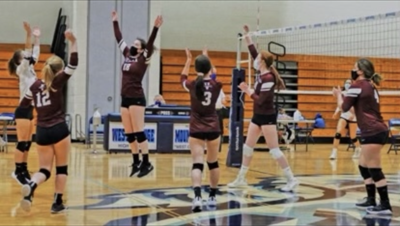 Verona is coming off an outstanding Spring short season, winning the North Section 2, Group 1, sectional title and finishing 13-2. Verona finished just outside the top 30 in NJP’s final Spring rankings, avenged both losses, and finished ahead in the rankings of every team on their schedule.

Verona remains a young team, loses five seniors to graduation, and has just one returning junior from the varsity squad last season. But they have four varsity starters that were underclassman this spring that were all standout players. Their sophomore middle Sydney Aiello was one of those underclassmen that stepped up and had a major presence for the Hillbillies.

Aiello took charge of the middle for Verona this Spring. She blasted 54 kills while leading the team in blocks with nine. She also contributed on the service line with 15 aces and showed her versality and all-around play with 34 digs. Aiello is close to six foot tall and brings a big presence to the front row on the attack and on the block.

We interview a lot of volleyball players at NJP. We get a strong sense from our interactions with Sydney that her passion for the game is instilled by the people around her who have taken the time to help her in her journey. Whether it’s Kelly and Carly Waterman, her neighbors who lead by example, Nittany Lion Jonni Parker who left an impression at a Penn State camp, or her Coaches, Ryan Brown at Verona or Jeff Gogates at Sideout Sports, she absorbs their direction and teachings while being inspired to move forward at the game she loves. We often see these types of players return that favor and become great leaders as well. And we look forward to seeing her leadership over the next two seasons at Verona.

Here is our interview with Ms. Aiello…

Thanks for joining the NJP player interview club, Sydney. Tell us a bit about yourself?

Hi, my name is Sydney Aiello. I’m a junior at Verona High School, and I am graduating in the year 2023. I am a middle hitter on my varsity volleyball team, and I have played on it since my freshman year. I live in Verona, New Jersey with my twin brother and my mother and father.

I am 5’11 and I play middle hitter as my position for my high school team. I play both middle and right side for Sideout Sports.  My favorite position to play is middle because of how many different plays I can run, and how I am able to see everything happening on the court. I also love blocking out of the middle and being able to work with other front row players to help set up the best block possible.

While I love playing volleyball, I do not plan on playing at the college level. I have decided to focus a lot on my academics in college. My plans keep changing for what I want to study, however right now I am interested in studying psychiatry in college.

You had a great sophomore campaign during the spring short season, especially for your class year, slamming 54 kills and 15 aces while putting up 9 blocks and 34 digs defensively. What are your goals for your junior and senior seasons?

My goals for my junior and senior season are to continuously improve as a player, and to make a good contribution to my team. If improved stats come along with that, then that would be great.

Tell us about Verona’s road to the North Jersey Section 2, Group 1 Sectional title…

We were so lucky to have a very strong group of seniors last year, along with our amazing coach, Ryan Brown.  With the pandemic restrictions, it definitely created a tough season, however we were able to remain positive and come together as a team. We really tried to focus on doing well in serve receive so that we could run a fast offence on our side. We also worked really closely with our setters to be able to run efficient plays.

I look up to Penn State volleyball player Jonni Parker because she is so knowledgeable in the fundamentals of her own position and knows everything that is happening on the court. When I started playing right side on my club team, I really analyzed how she played because I think that she is a great player to learn something from. I attended a Penn State volleyball camp three years ago, and it was a really amazing experience to be able to watch her up close to learn from her.

I have been lucky to have two really strong coaches so far.  Coach Ryan Brown (VHS) and Coach Jeff Gogates (SOS) have given me so much knowledge about the sport. They have also helped to build my confidence and have taught me all of the fundamentals about volleyball. Most importantly, they have taught me how important it is to be a good teammate, and that a volleyball game is not won by one person. Informally, both Carly and Kelly Waterman have been true role models and mentors to me as players on the court.

I think that attitude 100% plays a huge role in winning. If you don’t have the right attitude on the court, it impacts your individual play and brings down the morale of the whole team.

My favorite place to compete at is the Capital Hill tournament in Washington D.C. There are so many teams there from so many places- it is always exciting when you first enter and see all of those courts set up!

When you go to lunch with your setter… volleyball is life! https://www.instagram.com/p/CT-ECcblyw4/?utm_medium=twitter

Nobody likes surprises. Please, please, please send us your tournament info if participating in one this weekend or in the future ok? Wait… did we say please? https://www.instagram.com/p/CT93-KaAbHT/?utm_medium=twitter

Which NJ high school volleyball players are in the top 100 in each stat category including per set stats? Find out at http://njpowerranking.com https://www.instagram.com/p/CT9ExNtLQ_H/?utm_medium=twitter

Girl’s blog is up at http://njpowerranking.com. Big Friday night of volleyball in NJ. https://www.instagram.com/p/CT8sNWSsMCM/?utm_medium=twitter

Update on NJ HS girls volleyball unbeaten list at http://njpowerranking.com. Which teams do you think will be on the list at the end of the month? Cast your vote! https://www.instagram.com/p/CT73kyEl0AM/?utm_medium=twitter

We take a look at some of our NJ high school girls volleyball super sophomores at http://njpowerranking.com. https://www.instagram.com/p/CT6LG6asTSL/?utm_medium=twitter