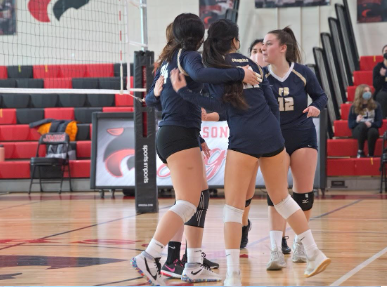 Audrey Sousa from Freehold Borough blasted on to the NJ high school volleyball scene as a freshman. She led the Colonials in kills in her initial year and is part of the youth movement that will carry over into the next few years for Freehold Borough. FB does lose half the varsity team to graduation but has a core of 5 returning players that will drive the team’s success.

In 10 games played, Audrey smashed a team leading 64 kills, had 2 blocks and 37 digs, and was also a standout on the service line powering 29 aces in the short season. The kill total ranked Audrey 7th in the class of 2024 in that category.

Audrey fit right into the outside role on the team. She has a smooth approach and a killer attack with a powerful swing that is difficult to block. She is strong upfront and has a solid vertical that will only improve over time. For a freshman, she showed confidence and brought a strong sense of calm that sends the message to her teammates that “we got this”.

Audrey loves the defensive side of the game and is gravitating to the back row. With her success as a freshman, she will likely continue to be an attacker for the Colonials this season, but it’s great to have her versatility on the squad.

Here is our interview with Ms. Sousa…

Hello Audrey? Thanks for joining the NJP player interview club. Tell us a bit about yourself?

Hi Gary! Thank you for having me. I am a rising Sophomore at Freehold Borough and graduate in 2024. I live in East Freehold with my parents Ji-Youn and Fred Sousa and my three older brothers, Andrew, Gregory, and Douglas.

I have played for about 10 years now. By the time I was 5 or 6, I had tried about half a dozen sports, but volleyball was where I really excelled and found my passion.

I stand at 5’7. My primary position is setting, but I have been learning the ropes of ‘libbing’ for hope of playing in college. I play at Warren Six Pack under Fred Siegle and have been coached by Bob Chen and Josh DeWitt over the past two seasons. I would say that Libero is one of my favorite positions to play. Over the past six months or so, my love for defense has definitely grown and made me a better player overall.

Tell us about your Colonial teammates. Who do you expect to be this year’s standout players in the Fall?

Some stand out players this year would be Jada Lao, Sophia Hor, and Juliana Esteban. Jada has a strong presence in the back row with her past libbing experience; she always steps up to a challenge and plays any position needed. Sophia is a strong passer as well as a powerful pin hitter; she is consistent through her hits and is always reliable to get passes to Juliana. Juliana Estaban is a huge presence on the court, always communicating, and bringing the team together through tough games; her sets are consistent and helps our team win matches.

NJP considers you as one of the top players in the state, especially for your class year. Do you plan on playing in college? If so, which ones are you looking at? What do you plan to study in college or what is your career path?

I would love the opportunity to play in college, with so many great programs it would be hard to narrow it down. I would play at any level that would give me a chance to complete. As of right now I hope to work with athletes one way or another. Physical Therapy is one of my favorite professions and I think it would be really rewarding to help people get back to what they love.

You led your team in kills in your first varsity year in the Spring high school season, finishing 7th among all freshmen. What are your goals for the remainder of your high school career at FB?

Some of my goals would be to really connect and build a team for the players that come in after me. I hope to improve and grow the program so more girls can enjoy the sport as much as I do.

Central A at the Shore seems wide open this Fall season with numerous teams having the potential to take league honors in a very competitive race. How do you expect the Colonials to fare against teams like Brick Memorial, Howell, Jackson Memorial, Brick Township, and Marlboro?

I think that if we truly buckle down on our defense, we have a very good chance to play competitively with the bigger teams. It will be a tough conference this year, but I do think we will have a chance at states.

Tell us about your club experience at Warren Six Pack?

Sixpack has been a huge influence on my volleyball career. The Head Club Director Fred Siegle is New Jersey’s Finest and has given me and his players countless opportunities to improve their game. The coaches are seasoned athletes that help their players every step of the way. The Sixpack environment can’t be beat and brings out the best in each and every player.

I think a good team captain helps the team push through tough matches and communicates with their players on and off the court.

Tell us about the coaches or mentors that have positively influenced your volleyball career.

Some coaches that have really brought the best out in me would be Bob Chen and Josh DeWitt. Bob was the one that really formally introduced me to beach volleyball. He let me play in his Long Branch league each summer and showed me the ropes of different kinds of tournaments and levels of play. Josh Dewitt has really shown me the world of college volleyball and the importance of a strong defense. He has opened my eyes to a different and more unique style of play that I’ve really enjoyed learning.

My Mom and Dad are huge motivators for me. My mom is always there for me, driving countless hours back and forth to practices, camps, and tryouts. My Dad is always putting my family first and does whatever he can to improve me, and my sibling’s lives.

My favorite place to play would be Atlantic City Invitational. I love playing in the casino and it’s always fun to watch the boys’ teams compete.

Who inspired you as a young athlete?

My brothers really inspired me from a young age. They are all competitive athletes that always put 110% into what they do.