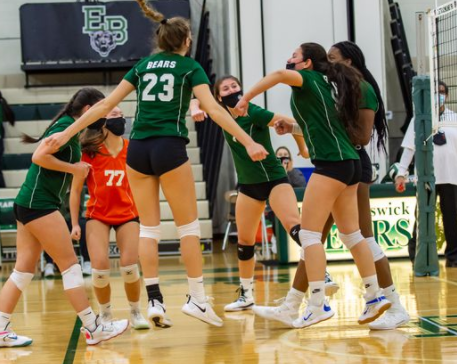 What an amazing season the East Brunswick girls high school volleyball team had in the Spring, tallying a 15-1 overall record, a state sectional title, and some stellar performances by many of its team members. The Bears were stacked at each position and despite losing some excellent players to graduation, will be solid once again and earn an NJP preseason ranking of #11 in New Jersey.

Senior Paige Anania returns from last year’s varsity squad for her senior season. Paige led the Bears in kills and digs in the Spring and is expected to be one of the power attackers in NJ as well as a leader on defense. She is projected by NJP to be in the top 20 in kills and is also projected to attain a double/triple having over 100 digs and 100 kills in the same season.

Many top NJ players have an advantage as an attacker, using their size and height to facilitate their kill attempts. At 5’5″, Paige uses perfect form and an outstanding vertical to put away kills like she’s 6 foot tall. When you combine her skill on the attack with such strong defensive digging, you have a 6-rotation standout player who will make their team better every time she takes the court. At the club level, Paige plays libero and hones her defensive skills during the off season from high school.

We expect Paige and fellow senior Hailey Benesz (94 kills, 88 digs, 30 aces) to drive extensive points for the Bears this fall. Both players will be teamed again with setter Isabella Sapienza creating the trilogy to build their 2021 team around. Hailey is one of the top beach volleyball players in NJ for her age.

With Paige as a driving force to be reckoned with, we expect East Brunswick to again be dominant in the GMAC this Fall, capture a Middlesex County title, and be in the hunt for top honors in their Sectional and beyond.

Here is our interview with Ms. Anania…

Hi Paige? Thanks for joining the NJP player interview club. Tell us a bit about yourself?

I grew up always watching my brother and sister be a part of some sort of athletic team (baseball and softball).  When high school started for both of them, they got into playing volleyball. Ever since I watched their first games I fell in love with the sport. Both played for Coach Portera, and I was fortunate enough to have him as a coach as well throughout my entire high school career. I was in grade 4 when I started, and I’ve been playing it ever since.  I even dabbled in a little competitive beach volleyball.

I am 5 foot 5 inches tall. Although I play the position of an all-around outside hitter in my high school, I have played Libero on my Princeton Volleyball club for the past few years. I love that I am able to play both positions to keep myself well rounded in the game. You learn to appreciate all the players and their positions because you know what it takes. I have been playing with Princeton Volleyball since I was 13. Before that I was on Helios which was our local volleyball club in East Brunswick, which is where my teammate Hailey and I first met.

Tell us about your Bear teammates. Who do you expect to be this year’s standout players in the Fall?

There are 4 returning seniors including me, with 8 players that moved up and earned themselves a spot on the varsity level.  Practices with these new group of girls are exciting. I’m hoping WE ALL standout on the court this season – That would make for one amazing team.

It has always been my dream to play in college. But academics are my main priority. Depending on my choice of major will determine if I can continue my love for volleyball on the court at a top level in college or at a club level. I am open to either.

You have a great nucleus of returning senior varsity players that will drive the Bears success in Fall 2021 including yourself (106 kills, 103 digs, 27 aces), Hailey Benesz (94 kills, 88 digs, 30 aces), and Ysabella Sapienza (156 assists, 24 kills, 79 digs, 24 aces). Tell us about these two teammates and how the trilogy of leaders will approach the new season?

I am very happy to be able to continue playing with these 2 exceptionally talented girls. All three of us have become very close on the court. We have trust and faith in each of our abilities. The three of us are setting a good example to the younger players to show how teamwork and unity can really impact a game as well as the season.

The Bears loses 4 of 9 varsity players to graduation including top players middle Anaya Prince, libero Megan Lee, setter Laurel Sheard, and opposite Melissa Chinchar.  Where do you see the team finishing in the upcoming season?

The graduating seniors of last year will strongly be missed. I had a very strong bond with most of the girls because they are who I started out at Helios with, we were friends on and off the court.  But I am quite confident that the new players will step up and fill their shoes.

Tell us about your club experience at Princeton VBC…

I started playing for Princeton Volleyball Club at the age of 13 on their 13 National Team. I started out as an all-around outside hitter, but due to my height and my energetic drive in the back row, my coaches asked if I’d be willing to switch positions to play Libero. I was excited to take this new position. I have been playing Libero since 16U.

I think attitude is a factor in winning a game because attitude is a very contagious element that affects all team members on a court or field. I believe one should always have a positive attitude/mindset on the court, because it can not only affect you mentally but your play physically. From past experiences I have been able to see that a good attitude brings out a positive outcome.

The toughest team I feel East Brunswick has played against in the past has been J.P. Stevens.  We tend to go back and forth in wins and losses against each other.  J.P. Stevens has managed to beat us out on the GMC title a few years in a row while EB tends to knock them out of the States.  This year we are striving to earn the GMC Championship Title.

One of my best memories of my junior year was winning the Group 4 state sectional championship. That truly was a season with full team effort. Everyone brought an aspect to the court which took us to the top.