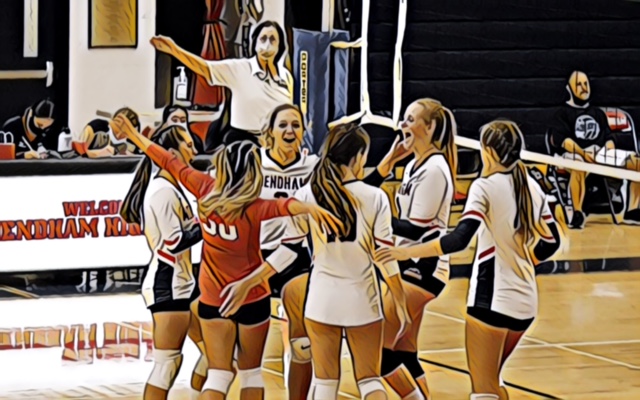 Last night, there was 83 teams that remained unbeaten out of well over 300 NJ high school teams. We expect that number to drop in half every couple of days until there are just a handful of teams remaining in their quest for a perfect season. We will keep you posted… https://njpowerranking.com/2021/09/15/83-teams-remain-unbeaten-after-week-1-of-nj-high-school-girls-volleyball/

Senior Ana Trzesniowski broke out today with the best game of her high school career leading Mendham to a straight set win over Mount Olive in the NJAC. Ana delivered 9 kills, 4 digs, a block, and a dig in a super performance for the Minutemaids. Katie Webber had 12 assists and three digs and Annibelle Ernst and Marissa Manuel posted 4 kills each. Mendham is now 2-1 as the Maruaders fell to 2-2.

As expected, the Hudson County landscape became a bit clearer today as the two top teams battled at Jersey City. We have been touting that Union City is a real threat to the long standing dominance of Hudson Catholic. The Hawks prevailed in straight sets put were pushed by the Soaring Eagles to extra time in the second set. This is a much closer pairing compared to the Spring team matchups. The duo of Nathaly Flores and Mathilde Karskens give UC a real chance when tournament time comes a long. Hudson Catholic remains a powerhouse and is well expected to be a top 20 team all season powered by Kiannisha Santiago and new energy infused by former Hawk and new head Coach Katria Stewart. Hudson is now 4-0 and Union City falls from the unbeaten ranks at 3-1.

Leah Mackey and company proved to be too strong for Morris Hills as Morris Knolls cruises to a straight set victory today at home. Mackey had another monster game with 9 kills, 11 digs, a block and two aces. Maya Frommelt also was solid as she put down 3 kills, a block, an ace, and 10 digs. Knolls remains unbeaten at 3-0.

New Brunswick took the first set from undefeated St. Thomas Aquinas and then Olivia Alicante took over for the Trojans. Alicante was a wrecking crew, tallying 18 kills, giving her 44 on the young season already. Considering she is just a sophomore, this is an amazing accomplishment. The Trojans are now 5-0.

Interesting match in Wallington today as the Panthers hosted Bergen Charter. The Yellow Jackets got their first win as both teams battled to a 27-25 third set after splitting sets one and two. We will see if Bergen Charter can keep the momentum going tomorrow at home vs. Cliffside Park.

How awesome for Northern Highlands senior Ruby van der Heide to have her little sister Delia on the Highlanders squad this season. We love seeing situations like this that can create such magical moments for siblings and special times to remember forever. It doesn’t hurt when the older sister is one of the best players in the state as well. Ruby is sharing setting duties as a senior after posting some remarkable numbers the past two seasons. Both Highlands and Valley are strong contenders for conference and sectional titles but NH got the upper hand in this one with 6 team members with 2 kills or more. Highlands also posted 9 aces for the match. NH is now 2-0 and Pascack Valley took their first loss of the season.

Super close match between Madison who finished second in their host tournament this past weekend, and Morris Catholic who participated at the Jersey Classic in Paramus this past Saturday. Madison prevailed in the 3 set match and improved to 3-0 while the Crusaders dropped from the unbeaten ranks and is now 1-1. Fiona North… where are you?

Kent Place has now accomplished a 5-0 start to their season as they put away Union handily in straight sets. Iman Handy with 7 kills, 5 aces, a block and 4 digs. Skyers, Osuala, and Morial were dominant as usual. Kent Place is clearly the team to beat in the UCC.

Don’t look now but the Hoboken Redwings are 3-0 after disposing of St. Dominic today in Hoboken. A freshman infusion of twins Madison and Morgan Walia-Peters has raised the game up of the HCIAL competitor. Both players were playing club volleyball for Brooklyn Elite in NYC and a bit off of our radar. The Redwings now have more wins after three games than they have had the last two seasons.

Mother Seton, driven by junior setter Liahnna Orange, is now 3-0 in the GMC as they earned a lopsided victory over Wardlaw-Hartridge. Orange crushed 9 aces as well as 7 assists, 4 digs, and a kill. Maya Brown had 10 digs and Ashlie Jordan, Emily Martinez, and Christina Martinez each had 2 kills.

Hackettstown was dealt their first loss of the season as the Vernon Vikings improved to 4-0 with a straight set win. Big contributions from Colleen Fraser with 13 kills, Lexi Vizzini with 20 assists, and Lexi Moskovitz with 10 digs and 4 kills. Vernon will face undefeated Jefferson next in what should be a really competitive game to watch in the NJAC.

Cayley Morrison slammed 8 kills and Giany Puero had 16 digs as Elizabeth took down SPF in straight sets. SPF has fallen back now that the Adelina Berisha era is over and is now 1-3.

Lyndhurst rises to 4-0 with a straight set win over Waldwick with another 9 kills from Steph Mizeski. Cherry Hill East demolished Winslow giving up just 11 points in their match, and moved to 4-1 on the season. Vianney ran over Red Bank Regional with Erin Gretzky getting 8 kills and Mackenzie Bloss adding 13 assists. Florence used 12 aces to fend off Pennsauken and remain unbeaten at 2-0. Wayne Hills is now 3-1 after running past Hawthorne today with Jenny Choi getting 6 kills and Arianna Wood adding 5. Lindsey Mills had 8 kills and the Colts put down 13 aces as Kinnelon get on the win board this season in a straight set win over Parsippany that had the second set go 33-31. Roxbury and Sparta kept pace with each other as both won in straight sets today.

Hungry? Get fed all the volleyball articles you can handle at https://njpowerranking.com/the-feed/