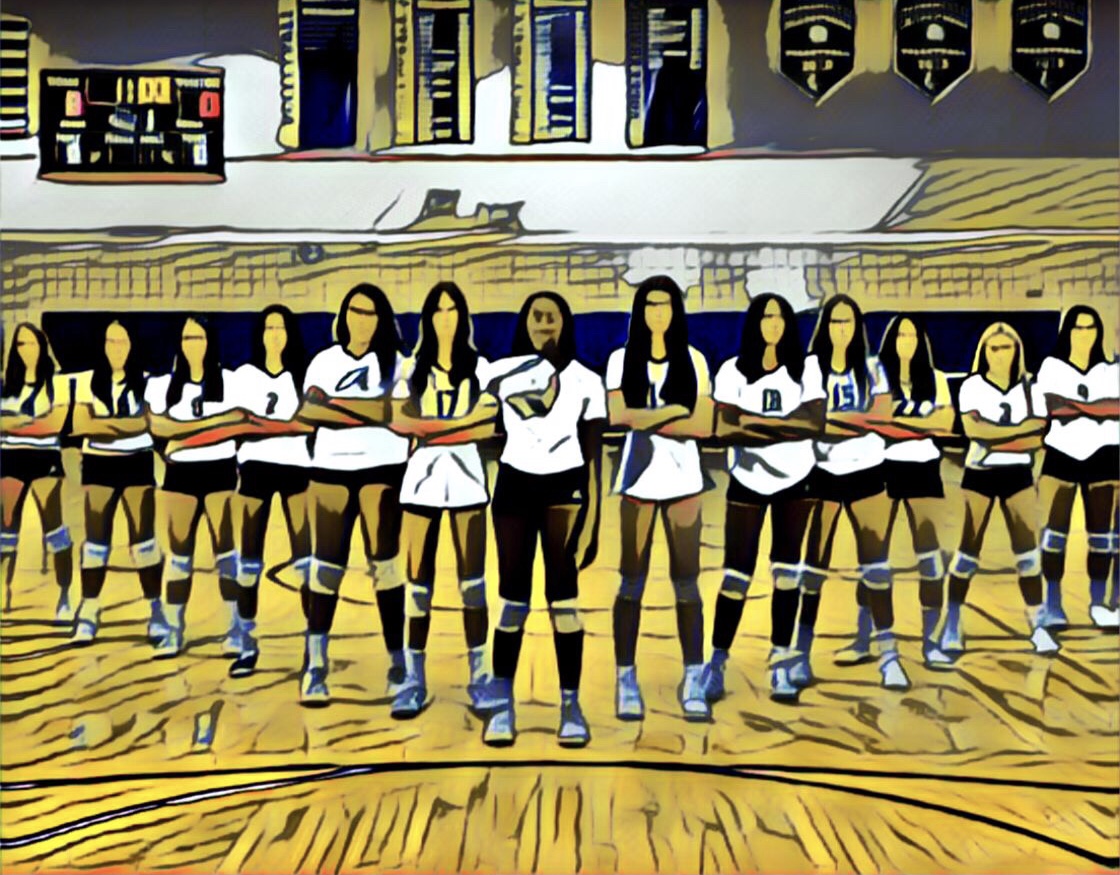 Well, that didn’t take long. We started our lock of the night selections just a week ago and we have already been busted. After 10 straight wins, the Barron’s of Woodbridge surprised previously unbeaten Mother Seton and left the NJP predictor red in the face. We are living in a world of volleyball shame…

As we collect ourselves and give the Barron’s their much deserved kudos, we will shift to focus on tonight’s inner look on a somewhat lighter schedule…

The Hoboken Redwings are now 4-0 and becoming NJ’s team to root for… it’s all starting to make sense now as we did our research. This high school photo of Frank Sinatra sends a message to the Redwings team that their roots in volleyball success are long standing. The lights are on at 415 Monroe Street… Go Redwings!

For Hoboken, the freshman twins were like gravy on spaghetti covering the floor like a blanket of calzone. Morgan Walia-Peters had 5 kills and16 digs and her sister Madison had 13 assists and 3 aces. Madison set Sophia Boyajian and Emily Jacobelli, and bada bing bada boom, they had 4 kills each. Kayla Zegarra deserves a cannoli after putting up three kills, 9 digs and six aces. Fugetaboutit. https://www.youtube.com/watch?v=-3pKAOATzeg

Pinelands used 12 different players on the floor to outlast Barnegat in three sets. Barnegat won the first set 25-16 and it appeared they were well on their way to their 5th victory. But Pinelands fought back winning the second set 25-23 and taking set three, 25-20. Caitlyn Downes had 19 digs and 4 aces and Jayne Wilkinson had 7 kills and 2 blocks. Olivia Benson put on a show with 8 kills and 12 digs and Molly Quigley-Sanborn and Bailey Lawrence combined for 27 assists as the Wildcats improved to 3-1.

Williamstown knocked off Gloucester Tech today taking one more team from the undefeated ranks. Melissa Anacious had 6 kills and 2 blocks and Julia Schwab had 5 kills and 11 digs for the Braves. Dubtown also had some nice efforts from Mia Owens with 11 digs, Dajah Williams with 6 kills and a block, and Joanna Andrews with 18 assists, 2 kills and 4 digs. Williamstown is set to face St. John Vianney on Saturday which will help shape the NJP top 20 due out on Sunday. Kyla Sayson of GCIT got her 1,000th assist for her career in the game. Congrats Kyla!!

We are starting to sound like a broken record with Union City winning, Nathaly Flores having a big night with multi-digit kills and Scarlett Torres with a bundle of assists. In 5 games, Nathaly has 11 kills in 4 of them and 12 in the other. She is a model of consistency and is near the top of the state in kills. UC rebounded nicely from their close loss to Hudson Catholic with an overwhelming win over a solid Harrison squad.

Clearview slammed 18 aces and Alexandra Neumann had 5 kills as the Pioneers smoked past Triton to improve to 3-1.

Ashanna Caviness blistered 14 kills and Gyanna Hernandez added 8 as Bogota eased past Secaucus in an NJIC matchup. Mia Pimentel had 20 helpers for the Buccaneers.

Recognizing an outstanding performance today by Elizabeth’s Giany Puero. The scrappy libero would not let any balls drop as she lifted 33 digs for the match as Elizabeth outlasted North Bergen in three sets. Alex Koon and Jessebell Lara had 6 kills each for Elizabeth who improved to 3-3.

Central Regional evened their record at 3-3 as they took down Brick Township in a shore battle. Madison Lenox had 10 kills and Jenna CzaJkowski had 7 kills and 5 aces for the winners. Lyndhurst improved to 5-0 as Maria Hantzaras smoked 8 aces and a kill in their straight set victory over West Caldwell Tech. Passaic Valley is now 2-0 with a strong victory over Belleville.

South Plainfield is now 5-1 driven by 5 aces from Madison Szalanczi. Jeannie Castro had 6 aces and Esther Babatunde had 7 kills as Linden improved to 3-2 with a win over Oak Knolls. Ferris is now 2-1 after taking a three set victory from Kearny today. Princess Sison has been a demon on the back row for the Bulldogs. Delaware Valley moved to 5-0 for the Fall with a close straight set victory over Phillipsburg. Nine aces from Daliana Melendez sparked Barringer to a big win over Lincoln. The Blue Bears are now 4-1.

We love it when players or teams show leadership and fight for a worthy cause. We want to share and support this post from the WWPS Girl’s Volleyball Team. Equip-A-Kid is a trusted 5013c Non-Profit that has made a difference for millions of kids in need. Well done Girls!!! Please help if you can… the gofund.me link is below.