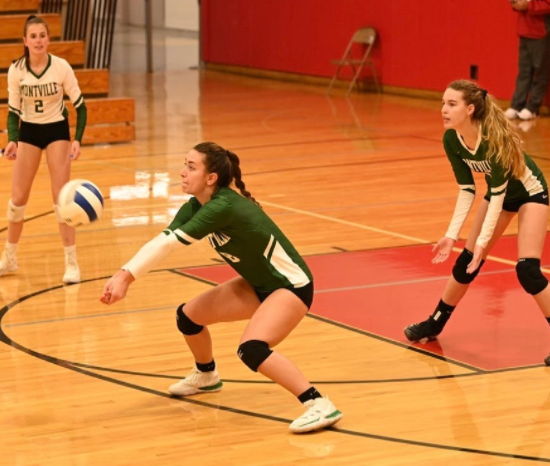 The Montville Mustangs are one of the up-and-coming teams in the NJAC, and Sofia Fernandez is a huge piece to the success for the Mustangs this season.

I sat down with the senior captain for the Montville Mustangs to get her insight as to what we can expect for the second half of the season from the Mustangs.

For Fernandez, it all started in 8th grade, and she really played competitively when she started high school.

She said, “I quit softball when I was young to take up a faster paced game, so I tried volleyball and haven’t turned back since.”

Sofia stands 5’9” and can really get up to hit the volleyball, owning an approach-touch of 9’6”.

“I play as an outside-hitter at Allegro Volleyball Club. Throughout my volleyball career I’ve played as a libero and outside, but I can definitely say that outside is where I am most comfortable,” Fernandez added, “I love both aspects of passing and hitting/blocking and playing on the outside gives me the best of both worlds.”

With regard to Montville High School volleyball, Sofia Fernandez is very upbeat and excited to see how the team develops.

“I believe we have something special this year, but we do have a very young team that we need to develop first,” the Mustang volleyball captain said, “Last year we had 9 seniors graduate and now we only have two returning varsity starters, myself and junior Michela Voit.”

The key for the Mustangs is trust in both the coaches and the other supporting players. Fernandez mentioned that early on, the team has experienced some ‘moments of greatness’ and she is ready to take on the rest of their schedule. Sofia is “super excited for a potential run at counties this year, which is the goal.”

Montville has a balanced roster this season, which includes players with all different levels of experience.

Fernandez said, “Eliana Rothenbuhler was a huge player for us coming off the bench last season and she brings lots of consistency and energy to our team. She has been waiting for her chance to get a starting outside spot and now that she has one, she’s going to be a huge playmaker for us.”

You can’t hit the volleyball without a reliable setter, though.

“Michela Voit, who is arguably the best setter to come through Montville High School, has taken a huge role in leading the team even though she is only a junior,” Sofia Fernandez said.

She also added, “Another player that isn’t well known yet, but definitely will be soon is junior middle-blocker Katie Gorski. She has a great swing and a big block which definitely will help us establish a big threat in the middle.

Fernandez noted that Rothenbuhler, Voit and Gorski have all stepped up and made positive contributions to the team this season.

Sofia Fernandez leads the Mustangs in kills (65), blocks (8) and service aces (12), while sitting just 5 digs off the team lead as well. The senior is excited that Montville has many hitting options to go to, which will make the Mustangs a much harder team to defend against.

“Ever since I have been at Montville, we have never lacked consistent setters. From Colleen Kelly, to Henna Kim, to now Michela Voit, all three of them have made it possible for us to run a fast paced offense the past 3 years,” Fernandez added, “What I am excited for the most this year is that we have hitting threats all across the net and in the back row as well so we can prevent blockers from pinning on certain hitters. In the past, we used to rely heavily on a player or two but this year I believe we have a pretty balanced team.”

The free-swinging senior outside-hitter has a great trifecta of coaches at Montville. In addition to coaches Migliore and Van Horn, head coach Angelica Maiello is very highly-touted throughout the Montville volleyball program.

“I’ve had Coach Maiello for my freshman, sophomore, and now senior year so we have developed a strong relationship and I’m so excited to have her back,” Sofia Fernandez mentioned, “Last year when Coach Migs stepped up and coached varsity for my junior season, it was a tough adjustment but she led us to a successful season. She made me a much more consistent and smart player in a short few months and I owe a lot of the success I have been having this season to her.”

Last season, Fernandez faced some really tough competition, but Chatham seemed to be the team that really stood out when it came to causing havoc against the Mustangs.

“They [Chatham]  had some great girls on both the offensive and defensive ends of the game which challenged us. However, what made playing Chatham the most fun is that I get to play against my club teammates Ava Nesci and Emma Garlick—both great players and good friends of mine and a little friendly competition is always good,” the Montville senior said.

Montville had some great leaders last season, and they were really valuable to Sofia Fernandez and her development as a leader on the volleyball court.

She said, “Playing volleyball at Montville brought me one of the best people I know and I wish I could have played another year with her. Abby Lisi graduated last year and was a libero for us for 4 years and I have been playing alongside her on varsity since my freshman year,” Fernandez continued, “Throughout all the time we played together she would always reassure me it’s okay to make mistakes and to always just have fun because that’s when we play our best. She is the best libero I have ever played with and always challenged me to get better every day.”

Speaking about getting better every day, Fernandez sees some similarities between her and a pro-volleyball player—Kathryn Plummer.

“She [Plummer] is a power hitter like myself, but she is the best volleyball player I have ever seen. She is so entertaining to watch considering she is a 6’6” outside with a heavy arm yet, she moves so well on defense and passes great on serve receive,” Sofia said.

Fernandez found her love for volleyball later than some other players, but still wants to try to play volleyball when she begins college next school year. She mentioned that she would entertain joining a team as a walk-on and study biomedical engineering.

When you put all that information together, you get a really intelligent student athlete. Sofia Fernandez definitely will be a force to be reckoned with this season, and the Montville Mustangs are sure happy to have the senior as one of their captains for the 2021 fall season.