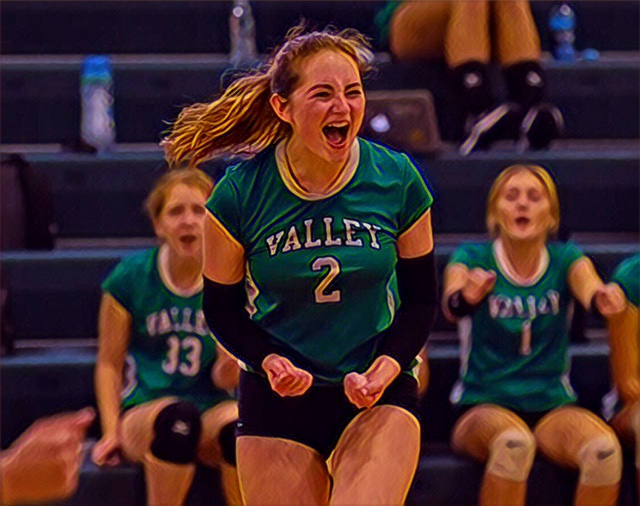 As every game of the NJ high school girl’s volleyball season goes by, we get deeper data, knowledge, and insights on what the final playoff potential is for school teams throughout the state. But remember, the game is not about stats or data. Any team can beat another on any given day… one of our favorite vids (yes it’s like 12 years old) that captures the essence of this concept is at this link… worth 2 minutes of your time and let us know if you agree…

A big surprise tonight as one of the hottest teams in NJ high school volleyball falls from the unbeaten ranks. Sparta ran into Wayne Valley tonight and could not get the Spartan attack firing as the Indians took straight sets from Sparta 25-17, 25-21. WV stepped up and got some great performances form a number of players on their squad. Nicole Antonio was a demon on defense hoisting 10 digs. Isabelle Borowinski led the attack walloping 9 kills and an ace. Jen Haworth also stepped up and logged 5 kills, a block and an ace. Wayne Valley has a big game with undefeated Clifton on Friday. Sparta will need to regroup as they also have a big game Friday when the Spartans travel to Mendham.

What a smart move by Paul VI Coach Dan Chung by scheduling a game with Delaware’s #1 team Padua Academy. It was a great exhibition for the Eagles as they pushed Padua to 5 sets, clearly indicating their strength this season. Paul VI only has one loss this Fall as they dropped a three set thriller to North Hunterdon in the first week of the season.

Mendham dropped Jefferson in straight sets. Katie Webber and Sarah Wilcock shared the wealth as they posted 23 assists between the two of them and spread the attack. Annibelle Ernst, Poppy Skjonnemand, and Sarah Wilcock had 6 kills each and Ana Trzesniowski added 5. Mendham will now gear up for their next match against Sparta later this week. Jefferson drops to 9-2.

Montclair Kimberley Academy remained unbeaten tonight as they slipped past Verona in three sets. Verona fought back to win the second set convincingly 25-13, but MKA got their momentum back and closed out the match 25-18. A dominant game from Hailey Fouche as she cracked 12 kills and 3 blocks in the match while posting 9 digs. Samiyah Abdur Rahim had 9 kills and 4 aces while showing off her defensive skills with 14 digs. Setter Amara Lerner had an excellent evening as well posting 20 assists, 10 digs, and 2 aces. MKA looks to be the best team right now in the SEC.

Southern, who started the season 2-5, has regained their form and won 6 games in a row including a big one tonight against undefeated Toms River East. Hailey Krause bashed 9 kills, 4 aces and a block while lifting 7 digs in a great all-around performance. Jordyn Hamlin also stepped up and slugged 5 kills and 2 blocks for the Rams. TRE received 6 kills and 9 digs from both Claudia Cosme and Rebecca Keith bit was not enough to secure the win.

Really exciting SEC clash today as Newark Tech took on Payne Tech. Newark Tech had the advantage coming into the match in the standings but it was Payne Tech coming away with the hard fought victory with the Lions taking set three, 26-24. Recognizing a number of great performances from Lion teammates tonight… Jacqueline Rosario had 11 assists, 4 kills, 5 aces, and 6 digs. Alanis Jiminez uplifted 11 digs and cracked 2 aces while Jaylene Nivar struck for 5 kills, 2 aces, and 11 digs. Payne Tech improved to 6-5 while Newark Tech dropped to 5-3.

Rutherford has quietly risen to 11-0 and remain under the radar in the state rankings. Tonight they slipped by Hawthorne in a close two set match. A big night for Harmony Marquez who blasted 7 kills and a block. Rutherford won the game by using defense as they out dug Hawthorne 23-8. Saturday the will host St. Mary’s Rutherford in a battle of unbeaten teams. Might be a good idea to use Giants Stadium as everyone is going to want to see this match-up.

Kinnelon posted their 7th win a row today as they inched past Morristown in three sets. The Colonials are still reeling from losing star player Brooke Atkins to a knee injury as we await on a determination on her season. But MoTown, and the three other Atkins sisters, played hard to the end but fell just short. Lindsey Millis led the Colts with 8 kills and also added 8 digs and an ace. Sophie Pogodin had 5 kills and a block for the Colts who improved to 7-3.

Ashanna Caviness of Bogota has had a truly amazing year thus far. They matched-up against Midland Park today and we thought if their is anyone in NJ that can stop the Caviness train that is rolling right now it could be Paige Tuozzo. But again Ashanna proved to be too much for her opponents to handle as she steamrolled another 18 kills in the 2 sets. Tuozzo posted 8 kills and 2 blocks in a fiery effort, especially in the second set that finished at 31-29. Mia Pimental had 30 assists for the winners and Jessica Balala led all players with 14 digs for Midland Park.

Two strong SEC teams faced-off today as MSDA traveled to Livingston. The Lancers, and setter Bella Ubrig, orchestrated an evenly balanced offensive attack with Norah Shaji getting 11 kills and Anika Dhar and Erica Wang getting 9 and 5 kills respectively. Livingston was able to expose the more one-dimensional attack of MSDA which relies on Bridget Lonergan to drive their attack. Bridget was outstanding with 10 kills and 4 blocks but the Lancers (now 8-1) were too deep for the Lady Lions today.

Lots of stats and analysis posted with the player rater, player report cards, team rankings and team standings updated this Sunday. Why not take a spin around some of the recent posts and get caught up on all the features that NJP has to offer on covering NJ high school volleyball in NJ.