No. 11 Mendham Comes Out Swinging, Takes Down No. 8 Sparta 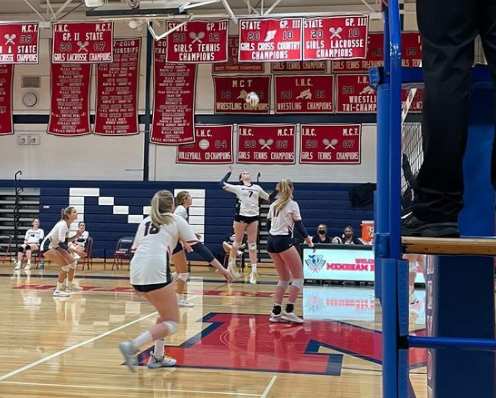 This season has been a crazy one, for sure. Take into account that the NJAC American is the most stacked division in the league, you know that there are going to be a lot of big-time swingers trying to make their mark in this Fall 2021 season.

Last Friday, the 11th-ranked Mendham Minutewomen came out on fire and took down the 8th-ranked Sparta Spartans in straight sets (25-10, 25-20).

In the first set, Sparta drew first blood and grabbed a 2-0 lead. That lead, however, was quickly erased thanks to a 9-1 tear by Mendham.

Mendham head coach Greg Racz mentioned that the passing has greatly improved, which as given the Minutewomen a lot more in-system opportunities to run their offense.

After a Sparta timeout, Brynn McCurry got the Spartans back on the board with a kill, but the Minutewomen blew the doors off with a 11-1 run sandwiching a Sparta timeout. Mendham ran away with the first set 25-10.

“We kept the energy high the entire time,” Mendham senior Annibelle Ernst said, “Even if we messed up, the energy was still there.”

Set number two was a different story, with both teams seemingly trading points early on. Sparta held an 8-7 lead which was quickly flipped after a 5-0 run.

The hitters for Mendham have made it really difficult on defenses, especially of late, as they have 4 very strong free-swinging hitters. Poppy Skjonnemond, Annibelle Ernst, Ania Trzesniowski and Sarah Wilcock have all kept teams guessing and have spread the ball out very well on the offensive end.

Mendham led 18-12 as it inched closer to crunch-time when Sparta ran off 3 consecutive points, capped off by back-to-back blocks by Sparta sophomore middle-hitter Emily Smernoff.

The Minutewomen were able to hold off the Spartans late comeback attempt and took the second set 25-20.

Mendham will also be participating in the Morris County Tournament in the next couple of weeks, which should be an interesting dog fight to the very end.

“I feel that if we play as we did today, we can take down anyone,” Ernst said.