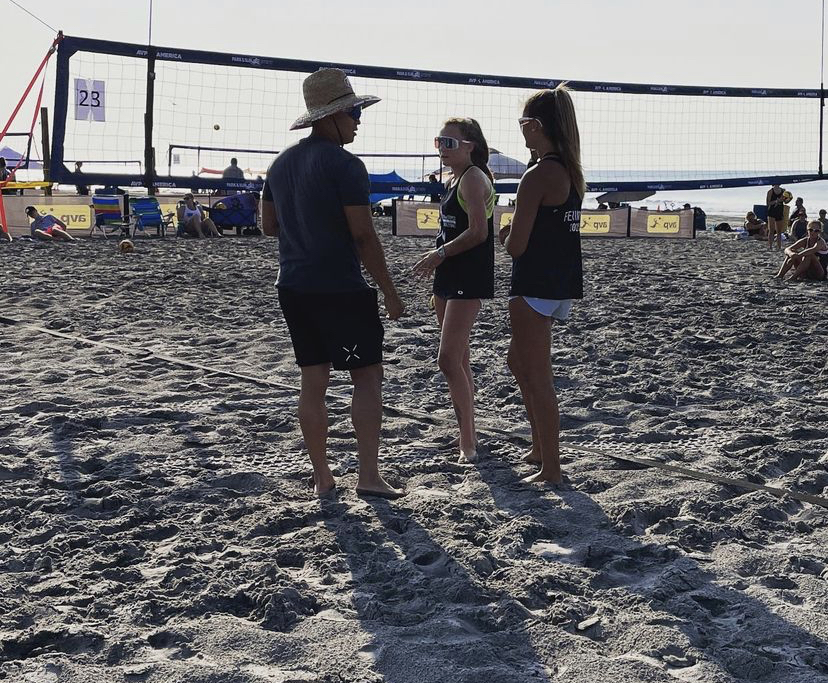 The Warriors of Manasquan entered their third year of existence this Fall on the girl’s varsity high school volleyball front. Like most new varsity teams in New Jersey, it takes time before the wins start coming. And sometimes it takes a talented player or two to matriculate before the programs kicks up and starts to become a winning tradition.

Squan has won just two games in their three season history, but we are starting to see the writing on the wall that good things are coming for the Blue Warriors. Enter Giuliana Ferraro… The freshman has been a beach player for a few years and has hit the ground running in her initial season. Giuliana is one of those impact freshman that only comes along once in a decade or two.

So far this Fall, Giuliana leads the team in almost every statistical category. She is second in her freshman class in total blocks with 23. She has put up 55 kills and 19 aces. And she also has lifted 37 digs. She has been the full package for a Manasquan team that has welcomed her presence.

The Warriors are a very young team. All of their starters on varsity will be returning next season. They have two solid sophomore starters on varsity, Campbell Krapp and Elena Weinseimer. This trilogy will fire the teams success over the next 2 years, and with any luck, will draw much more student athletes into the program.

Giuliana aspires to play beach volleyball at the collegiate level. We will see if she can follow in the footsteps of other SAS players like Kate Stoughton of Brick Memorial or Sidney Eckhardt from Hunterdon Central.

Here is our interview with Ms. Ferraro,,,

How are you, Giuliana? Thanks for joining the NJP player interview club. Tell us a bit about yourself…

Hi! I’m Giuliana Ferraro I am from Manasquan, NJ, and I attend Manasquan High School. I am currently a freshman and so far I am loving high school. I am starting to get involved in clubs and am currently playing for the Manasquan Varsity Volleyball team. I have a very supportive family of 5, my Mom and Dad support me and my 2 older brothers at all our activities. My oldest brother, Nikolas Ferraro, played volleyball for Donovan Catholic, and my other brother, Vincent Ferraro, plays ice hockey for the Manasquan hockey team.

I’ve been playing volleyball for about 3 years. My brother Nikolas Ferraro inspired me to try volleyball because of his outstanding achievements at Donovan. My first year getting into the sport I played for OCVBC and learned the basics but then that summer I tried out for Stars and Stripes beach volleyball club. When I made the team I ohhh instantly fell in the love with the sport and people around it.

I am 5”9 and I am loving playing the middle position for my high school volleyball team. The feeling of getting a block or a kill is the best feeling. For beach I am a split blocker and same goes for that I love the feeling of celebrating those kills and blocks.

Tell us about your Warriors teammates. Who do you expect to be this year’s standout players during this season?

Coming in as the only freshman, and being on a new team, was a little nerve racking. But the Warrior girls are the most welcoming people. I call them my family. With the season half over, I’ve recognized that we have several upperclassmen that will make a difference in the program for next couple of years. I want to recognize the hard work from my fellow friends and teammates Campbell Krapp, Elena Weinseimer, and Mia Petri, inspiring me with all the positivity and hard work towards the team’s goals.

NJP considers you as one of the top players in the state, especially for your class year. Do you plan on playing in college? If so, which are your dream schools? What do you plan to study in college or what is your career path?

I hope to play beach volleyball in college and go to a school either on the West Coast or in the South. Being a freshman, I’m not so sure on what I would like to study but as of right now.

Your presence on Manasquan sets the tone for the future as far as volleyball goes. What would you like to accomplish over these next 4 years?

I would like to help establish a solid foundation for the Warriors Volleyball team, growing in talent and participation in each of my high school years. Hopefully winning a division title by my senior year.

Tell us about your experience playing beach volleyball for SAS?

SAS has made me to the player and person I am today. They taught me how to be a supportive and great teammate and push me to the best of my abilities. They placed me around role models that have made a huge impact on my life and game.

A big motivation in my life is my family and especially my older brother Nikolas. I grew up watching and supporting my brother achieve his goals of winning and breaking records during his high school career. Culminating in his selection to the First Team All Shore which inspires me to achieve the same success and more.

Every single one of my SAS coaches have positively influenced my game. They always push me to be the best partner and player I can be. They never let me give up whatsoever, without them I wouldn’t be playing at the level I do today.

Tell us about your experience playing beach volleyball?

My experience with beach volleyball has changed my life for the better. Ever since I have started I’ve met so many amazing people, while doing the sport I love. I get to travel and play with my friends.

Victoria and Veronica Corcoran are athletes I can always look up to and definitely people I can call my role models. They are the sweetest people on and off the court and always have a smile on their face. Not only that they are studs at the sport. Both have taught me so much.