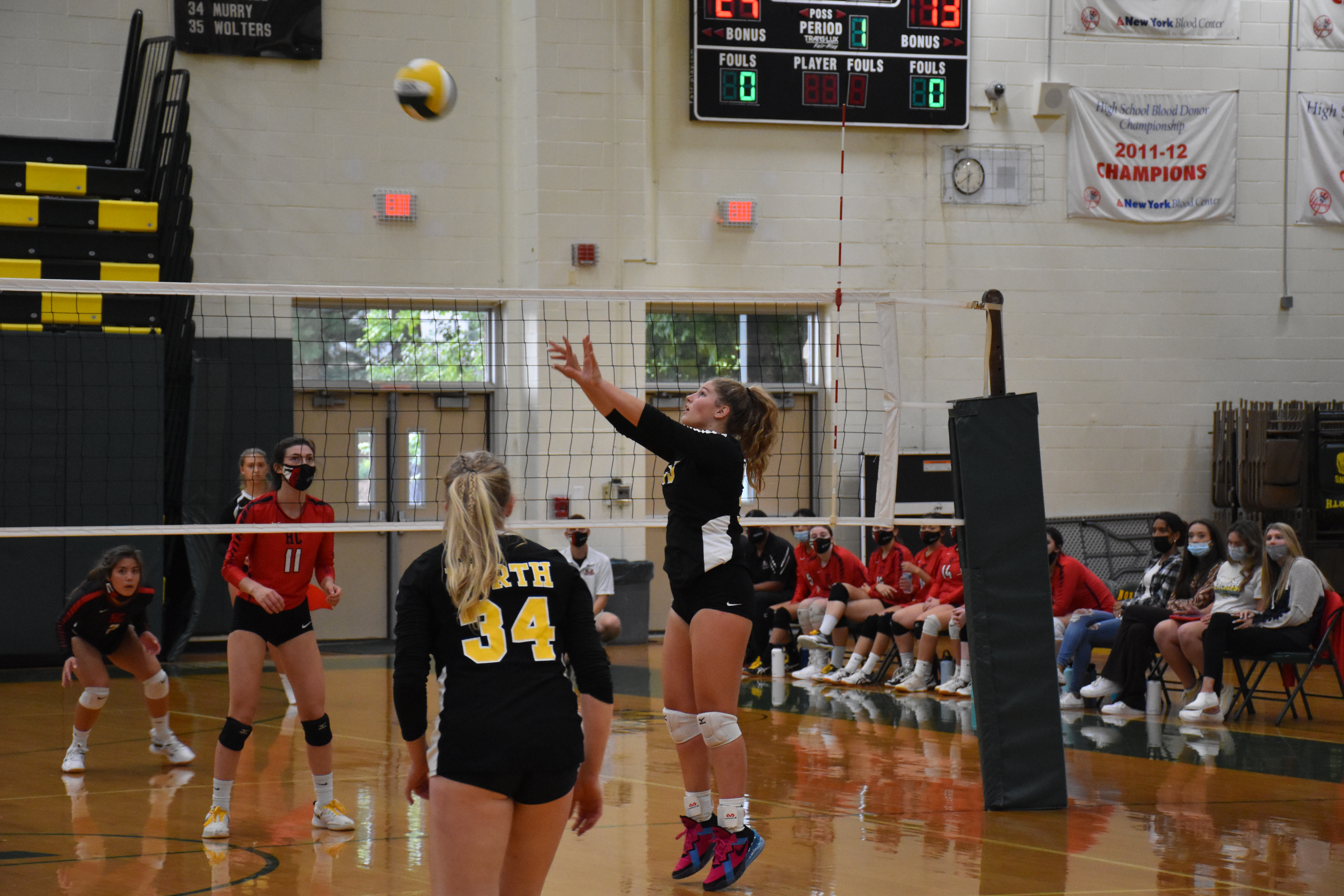 Emily Wolters has been one of the best setters in the game on the New Jersey girl’s high school volleyball landscape this Fall. The North Hunterdon Lion is thriving in her senior season on a team that has just one loss in 18 attempts. North Hunterdon is a powerhouse that will most likely be a #1 seed in the Central Sectional state tournament.

Speaking of powerhouse’s, Emily has been such an amazing contributor this season to North Hunterdon’s success. She has provided a high level of leadership on a team that has looked unstoppable for the large majority of the season. The Lions have been a wrecking crew when facing teams in the Skyland conference and have knocked off some of the best South Jersey teams as well by defeating Southern, Paul VI, Cherry Hill East and Cherokee as well as North Jersey teams such as West Morris Central and Westfield. Their only loss came to #3 Williamstown who remains undefeated at 21-0.

Emily has been in the top 10 in assists all season long as well as in the top 10 in our NJP Overall Player Rater. She contributes in all phases of the game as evidenced by her stat line. Emily already has over 300 assists for the season and has managed to put up 118 digs, 10 blocks, 48 kills and 32 aces to join with that stat.

She is a master at spreading her offense to multiple weapons and may end up with 5 attackers this season with over 100 kills each. Her favorite target to set is senior Tori Kuo, but she involves fellow senior Elise Oertel as well as juniors Colleen Russell, Emma Murray, and Brooke Logar as part of the powerful offensive artillery of the Lions attack.

Emily currently leads the Lions with 32 aces and has almost double the service points than any other team member. She is second on the team in blocks and digs and is strong solidified as the foundation of the Lions strategy. The shift to a 6-1 scheme further indicates the reliance on Emily as a leader and a sparkplug for this team.

Emily and the Lions will be a major force in the state tournament grid in a Central sectional that right now they are a very clear and dominant leader.

Here is our interview with Ms. Wolters…

How are you, Emily?

Thanks for joining the NJP player interview club. Tell us a bit about yourself?

I go to North Hunterdon High School and am currently a senior there. I am graduating in the spring of 2022. I live in Clinton (with my mom) and Lebanon (with my dad) New Jersey. I have two older sisters, Katelyn (19) and Jackie (20) and I have a mom and dad and a step dad. Both my sisters are away at college so as of now I’m an “only child”.

I would say that my oldest sister and my mom inspired me to play. When I was on a basketball team in sixth grade, it got cancelled early in the season and my sister gave me the idea to try out for volleyball. I have been playing for 7 years and have also played club volleyball for 6 years. My mom played volleyball in high school and in the GEVA Women’s Club so she had always wanted me to play, and was a setter and wanted me to be one as well.

I’m 5’10” and I am a setter. I played at CJVA for club volleyball all 6 years I have played. My entire career I have only been a setter with the occasional hitting right side when we would play a 6-2. By default I would say my favorite position is setting.

Tell us about your Lion teammates. Who else has been this year’s standout players during this season?

I love my teammates. I have known most of them for a long time. Players like Tori Kuo and Elise Oertel I have known since 7th grade and other players I have gotten to know through club volleyball and going to middle school with some of them. They are very reliable and I can count on them to get the ball over and in play when we need it. Colleen Russell is a beast in the middle and I absolutely love playing with her. Setting her in the middle is always fun and we are very successful together.

Tell us about your relationship with your sisters, who played before you at NH, and their influence on your love of volleyball.

You continually come up in the top 10 in our NJP Player rater of all players in NJ overall. You are the whole package as a setter, blocker, server, defender, and on the attacker. Are you enjoying the 6-1 responsibility compared to the 6-2 format last season?

I absolutely love running a 5-1. Being in the front row is one of my favorite spots because if the ball is tight I have the option to go up and tip it over or try and pull it off the net. I feel less restricted when I’m in the front row. When I am in the back row setting for the 5-1 I love trying to fake out the blockers and give my pin hitters the chance to get a clean hit without a block. When there is an overpass I love going up and swinging at it and getting a block is the most satisfying thing to get as a setter. Serving is also one of my favorite things because I’m the only one who can control it and I love picking out difficult spots on the court and trying to hit them.

I do not plan on playing in college. Although I love volleyball I do feel like I need a little break from it. I would like to play club volleyball or intramural volleyball in college though. I plan on majoring in nursing and going to nursing school to become a Certified Registered Nurse Anesthetist.

Tell us about your experience at CJVA?

CJVA 100% shaped the player I am today. My coach, Andrea Salazar, for my final two years, had faith in me and helped me with my skills and made me the player I am today. She had confidence in me to get the job done and that made me have more confidence in myself. My other teammates from my 17’s and 18’s team inspired me as well. They would tell me how good of a set I had when they would have a really great kill to show me that they appreciated me as much as I did them. CJVA was a second home to me and I still believe that I would not have the skills I do today without my coaches

How have prior North Hunterdon standout players like Kyra Hissner and Devon Adamy shaped your volleyball career.

Kyra was a great friend and someone that I could go to for help or learn from just by watching her. She was a great leader for North Hunterdon. Devon Adamy was a great addition to my club team and together we were able to get a bid to nationals. I would say that players like Annie Schumann and Melanie Lloyd shaped my career in the best way by being a mentor to me in and out of volleyball. I could go to them for advice when I needed it and I could always talk to them.

I believe that attitude is definitely a factor in winning. If you don’t believe that you are the best, then how are your teammates and the other team going to believe. If you don’t challenge a call that was bad, how is the referee going to know that he made a mistake and that he should watch for the illegal skill the other team was doing. Trying to win and be the best takes attitude and determination in order to get the end goal.