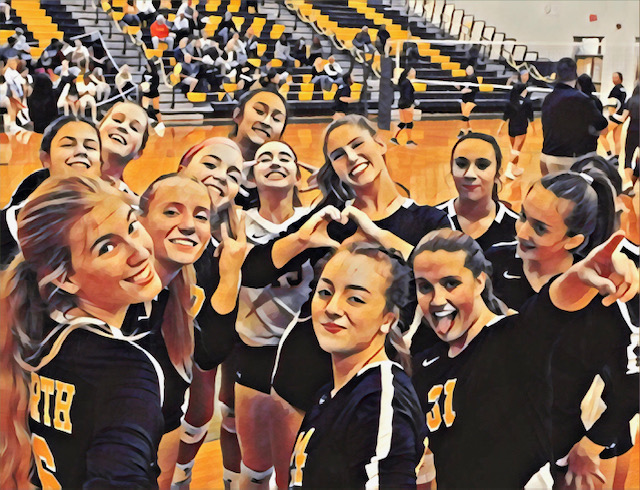 It’s cutoff day for state playoffs… Here are some important dates from the NJSIAA website:

Our internet came back on around 3AM last night but it was too late to get our blog done so we will cover some of those games in tonight’s edition.

It’s state cutoff day as evidenced by the massive schedule of teams trying to get that last game and final chance to build power points… The final game count could approach 90 today. As of right now… this is what the seeding will look like but totally unofficial as some teams may not enter or final calculations may reveal some movement up or down in some cases.

FOR FUN! NOT OFFICIAL!! Will be updated as we get closer to seed announcements on Friday!


Check out our daily “Accolades” page for the latest accomplishments of NJ high school volleyball players… Link at https://njpowerranking.com/accolades-nj-girls-high-school/

We are going to start tonight noting a major performance by Hunterdon Central. The Red Devils upset Ridge today powered by a 22 kill performance by junior Amanda Shirk. Amanda also put up 18 digs in the match. Amanda is now just 2 kills away from breaking the 200 mark in her career. HC lifted 82 digs over the three sets with an incredible defensive performance that helped secure them the win.

In the Essex County semi-final, MKA took care of MSDA in straight sets, 25-17, 25-14. MSDA was on a 7 game winning streak coming into the match and MKA was coming off their first loss of he season to Mount St. Mary on Monday. It was a nice turnaround for the Cougars who were fired up by Samiyah Abdur Rahim who bashed 12 kills and 10 aces for the match. Hailey Fouche added 10 kills. Amara Lerner had 22 assists for the winners. MKA will now take on Caldwell who upset Verona in their quarter-final. It was a straight set win for Caldwell who got 5 kills from Christine Infantolino, 4 kills from both Lulu Cecon and Iliana Acosta and 2 blocks and 2 kills from Ava Pannullo. The other semi-final will pit #1 seed Livingston against the winner of Newark Academy vs Millburn. Livingston rolled over West Essex to improve to 15-4 on the season.

St. Thomas Aquinas (18-3) was stunned tonight by Piscataway (6-12) in the first round of the GMC tournament. Andrea Enabosi was sensational for the Chiefs. The junior posted 12 kills, 6 aces, a block and 10 digs to inspire her team in a major upset. Andrea went by the 250 mark in career kills and also eclipsed 200 digs in her career. Here is Andrea’s recent interview with NJP… https://njpowerranking.com/2021/10/13/andrea-enabosi/ Olivia Alicante was stellar posting 20 kills, 3 aces and three blocks but it was not enough to prevent being upended. Danielle Suter had 30 assists for the Trojans. Both of those players are featured in our “accolades” page tonight for career achievements. Check it out at https://njpowerranking.com/accolades-nj-girls-high-school/.

Clifton improved to 19-2 as they overwhelmed league rival Bergen Tech in straight sets. Kate Louer is approaching 750 career kills as she finishes off her final year for the Mustangs. She is a sure first team Big North candidate.

Leonia polished off Lyndhurst in straight sets 25-20, 25-10. Leonia’s 4 losses this season are to teams who have a combined record of 66-13. They are a strong team in the NJIC. Lyndhurst had a big upset Monday as they took down once beaten Rutherford in straight sets. Leonia has a ton of weapons including seniors Jeila Seals, Sabrina Volis, and Jamie McPartland as well as juniors Sierra Addy, Abigail Boyd, Sofia Arzeno, and Ava Johnson.

Kinnelon outlasted Passaic Valley today in an extremely tight match. Lindsey Mills had 5 kills and 4 aces for the Colts. The Hornets were driven by Carissa Ostolaza who posted 7 kills, 9 digs, and 4 aces. Carissa is approaching 600 digs for her 4 year varsity career at PV which we expect her to achieve in Thursday’s match with Wayne Valley. Kinnelon improved to 10-7.

Lodi Immaculate put up a big finale before the state cutoff as they downed St. Mary’s Rutherford. They improved their record to 12-2 on the season as Brianna Kirland cracked 10 kills and thumped 5 big blocks over three sets. Amarie Avella and Anna Geisler raised the roof on defense with 21 and 16 digs respectively. Anastasia Pesantes had 23 assists and 3 aces for the winners. We love Lodi Immaculate in the non-public group B grid despite their lower seed expectation, we have them as the top rated team.

Gloucester Tech continues its hot streak today defeating Atlantic Tech in straight sets to improve to 20-3. Their three losses are to Williamstown twice and Paul VI. They have immense firepower with Alexis Caltabiano and one of the best setter in the high school game, Kyla Sayson. Leah Petroski slammed 9 aces today and 2 kills for GCIT. Alexis surpassed 200 kills for the season today. Kyla is not only near the top of all setters this Fall with 331 assists, but she already has 82 aces on the season.

Glen Rock came back after losing the first set and dumped Lodi in three sets. Super match by Hope Lagemann as she mashed 9 kills and 5 aces and also squashed 4 blocks. Glen Rock is now 12-3 and will look to excel at the state tourney.

Hoboken continued its resurgence winning their Hudson County tournament game today against Dickinson to advance to 11-5 on the season. It looks like Hoboken will come away with the #1 seed in in the Central Group 1 state playoff grid. It’s an amazing Cinderella story for this season as the Red Wings managed just one win over the past two seasons and now are at the top of their Group bracket!

Some interesting match-ups tomorrow… Old Tappan and Northern Highlands are the only two NJ teams to defeat Immaculate Heart in the past 5 years. Old Tappan takes on the Blue Eagles tomorrow and may have some additional incentive after Sunday’s cancelled matches to join together and knock off NJ’s #1 team. The math points to an IHA win but sometimes the script gets flipped when emotions runs high. We shall see tomorrow.

West Morris against Sparta should be a great match in the NJAC. We also have Paramus against Northern Highlands. Add Shawnee against Paul VI and we will have a lot to talk about in tomorrow’s blog!